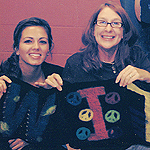 The seasonal spirit of “Peace on Earth” is reflected in the Peace Felt 2011 project by students in the MTSU Textiles, Merchandising and Design Program.

Students in the Textiles, Merchandising and Design Program at MTSU display segments of the "Peace Felt" project they created and sent to Foothills Fiber in Nevada City, Calif. Each student felted a letter of the phrase "Peace Be with You." Standing, from left, are Calvin Rose of Murfreesboro, Elizabeth Beasley of Camden, Alycia Gillaspie of Murfreesboro, Mikel Nguyen of Hendersonville and Daylin Taylor of Petersburg; kneeling are, from left, Taylore Massa of Smyrna, Professor Nancy Oxford, Drew Hulse of Lebanon (partially obscured), Leslie Stephens of Nashville, Jillian McDonald of Milan, Erica Gaudin of Mt. Juliet, Courtney Williams of Lebanon and Rakia Johnson of Whites Creek. (photo submitted)

This annual combination of classwork and craftwork links the students of Nancy Oxford, an assistant professor in the Department of Human Sciences, with two partner groups. One receives brightly colored felt creations from MTSU; the other gives MTSU its felt creations.

“Each student felted individual pieces that were combined to form a wall hanging symbolizing peace in other countries,” Oxford says of her students’ work. “Each student chose a letter of the words ‘Peace Be with You.’”

Peace Felt is an organization that creates connections around the world by promoting love and peace through textile art. It also promotes awareness of the ancient art of felt-making for its qualities of earth-friendliness, versatility and ease of learning.

“The students were very excited to be involved in this worthy project to spread their thoughts on peace in a creative endeavor worldwide,” says Oxford.