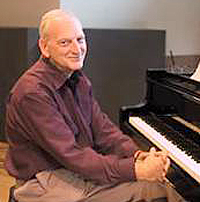 The Jerry Perkins Memorial Concert, honoring a longtime MTSU piano professor, is set for 3 p.m. Sunday, Sept. 16, in Hinton Hall inside the Wright Music Building on the MTSU campus.

The memorial concert, which is free and open to the public, will feature MTSU School of Music faculty members, including William Yelverton performing on guitar, Andrea Dawson on violin, soprano Christine Isley-Farmer, Deanna Little on flute, Todd Waldecker on clarinet, Christine Kim on cello and Lynn Rice-See on piano. The concert also will include Windell Little and Perkins’s former MTSU colleague Charlene Harb on piano.

Selections chosen for the afternoon performance include “Nightclub 1960” by Astor Piazzolla, “Zuignung” by Richard Strauss, “Hungarian Rhapsody” by Jeno Takåcs, “Trio in A major” by Joseph Kreutzer and “Trio Elégiaque No. 1 in G minor” by Sergei Rachmaninoff.

“This serious work, in one movement, showcases lyric playing by both violin and violoncello,” Rice-See said of the Rachmaninoff piece. “All three players combine to create the lush sonorities characteristic of Russian romanticism.”

Perkins received bachelor’s and master’s degrees in music from the College-Conservatory of Music at the University of Cincinnati, Ohio, and his doctorate from Boston University. For more than 40 years at MTSU’s School of Music, he was professor of music, head of the piano faculty and co-founder and artistic director of the Stones River Chamber Players.

Perkins made his professional debut as a concert pianist at New York’s Town Hall, and his career included playing concerts throughout the United States and Europe. He also took tremendous joy and pride as a teacher whose students have won many competitions, been accepted into graduate schools throughout the country and are themselves, in many cases, teachers.

“Jerry was a dear friend and colleague,” said Dr. Raphael Bundage, MTSU professor of choral music. “We all miss him greatly.”

For more information on any MTSU School of Music performances, please call 615-898-2493 or see the complete listing of concerts at www.mtsumusic.com at the “Concert Calendar” link.