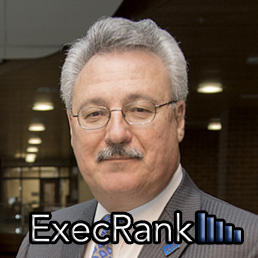 Bruce Petryshak, MTSU’s vice president for information technology and chief information officer, has been named one of the top CIOs in the country, according to ExecRank’s “Top CIO Rankings” for 2012.

According to the California-based executive ranking service, there are over 38,000 CIOs in the United States and “only the very best are awarded the distinction” of inclusion in ExecRank’s listings, which can be found at www.execrank.com.

Petryshak, who leads MTSU’s Information Technology Division, was ranked No. 83 out of 213 CIOs listed in the category of “Top Private Company CIOs.” You can read the complete list here.

The rankings are the result of two years of research and feedback from evaluation committees and top chief information officers that yielded an algorithm for how to rank CIOs based on their performance in 24 key areas.

Petryshak came to MTSU in August 2010. Before that, he was chief information officer at Bowling Green State University in Ohio for nine years.

Petryshak also served in the Information Technology Division at Kent State University where he was executive director of University Information Systems. He has held positions in all areas of information technology.

“Mr. Petryshak has a long record of success in leading the information technology departments at many of the nation’s finest educational institutions,” said Adam Navrozally, analyst for the rankings division of ExecRank.

“He has had a variety of roles in IT in the past, and his experience gives him a unique perspective in bringing higher education into the digital age. He is highly regarded in his industry, and amongst other chief information officers.”

Petryshak holds a bachelor’s degree in business administration, computer sciences and a Master of Business Administration from Kent State University.

ExecRank screened more than 15,000 private company CIOs in the United States to compile the ranking.

“The number one area of focus for CIOs in 2012 has been their success in advising their CEO and CFO on leveraging technology to drive business performance,” Navrozally said. “ExecRank weighed heavily the recommendations provided by CEOs of our finalists.”

MTSU President Sidney A. McPhee said he was pleased, but not surprised, by the honor for Petryshak.

“He firmly believes in the power of information and how its proper application and use can transform organizations. But he also never forgets that everything we do at MTSU begins with a devotion to student success — and he contributes to that vision and mission through his work.”