In the News: MTSU experts on f.. 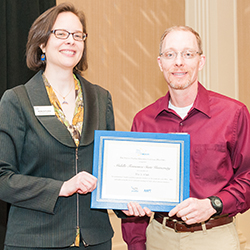 MTSU’s Department of Physics and Astronomy has become a member of an exclusive club.

PhysTEC Director Monica Plisch, left, presents MTSU Department of Physics and Astronomy chair Ron Henderson with a certificate proclaiming MTSU as a member of The 5+ Club. The national recognition comes to universities for their contributions to producing at least five physics educators in a given year. Awards were presented March 12 in Baltimore, Maryland. (PhysTEC photo courtesy of Ken Cole)

The inaugural PhysTEC designation recognizes a group of institutions that have graduated five or more physics teachers in a given year.

Physics and astronomy chair Ron Henderson said the department “started a concerted effort to improve our teacher education program in 2008.”

“Some courses were redesigned, three new physics teaching classes were added, and we won a National Science Foundation grant to fund scholarships for future teachers,” Henderson added. “The end result is that we have graduated more than 10 highly qualified physics teachers since 2011.”

“Middle Tennessee State University is a national leader in physics teacher education, and we have invited PhysTEC site leader Ron Henderson to give presentations at national meetings” Plisch said. “We need more universities to follow the lead of MTSU to address the severe shortage of high school physics teachers.”

In an email to MTSU President Sidney A. McPhee, Plisch said she was “happy to congratulate Middle Tennessee State University on its outstanding contributions to the education of future physics teachers.”

Plisch told McPhee the great majority of institutions graduate less than two physics teachers a year. The most common number of graduates is zero.

“Graduating five or more physics teachers a year is a significant achievement,” she said.

In a letter to McPhee, co-written by Homer Neal, American Physical Society president from the University of Michigan, and Janelle Bailey, American Association of Physics Teachers from Temple University, MTSU was lauded “for its excellence in physics teacher education and for serving as a national model for STEM teacher preparation.”

STEM is an acronym for science, technology, engineering and mathematics.

To learn more about the physics program, which is a part of the College of Basic and Applied Sciences, visit www.mtsu.edu/programs/physics or call 615-898-2130.

The PhysTEC 5+ Club and each institution’s number of graduates includes: