For 2019, the MTSU Alumni Association has gone retro with its location for the annual Pigskin Pregame, the unofficial kickoff to the Blue Raiders football season.

Moving back to individuals’ homes where “Pigskin” was held in times past, this year’s event will be held starting at 6 p.m. Saturday, Aug. 10, at the home of Jonathan Harmon (Classes of 2003 and ’04), 746 E. Main St. in Murfreesboro. Parking will be available at Central Magnet School and First Cumberland Presbyterian Church on Bilbro Avenue. 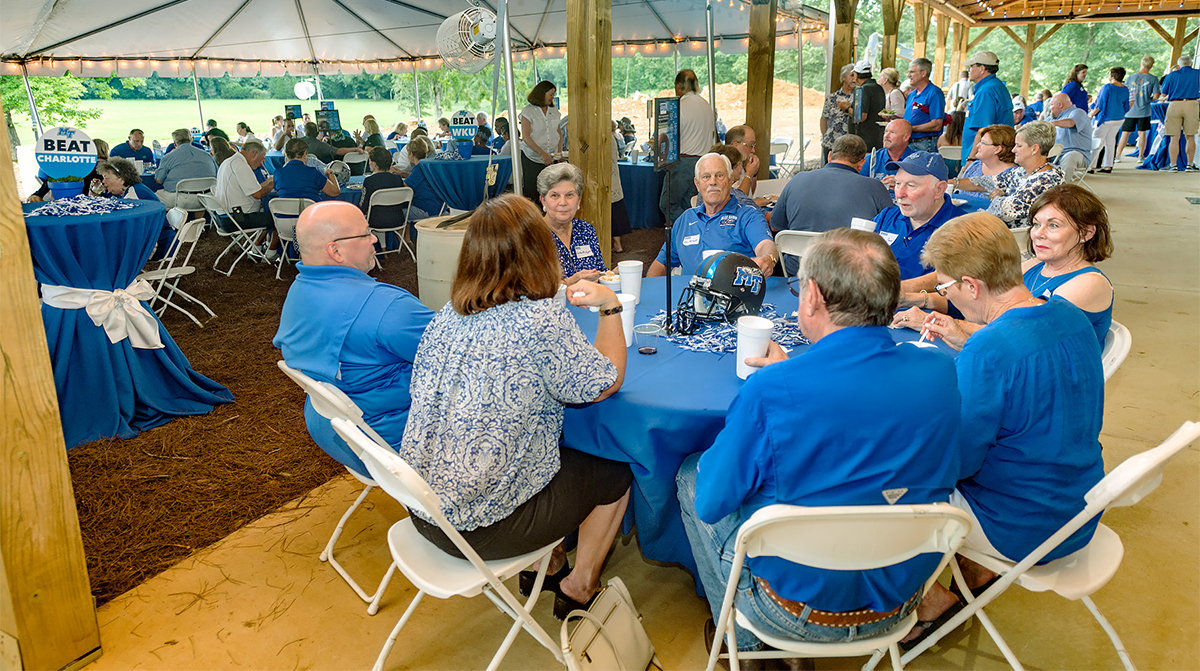 MTSU alumni and friends enjoy food, beverages and conversation during the 2018 Pigskin Pregame last August at Hop Springs Beer Park, which is partnering with MTSU fermentation science. This year’s “Pigskin” will be held at 6 p.m. Saturday, Aug. 10, at the home of Jonathan Harmon, 746 E. Main St., in Murfreesboro. The deadline to register is Aug. 2. (MTSU file photo by Eric Sutton)

Tickets are $35 per person and can be purchased online at www.mtalumni.com/pigskinpregame2019. Fans and alumni are welcome to buy tickets and enjoy the food, beverages and catching up with friends. Reservations deadline is Friday, Aug. 2.

“Pigskin Pregame is a Blue Raider tradition,” said Blaire Buergler, Office of Alumni Relations assistant director. “It’s an exciting day and time of year. Commencement will be held that morning and new and returning students will be arriving on campus two weeks later to start a new academic year.”

Harmon is “graciously opening his front and backyard” for the occasion, Buergler said. “We’re excited to be on Main Street and excited to be at Jonathan’s house,” she added.

“I’ve attended several ‘Pigskins’ and have been a sponsor of the event for many years,” said Harmon, who earned his bachelor’s in business administration in entrepreneurship and added a master’s degree in business education a year later.

“I love getting together with fellow Blue Raiders to celebrate the forthcoming season and giving back to my alma mater by raising money for future alums,” he added. “I’m honored to be able to host Pigskin this year, and I can’t wait to look out at my backyard and see a sea of blue. You won’t want to miss the party.”

Pigskin Pregame is an annual fundraiser for the Alumni Legacy Scholarship, which is awarded to children and grandchildren of MTSU alumni, Buergler said.

The Alumni Association will award $1,000 scholarships — $500 in the fall and $500 in the spring semester — to students again this year. Eligible sophomores, juniors and seniors are considered. Pigskin Pregame has raised more than $80,000 during the past nine years. 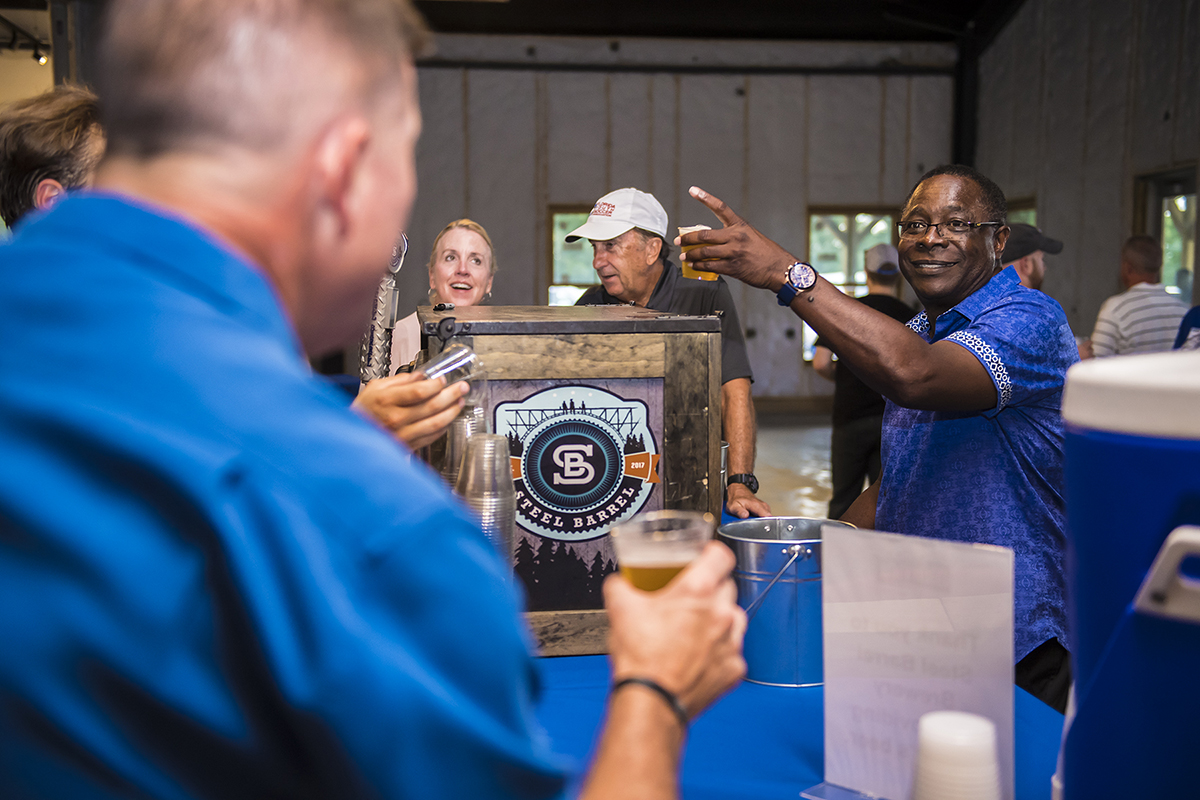 MTSU President Sidney A. McPhee, right, raises a toast during the 2018 Pigskin Pregame event last August at university fermentation science partner Hop Springs and Steel Barrel Brewery, once again a beverage sponsor for this year’s “Pigskin” event. It will be held at 6 p.m. Saturday, Aug. 10, at the home of Jonathan Harmon, 746 E. Main St., in Murfreesboro. (MTSU file photo by Eric Sutton)

In addition to football coach Rick Stockstill, head coaches in other sports at MTSU are likely to attend the event.

Music will be provided by recent graduates Lydia MacDavid (’19) and Bria Williams (’18), who were recommended by College of Media and Entertainment professor Odie Blackmon.

Food will be catered by Slick Pig Bar-B-Q. Beverages will be provided by Steel Barrel Brewery at Hop Springs, the 2018 Pigskin Pregame host, and Stones River Total Beverages. The J. Harmon Home Team of Keller Williams and First Tennessee Bank are platinum-level sponsors.

The Blue Raiders open the season at 6:30 p.m. Saturday, Aug. 31, at Michigan in Ann Arbor. Their home opener in Floyd Stadium will be at 6 p.m. Saturday, Sept. 7, against local rival Tennessee State University. The game will be a reunion for former MTSU players. 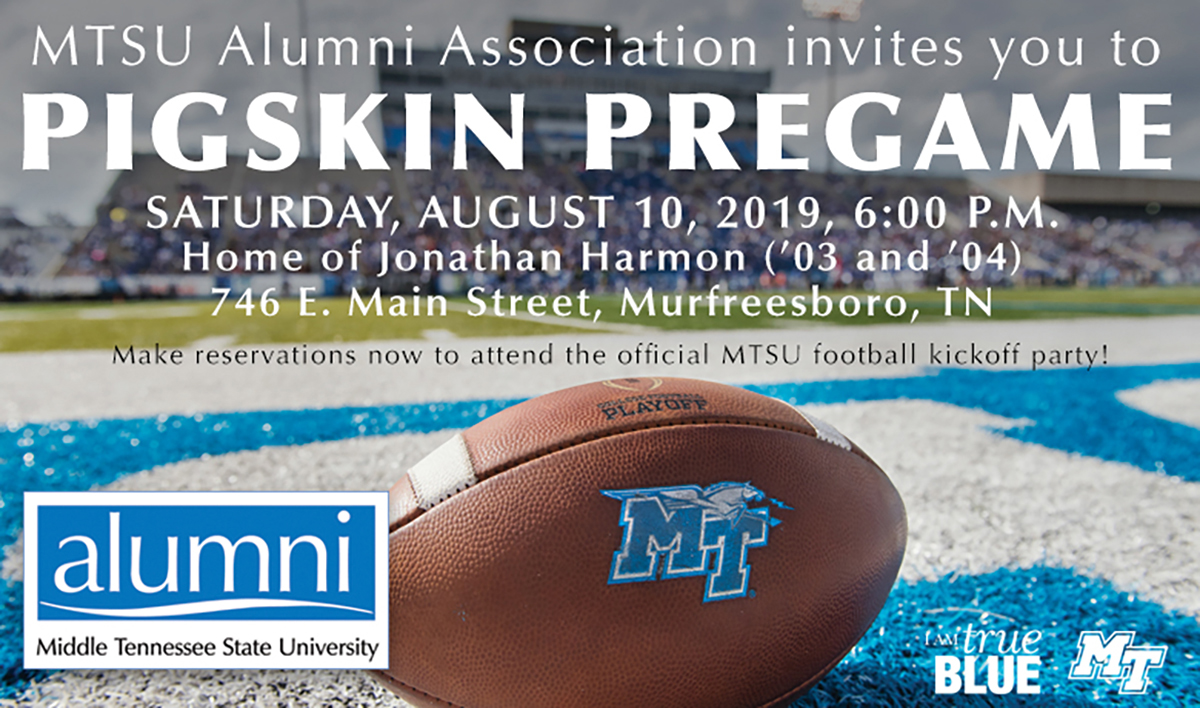