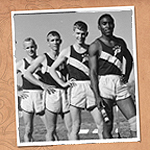 Some of MTSU’s first black students will discuss their groundbreaking experiences at The Pioneer Summit, an MTSU Black History Month event, at 6 p.m. Monday, Feb. 27, in the Tom H. Jackson Building.

Among the pioneers scheduled to attend:

This event, which is sponsored by the MTSU Black History Month Committee and the Centennial Celebration Committee, is free and open to the public.