Property donation will give st.. 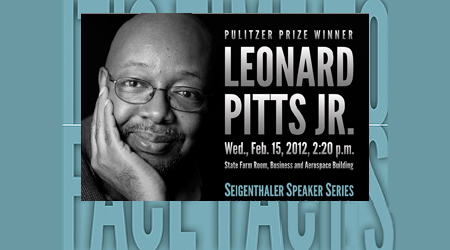 Some grizzled old city editors in the newsroom would tell reporters to “never let the facts get in the way of a good story.” Leonard Pitts Jr. wouldn’t have lasted long in those newsrooms.

Fortunately, Pitts, a Pulitzer Prize-winning columnist, has spent much of his storied career at The Miami Herald, where facts are the story. His Feb. 15 lecture at MTSU, “Owning What You Know,” made it clear that he has no truck with the alarmingly increasing willingness to substitute opinion, and sometimes even lies, for truth in our democracy.

Miami Herald columnist Leonard Pitts makes a point during his Feb. 15 lecture at MTSU, sponsored by the Seigenthaler Chair of Excellence in First Amendment Studies. (MTSU photo by Andy Heidt)

“Facts lead you to the truth, but if your facts are untrustworthy, where will that lead?” Pitts asked a crowd of more than 225 students, faculty and community members in the State Farm Lecture Hall inside the University’s Business and Aerospace Building.

“When you repeatedly lie, make things up and pass it off as fact, it threatens grave damage to our life as a nation. … No matter how ridiculous the tale, it can directly affect the way people perceive the state of our union and act.”

Citing a maxim often attributed to Mark Twain, “A lie can travel halfway ’round the world while the truth is putting on its shoes,” Pitts has special disdain for those who use the power of the Internet to spread questionable information.

“It’s clear that we are living in an alternate reality. If we are both searching for truth using the same body of basic facts, we may never agree, but we can make a good-faith argument. If your facts are here and mine are there, however, we can never agree. We might as well stop talking, because we don’t even have the same foundation from which to argue.”

Pitts compared some comments made today with those made in the George Orwell novel of a futuristic society, 1984.

“‘Facts are optional. Facts are not important. Facts are whatever we say they are,'” the author cited. “Our problem is not coarseness or hyperpartisanship; our problem arises from incoherence. The larger fight is between logic and illogic, between intelligence and the lack of it.”

Pitts’ lecture, part of MTSU’s Seigenthaler Speaker Series, was sponsored by the Seigenthaler Chair of Excellence in First Amendment Studies in the College of Mass Communication.

Pitts joined the Miami Herald in 1991 as its pop music critic; in 1994, he started writing his syndicated column on pop culture, social issues and family life. He won the Pulitzer for “fresh, vibrant columns that spoke, with both passion and compassion, to ordinary people on often divisive issues,” according to the Pulitzer citation. Pitts was a Pulitzer finalist in criticism in 1993.

Pitts also wrote, produced and syndicated “Who We Are,” an award-winning radio documentary on the history of black America. He’s written and produced several other radio programs on topics from Madonna to Martin Luther King Jr. Pitts was also a writer for Casey’s Top 40, Casey Kasem’s radio countdown show.

His first book, Becoming Dad: Black Men and the Journey to Fatherhood, was released in 1999 and was followed by his critically acclaimed first novel, Before I Forget, in 2009. A collection of his columns, Forward From This Moment, was published that same year. His second novel, Freeman, is due out in May.

Watch an excerpt from Pitts’ lecture below.