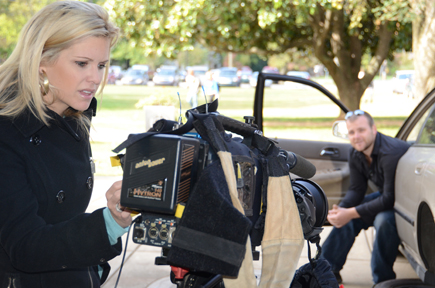 On Nov. 17, Perry and his students were featured on the national Fox News Channel. Perry is an MTSU professor and Russell Chair of Manufacturing Excellence chair holder in the Department of Engineering Technology.

The piece was taped Oct. 9, but delayed for airing because of the presidential election coverage and Hurricane/Superstorm Sandy. Perry said he is pleased to know it finally will air, but has a forward-thinking approach concerning its contents.

“I just hope it creates some funding,” Perry said. “I hope it gets visibility and enthusiasm to get some funding.”

Perry said he and Tennessee Board of Regents university counsel Lou Svendsen have been working for months to try and secure major funding for the project, which has been shown to cut fuel usage by 50 to 100 percent in a 1994 Honda station wagon.

Prann said working on the story with Perry and MTSU graduate students Jay Perry (no relation) and Brent Brubaker “was a great experience.”

“The folks at MTSU are very accommodating,” Prann said. “Dr. Perry and his young team are a group of very bright individuals. It’s a story our audience will really enjoy.”

Prann said she anticipates public reaction once the story airs.

“We always get great reception on stories that involve entrepreneurs and new inventions,” she said. “Also, I think our viewers will enjoy seeing an American-made product.”

Charles Perry said he is apprehensive about the national and online exposure because it likely will lead to emails and phone calls by the general public wanting to purchase the kit. Presently, it is not available to the public and it appears to be several years away from mass production.

While Prann was at MTSU in October working on the story, Perry learned that she has a special attachment for automobiles because her father, John R. Prann Jr. has passion and working knowledge he passed onto her.

“I enjoy working on automobile-related stories because it reminds me of him,” said Elizabeth Prann, who is married to Baltimore Orioles’ relief pitcher Darren O’Day.