Administered by the training company Defend Systems and offered through the Tennessee Higher Education Commission, the course was broken down into two separate two-day classes to allow for adherence to COVID-19 social distancing guidelines. 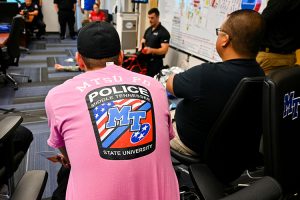 Buddy Peaster, MTSU’s chief of police, voluntarily reached out to the commission to host the training on campus for his officers and other local stakeholders. 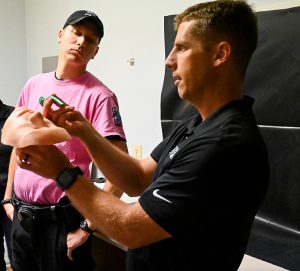 Lt. Andrew Bennett, left, watches as an instructor from Defend Systems demonstrates how to insert a nasopharyngeal airway during a tactical emergency casualty care training on the MTSU campus on Sept. 17, 2020. (MTSU photo by Stephanie Barrette)

“The hands-on portion is invaluable,” said MTSU Sgt. Patrick Fajardo about the class. The officers get to “actually put on a tourniquet” and practice other lifesaving techniques in a highly realistic environment.

Paul Marshall, THEC director of facility planning, explained that one of the commission’s goals is “to provide campus stakeholders with the safest, most secure location for learning to occur” while keeping the campus environment “welcome” and “open.”

When he first heard Brink Fidler, the founder and president of Defend Systems, speak, he thought Fidler seemed “like a perfect fit” to aid in the state’s goal of increasing campus safety.

The training originated in the military, was adjusted to be law enforcement friendly by the National Association of Emergency Medical Technicians and incorporated into Nashville’s police academy.

It aims to teach prehospital providers how to respond to and care for patients in a civilian tactical environment with skills such as applying a tourniquet, applying a chest seal and more. It walks officers through how to assess and treat a victim from the first interaction with immediate interventions to the evacuation or turnover to other medical personnel. 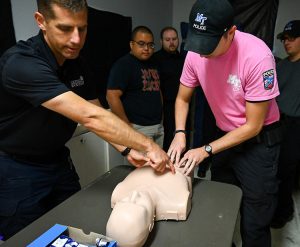 “Since they (the Nashville police) started doing it as part of their training academy two years ago, they’ve saved over 300 people in Nashville,” said Fidler. “It’s unbelievable.” The survival rate in Nashville has “gone through the roof…. The medics get there, and they don’t have to do anything. All the prehospital care is done.”

Fidler’s team has learned to accommodate the training to current safety protocols. “Law enforcement training doesn’t stop because of COVID-19,” he explained. “Being well-trained is very important right now. We have to do better and more training.”

Before entering the class, MTSU’s officers and others attending had their temperatures checked by a specialized camera. Masks were worn during the up close and personal role-playing scenarios.

“This type of training is most important in a setting of a campus community,” said MTSU’S Fajardo. “Faculty, staff and other community members like students and us are going to be the first responders. Thirty seconds of being able to render aid” could save someone’s life. “It’s extremely important for our community.”

“Bleeding control and prehospital care are the reasons we had an 86% survival rate after the Las Vegas shooting,” said Fidler, who’d like to see more officers receive such training nationwide. “These guys (police officers) crave this knowledge to be able to act instead of watching somebody bleed to death. We can teach it to anyone. It’s simple. It’s easier than CPR.” 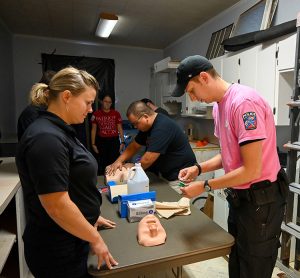 William Dean, an assistant instructor for Defend Systems and Nashville police officer, added that it gives officers the ability to “help in more ways than just arrests, citations and stuff like that.”

“I wish there was a lot more light shone upon the amount of medical training that law enforcement is doing and the number of saves,” said Fidler.

Any visit to MTSU will find university police highly visible on patrols and ready to respond to emergencies at a moment’s notice.

“We’re the first responders if something were to happen,” explained Fajardo. “If we can take care of the most dangerous injuries, we can increase the chances of survival a lot more.”