Get involved! MTSU home to myr.. 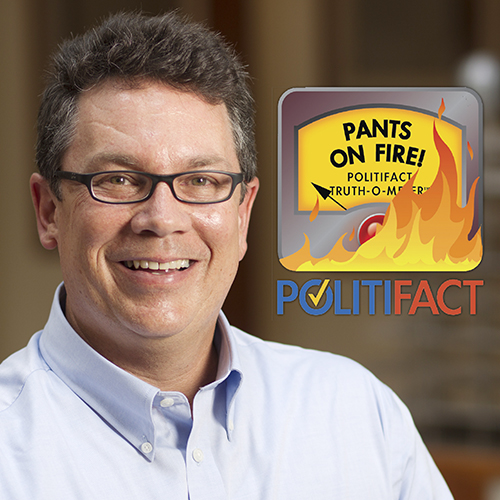 There are facts, and there apparently are “alternative facts,” and the founder of the Pulitzer Prize-winning informational website Politifact has plenty of both to share from the 2016 election during a free public event set Thursday, Feb. 2, at MTSU.

Bill Adair will discuss the future and relevance of fact-checking in “Pants on Fire: A Fact-Checker’s Tales from the 2016 Election” at 11:20 a.m. Feb. 2 in the Parliamentary Room, Room 201, of MTSU’s Student Union.

A searchable, printable campus parking map is available at http://tinyurl.com/MTSUParkingMap. Off-campus visitors attending the lecture can obtain a special one-day permit at www.mtsu.edu/parking/visit.php.

The event is part of the Pulitzer Prize Series sponsored by the John Seigenthaler Chair of Excellence in First Amendment Studies and the College of Media and Entertainment at MTSU.

Adair started Politifact.com, a project operated by the Tampa Bay Times in conjunction with the Congressional Quarterly, in 2007 when he was Washington bureau chief for the Times. Since then, Politifact has expanded to state-focused projects with the Austin-American Statesman in Texas, Florida’s Miami Herald, The Atlanta Journal-Constitution, The Providence (Rhode Island) Journal, the Milwaukee Journal Sentinel, the Richmond (Virginia) Times-Dispatch and The Oregonian.

The site investigates and rates the accuracy of claims of elected officials, political candidates “and others who speak up in American politics.” Politifact won the 2009 Pulitzer Prize for National Reporting for its coverage of the 2008 U.S. presidential campaign.

In determining the award, the Pulitzer committee praised Politifact for “its fact-checking initiative during the 2008 presidential campaign that used probing reporters and the power of the World Wide Web to examine more than 750 political claims, separating rhetoric from truth to enlighten voters.”

Adair recently said that fact-checking organizations like Politifact and FactCheck.org still have record traffic and reached new levels of prominence during the 2016 presidential campaign. Unfortunately, he said, fact-checkers were slow to recognize the “onslaught of fake news,” and he predicts that 2017 will be “the year of the fact-checking bot.”

Adair, who also serves at Duke University as Knight Professor of the Practice of Journalism and Public Policy and the director of the DeWitt Wallace Center for Media and Democracy, plans a similar talk in Nashville at 6 p.m. Feb. 2 at the John Seigenthaler Center, located at 1207 18th Ave. S. on the Vanderbilt University campus. His appearance there will launch the Seigenthaler Series, programs presented by the First Amendment Center of the Newseum Institute to explore emerging issues involving the media and America’s fundamental freedoms.

A reception will follow Adair’s Nashville talk at 7 p.m. Organizers of that event are encouraging visitors to RSVP at www.newseum.org/events-programs/rsvp3 because space is limited.

MTSU established the Seigenthaler Chair of Excellence in First Amendment Studies in 1986 to honor the iconic journalist’s lifelong commitment to free expression. The Seigenthaler Chair supports a variety of activities related to topics of concern for contemporary journalism, including distinguished visiting professors and visiting lecturers at MTSU, research, seminars, and hands-on training for student journalists.

You can learn more about MTSU’s John Seigenthaler Chair of Excellence in First Amendment Studies at http://mtpress.mtsu.edu/firstamendment.