MTSU students take research to ‘Posters at the Capitol’ 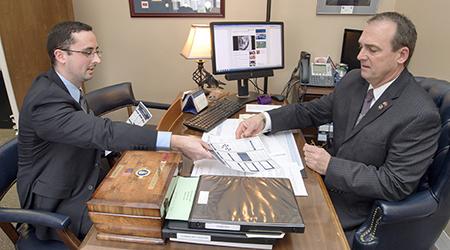 MTSU senior Paige Stubbs plans to be an educator after graduating and already has a heart for the young people she eventually will be teaching.

The planned visit allowed them the chance to meet, ask questions and discuss their research with their state lawmakers.

“She (DeBerry) said we have to motivate our students,” said Stubbs, who like DeBerry is from Memphis. “My goal is to motivate students to like math and science.”

Part of Stubbs’ research interest came from her participation in the McNair Scholars and Tennessee Louis Stokes Alliance for Minority Participants programs at MTSU.

“It gives me encouragement to see students thinking outside the classroom and outside the box,” Ketron said of the next generation of researchers.

MTSU senior Jordon Dodson of Murfreesboro said it was a “privilege to represent your university. It’s a chance to meet other students who are at the top of their classes. One day, I’ll see them in the workplace. They’ll go on to be researchers. We all have the same interests and all want to go on and be scientists.”

MTSU senior Josh Horvath, left, an economics and math major, talks with state Rep. Rick Womack, R-Rockvale, about his research on the impact of tort reform on medical decisions at the Feb. 13 “Posters at the Capitol” event.

Dr. Andrienne Friedli, chemistry professor and director of the Undergraduate Research Center, said it is “an honor to be selected” to participate in Posters at the Capitol but also a challenge.

“They usually present at trade conferences,” Friedli said. “Here, they were talking to lay people. They were bringing their research to a level others understand.

“They have an audience of politicians who care about the impact on the taxpayer. All of the students get to see how the legislature works, what the politicians do on a daily basis and see democracy in action.”

Dr. Tom Cheatham, director of the Tennessee STEM Education Center at MTSU, said an unexpected turn of events occurred when state Rep. Brenda Gilmore, D-Nashville, “invited the whole group into the House chambers and practiced being a representative.

“She (Gilmore) proposed a bill and they all got to vote. It was not something planned, but it was a great idea on her part.”