Secret Service looks for ‘a fe.. 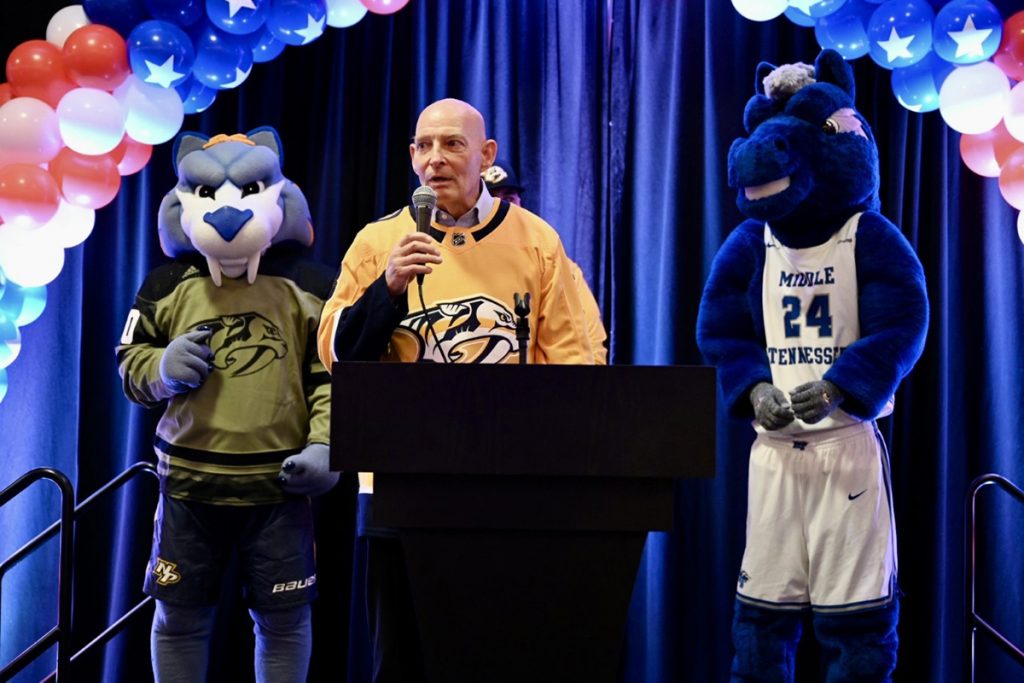 Flanked by Predators’ mascot Gnash, left, and MTSU’s Lightning, retired U.S. Army Lt. Gen. Keith M. Huber addresses a pregame crowd attending the Preds’ Military Appreciation Night featuring the university’s Daniels Veterans Center. “The (Nashville) Predators demonstrate the success of teamwork, controlled aggressive actions and continuous tenacity when facing adversity,” Huber said. “They’re predators, like (military) we are when we need to be, to hunt out evil people who would attempt to steal our freedoms, harm our democracy and punish our families.” (MTSU photo by James Cessna) 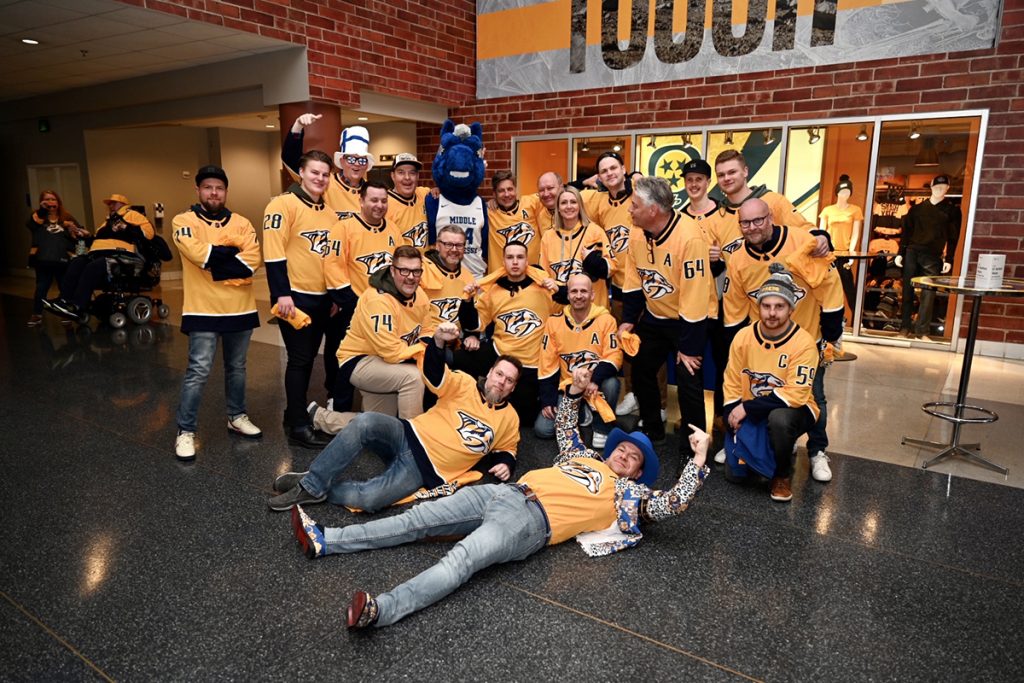 A group of MTSU fans attending the Tuesday, March 8, Nashville Predators-Dallas Stars NHL game on Military Appreciation Night pose with Lightning before the game. MTSU’s Daniels Veterans Center was featured before and during the contest, won by Nashville, 2-1. (MTSU photo by James Cessna)

Since 2017, the partnership between the Daniels Center and the Predators has blossomed, as the NHL club has become a major supporter of the MTSU center, home to more than 1,000 student veterans and family members.

“From my foxhole perspective, the Preds are a perfect partner match for our Daniels Center as well as our military overall,” said Huber, MTSU senior adviser for veterans and leadership initiatives who served 38 years in the military, retiring as a lieutenant general.

“The Predators demonstrate the success of teamwork, controlled aggressive actions and continuous tenacity when facing adversity,” Huber added. “They’re predators, like we are when we need to be, to hunt out evil people who would attempt to steal our freedoms, harm our democracy and punish our families.

“These are factors which our military and their precious families clearly comprehend. The Predators provide significant support for our Daniels Center, which assists our military in transition home. So, I love this interaction with the Predators. They serve the veteran community superbly.”

The center is a one-stop-shop for all student veterans and family members, from providing help with VA benefits to connecting them with potential employers while they attend MTSU and as they graduate into careers in the next phase of their lives. 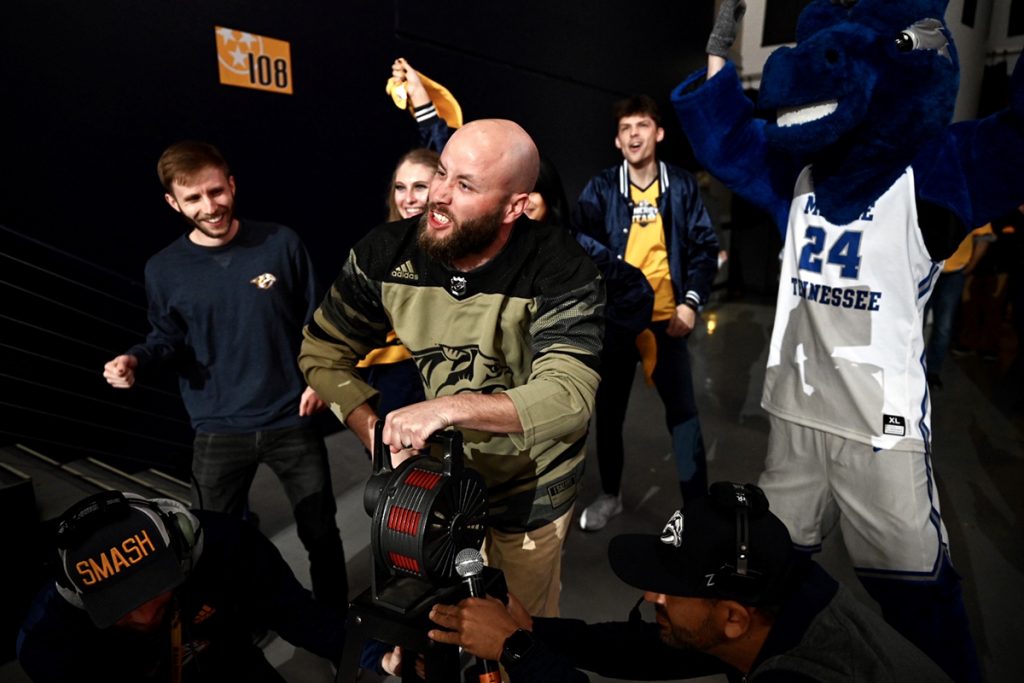 Success stories all in the (Farmer) family

MTSU senior Orrin Farmer, 30, an aerospace professional pilot major planning to graduate in August, is one of the Daniels Center’s success stories. In addition to his academic studies, he works at the MTSU Flight Operations Center as a flight instructor and in maintenance. He was selected as a Predators’ fan captain (as was Huber earlier) during the second period intermission.

“I’m super blessed and honored they chose me to represent the MTSU veterans community and super excited they (Predators) are donating to MTSU’s veterans center,” said Farmer, who was joined by his wife, Holly, at the game.

In March 2020, the Predators launched Ford Military Salute Week by announcing the partnership with MTSU and the Daniels Center, raising support for the local population of military-connected students who struggle financially to reach their higher education and career goals.

Preds’ fans and anyone in the community interested in contributing to The General’s Fund in honor of Ford Military Salute Week can text PREDS4MTVets to 41444 on their mobile phone or visit the MTSU Foundation website — www.mtsu.edu/give. The Predators established the fund to recognize Huber and his military career. 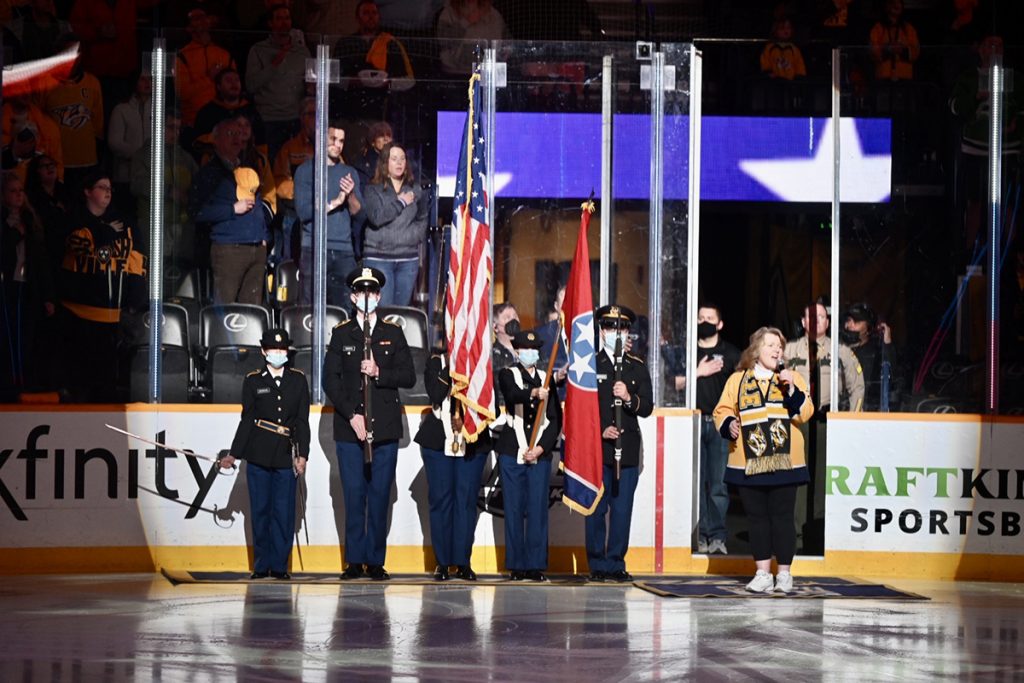 Members from the MTSU Military Science ROTC program participated as members of the color guard during the pregame national anthem.

Other Nashville events featuring the Daniels Center this spring include:

• The Grand Ole Opry’s annual Salute the Troops concert will be Tuesday, May 24. The show begins at 7 p.m., but military-related activities will start at 4 p.m. 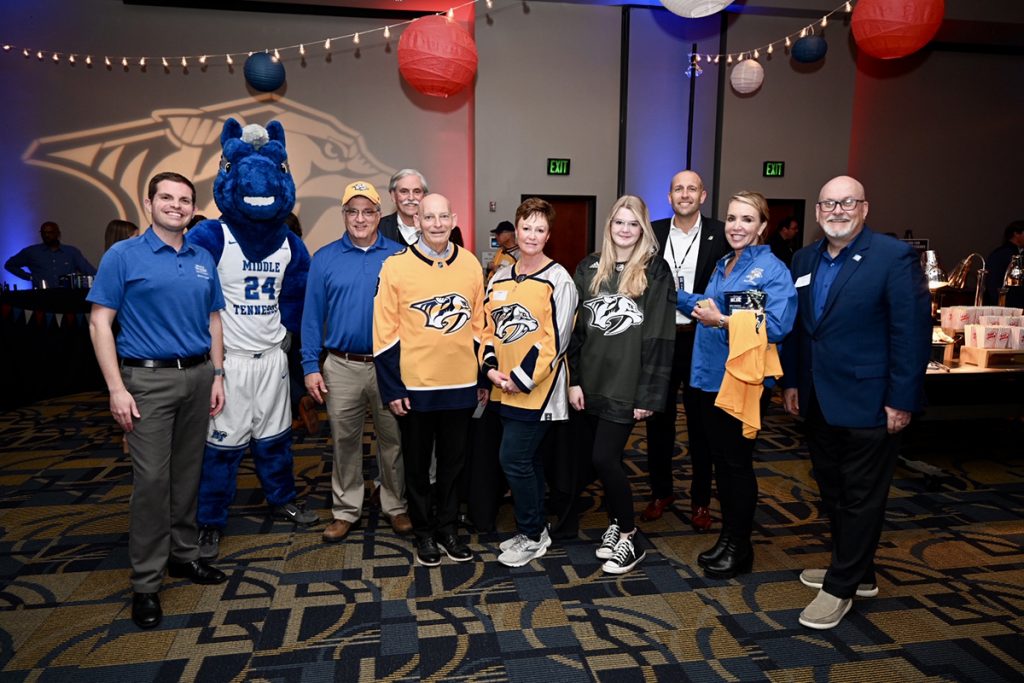