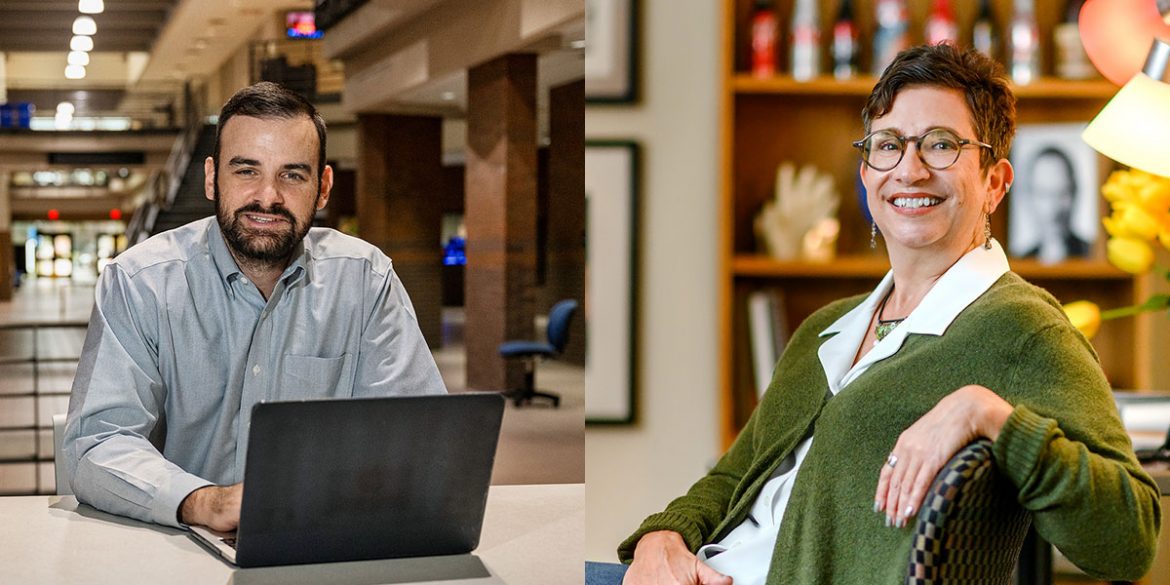 When University officials decided a student-led Covid-19 campaign was needed to help normalize wearing a mask and social distancing, two professors from the College of Media and Entertainment were up for the challenge of assembling a team of students and over-seeing the months-long project.

“Why we’re a good team – Matt Taylor and I – is because we balance each other’s strengths out. His background is PR and, he knows a lot about social media and has done a lot through sports and nonprofits. He’s very fluent in that, and he is good at writing and getting students to write well. My background is creative and visual storytelling and advertising. The two of us found that we work really well together,” said Leslie Haines.

Together the two recruited six students who ultimately came up with the “Defend True Blue” campaign.

“I think they were honored to be chosen, and it showed we had faith in them, which we did because they had proven themselves in other classes,” said Haines. 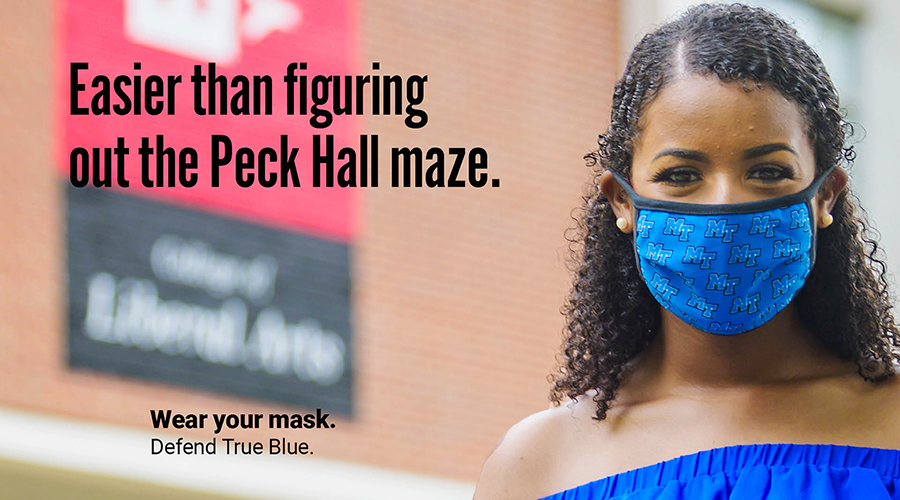 An MTSU student is shown wearing a mask outside the Peck Hall academic building to protect herself and others from potential COVID-19 exposure in this image from a fall semester School of Journalism and Strategic Media student public relations and advertising campaign to encourage other students to remember to wear their masks. Each of the promotional images, used in yard signs, bus shelters and digital screens scattered across campus as well as in videos and on social media, has a different, humorous sentence noting that wearing a mask is easier than some MTSU-specific task, including “catching the bus for an 8 a.m. class,” “making it to art class on time from the STU,” “budgeting your Flexbucks” and this one, “Easier than figuring out the Peck Hall maze.” The same campaign slogan is at the bottom of each image “Wear Your Mask. Defend True Blue.” (MTSU photo by Andy Heidt)

The campaign, which normalizes wearing a mask and social distancing, came together after a lot of research and brainstorming, including a conversation with Health Communication faculty members. The messaging compares the ease of mask wearing to relatable challenges students face on campus. It answered the call to develop a campaign that says, “We’re all in this together” without actually using those words.

Haines added, “The excitement was just palpable through Zoom, and that’s when we knew we had it. We could do a whole campaign of one-liners with that tongue and cheek, ‘Hey, we get you… it’s not ideal, but we can all do this.”

From there, the idea was pitched to the University’s Marketing and Communications Office, and later MTSU President Dr. Sidney McPhee, Provost Mark Byrnes, and other University leaders via Zoom.

The student-led presentation was built in Google Slides so everyone could contribute.

“Matt and I made sure it was professional. Everything was based on research. When things come out of research, you have a much better defense to your solution, and that’s exactly where it all came from,” Haines said. 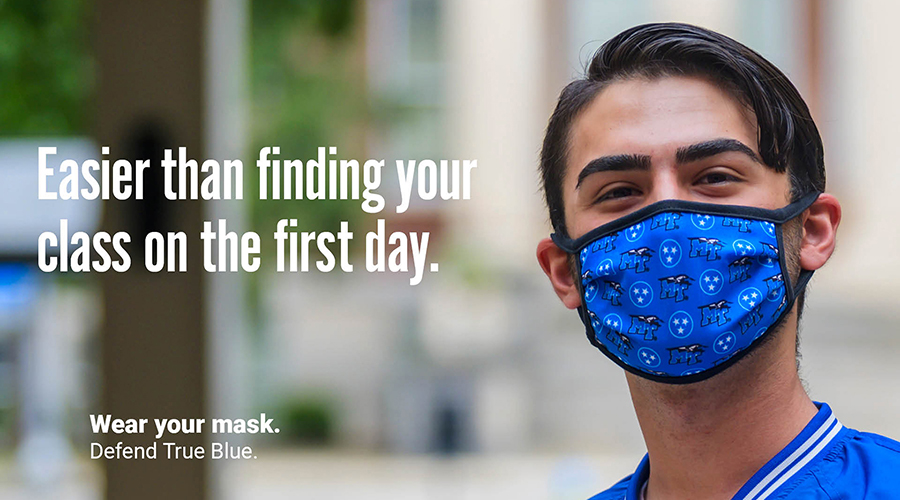 MTSU senior physiology major Dirhat Mohammed of Antioch, Tennessee, wears a mask in this “Defend True Blue” promotional image to encourage other students to wear their masks on campus. Each image created by the fall 2020 School of Journalism and Strategic Media student public relations and advertising campaign is used in different forms across campus and on social media with a different MTSU-specific one-liner. The campaign slogan, “Wear Your Mask. Defend True Blue,” is part of each image. (MTSU photo by Andy Heidt)

In the days leading up to the presentation with Dr. McPhee and other MTSU administrators, Haines and Taylor said the students were nervous.

“They were so nervous right before the presentation. The day before – I mean, I was nervous,” Haines recalled. “I can’t imagine being a student and having to do it. But you couldn’t tell when they presented, they were so smooth and calm. I think they felt confident in the work and that makes a big difference.”

But during the high-pressure presentation with University officials, Haines and Taylor said they were so proud of the work the students were showing.

“Leslie and I were impressed with the team’s work throughout the campaign and knew they had landed on a strong concept,” Taylor said. “We weren’t the most important audience, though. They had to earn the support of the client, which in this case was the president and his executive team. It was thrilling to watch them rise to the occasion and represent themselves and their work so well.” 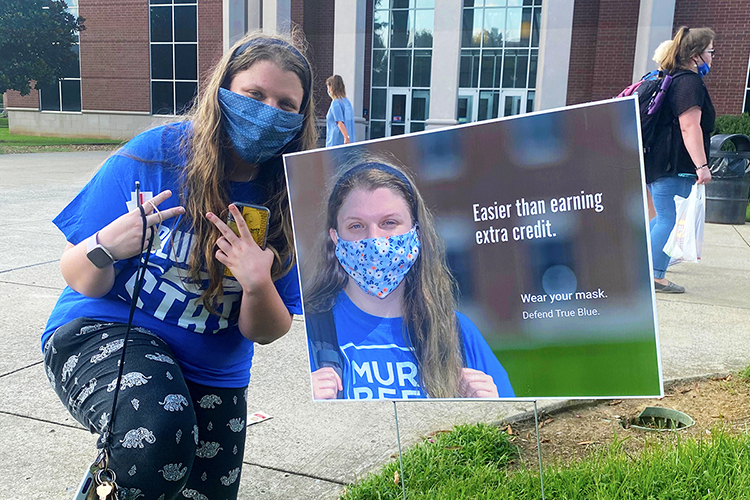 MTSU senior visual communication majors Sydney Clendening of Nashville poses next to a “Defend True Blue” promotional campaign sign featuring her photo outside the university’s Business and Aerospace Building. Clendening was part of the MTSU School of Journalism and Strategic Media student team who created a public relations and advertising campaign to encourage their fellow students to wear their masks on campus. The campaign slogan, “Wear Your Mask. Defend True Blue,” is included on each image. (MTSU photo by Leslie Haines)

Haines added there was an exact moment during the presentation that she knew the idea for the campaign was a success.

“I actually captured a screenshot of him laughing and that’s when I knew,” Haines recalled. “He hadn’t said anything yet, but when Dr. McPhee started praising not only the concept but the professionalism and the presentation being, ‘as good as anything I’ve seen on Fifth Avenue,’ and all the other executive board members were chiming in. The students’ smiles could not have gotten bigger.”

When school began in the fall of 2020, the “Defend True Blue” campaign was evident all over campus – from yard signs to bulletin boards to social media to signage at bus stops – it was on full display.

“To see their campaign come to life was a big payoff for them at the end of it. These students are smart, they grew up on media, and they’re savvy. (MTSU) administration really empowered the students,” Taylor said.