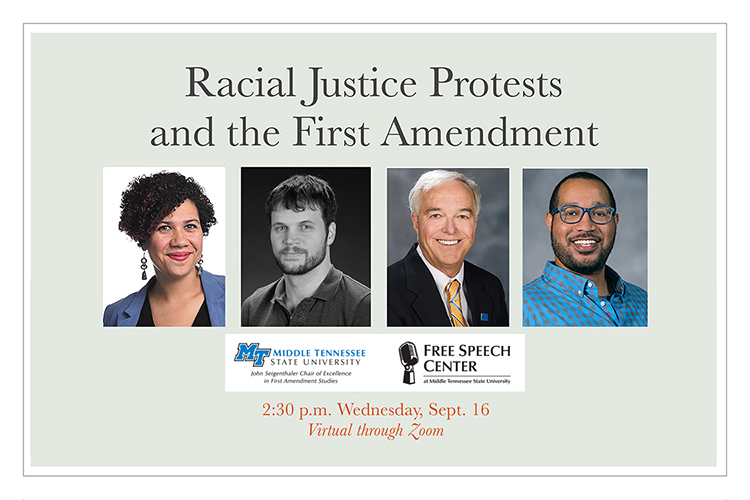 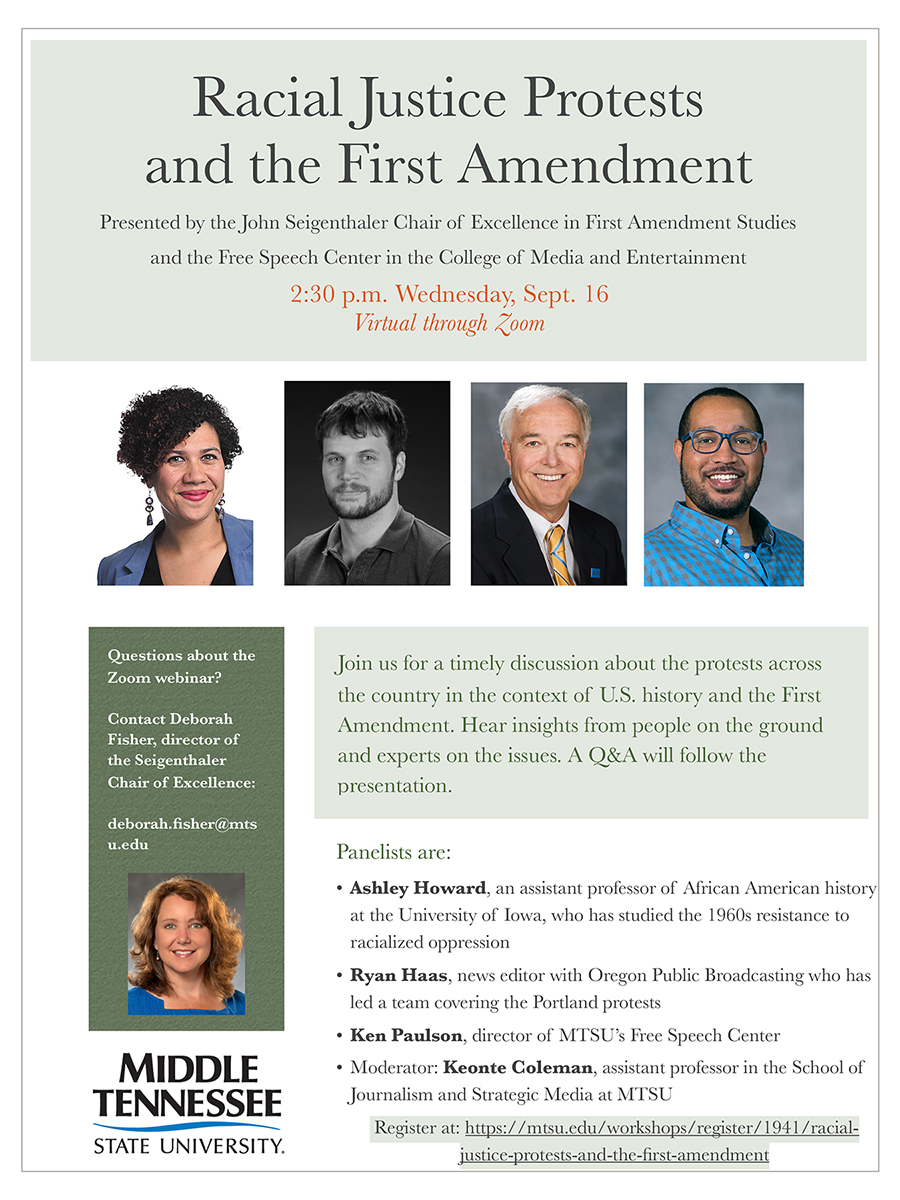 “Racial Justice Protests and the First Amendment,” presented by the university’s John Seigenthaler Chair of Excellence in First Amendment Studies and by the Free Speech Center at MTSU, is set to begin at 2:30 p.m. CDT Sept. 16.

Dr. Keonte Coleman, an assistant professor in MTSU’s School of Journalism and Strategic Media, will moderate the panel discussion, which will include:

• Dr. Ashley Howard, a professor in the University of Iowa’s African American Studies Program, whose research specialties include African Americans in the Midwest; how race, class and gender intersect; and the global history of racial violence.

• Ryan Haas, an editor and producer for Oregon Public Broadcasting whose team of investigative journalists broke the story that federal agents were deployed in Portland, Oregon, to tamp down the city’s Black Lives Matter protests.

• Ken Paulson, director of the Free Speech Center and a professor in MTSU’s College of Media and Entertainment, who’s also an attorney specializing in First Amendment issues and a former USA Today editor-in-chief.

Registration for the free Zoom discussion is available here and will include reminders before the event. Participants can also join the webinar on Sept. 16 with this direct link.

The panelists also will answer questions after the discussion.

Howard’s scholarly work and commentaries have been featured on Real News Network and the No Jargon podcast as well as in the Chronicle of Higher Education and The Black Scholar.

Her planned book, “Prairie Fires: Class, Gender, and Regional Intersections in the 1960s Urban Rebellions,” focuses on how the Midwest responded to and participated in the racial-oppression protests that galvanized 1960s America.

Haas, a former newspaper reporter and editor who joined Oregon Public Broadcasting in 2013, also handles content partnerships for the organization.

He’s won national acclaim for his reporting, including two National Magazine Award nominations for his work with the “Bundyville” podcast, which investigates extremist violence stemming from the antigovernment movement in America.

Paulson is the former dean of the College of Media and Entertainment, which houses the Seigenthaler Chair of Excellence and the Free Speech Center. He also is a columnist for USA Today, focusing on media and First Amendment issues.

Moderator Coleman is an award-winning former TV journalist and producer who began teaching in 2010 and joined MTSU’s journalism faculty in 2018. His teaching and research interests include broadcast journalism, news producing, newsroom leadership and diversity in both media and higher education leadership.

The Seigenthaler Chair supports a variety of activities related to contemporary journalism, including visits from distinguished professors and lecturers, research, seminars, and hands-on training for student journalists.

You can learn more about MTSU’s John Seigenthaler Chair of Excellence in First Amendment Studies at www.mtsu.edu/seigenthaler.

Its resources include the First Amendment Encyclopedia, the world’s single most comprehensive free reference work on the first five freedoms guaranteed by the U.S. Constitution’s Bill of Rights.

All Free Speech Center resources are open to the public anytime at http://freespeech.center.

For more information on MTSU’s College of Media and Entertainment and its programs, visit www.mtsu.edu/media.