Even during pandemic, history ..

Middle Tennessee State University renewed its nationally acclaimed efforts to retain and graduate its students on Wednesday, Oct. 21, unveiling an ambitious set of new goals and initiatives for the university over the next five years.

They made the announcement during a live broadcast on MTSU’s True Blue TV and its social media platforms.

“We celebrate the next steps in strengthening our commitment to a deeper, broader and more equitable academic and student life experience that extends learning well beyond graduation,” McPhee said.

“This launch underscores the university’s success in fulfilling its mission to serve all students and, by extension, its success serves our great state and its citizens who are blessed to live and work in Tennessee.” 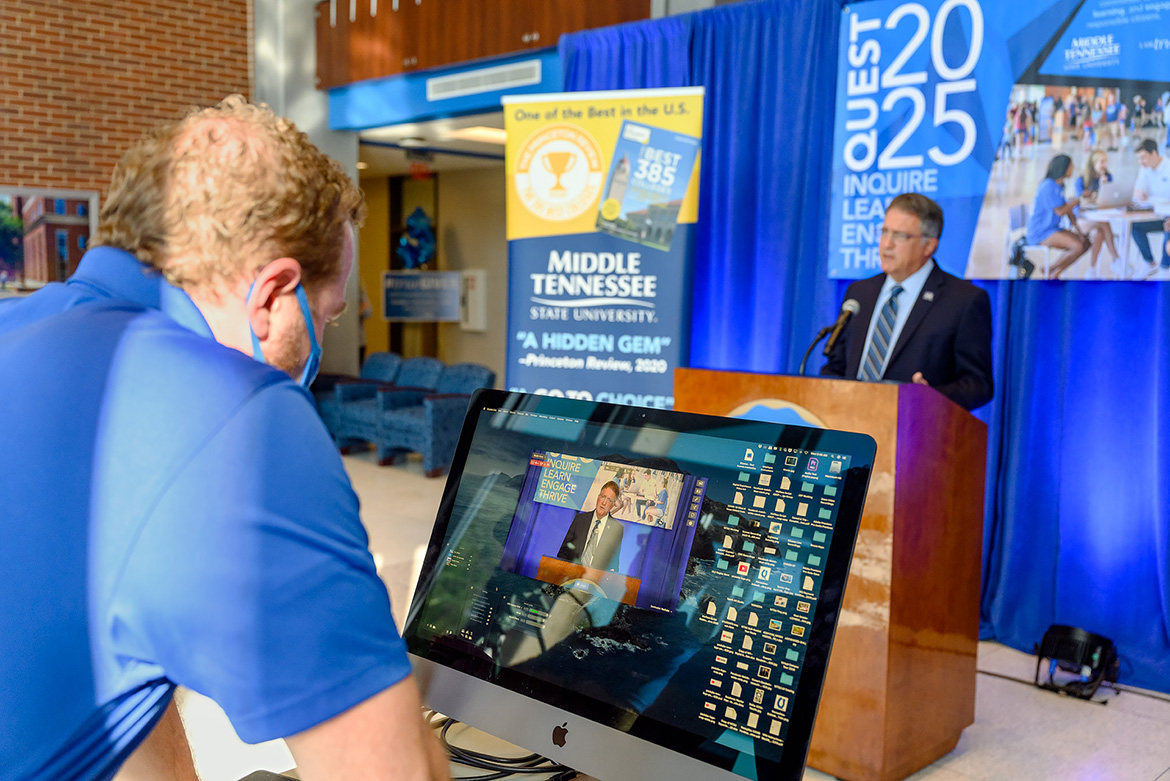 MTSU Provost Mark Byrnes discusses the goals of the Quest 2025 initiative announced via livestream Wednesday, Oct. 21, from the Cope Administration Building lobby as John Goodwin, left, from the Division of Marketing and Communications monitors the livestream feed. (MTSU photo by J. Intintoli)

Byrnes listed five strategic priorities for Quest 2025: develop a comprehensive faculty development program to integrate high-impact practices in key areas of curricula; eliminate achievement gaps and increase the diversity of faculty and staff; increase online, hybrid and off-site offerings, adaptive scheduling and curricular flexibility; support a culture of service through all divisions of the university; and create more living-learning opportunities on campus.

Among the additional goals spelled out in the plan, MTSU intends to: 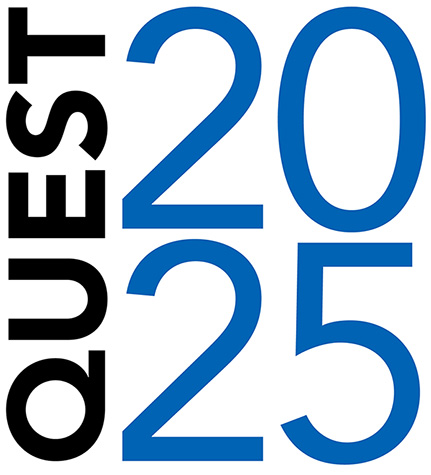 • Modify graduate degrees to meet market demand, including content and delivery of the degree programs that will ensure access, equity and quality.

• Revise the summer schedule to make financial aid more accessible to students who wish to pursue coursework in summer.

Some of the more ambitious suggestions contained in Quest 2025 include developing more residential living-learning spaces on campus; working to raise graduate enrollment from its current 13% to 20% of MTSU’s student body; extending business and corporate partnerships throughout Metro Nashville; and working with local governments to create an“educational, cultural and commercial district” near the Murfreesboro campus.

Byrnes said committees will “map out the paths for the university to reach these critical goals.”

“The plan for implementing Quest 2025 is ambitious to be sure,” he said. “That is because Quest 2025 intersects with our Academic Master Plan, the ‘Reach to Distinction’ and our Campus Master Plan (for facilities).”

McPhee and Byrnes were joined by Associate Vice Provost Vincent Windrow, who will oversee the plan’s rollout, and MTSU junior Will Rosser, who spoke of how the student success efforts have helped him persist despite the global COVID-19 pandemic.

“This is an incredibly important initiative in the life of our institution,” Windrow said, “and it again will help shape the student experience, the faculty experience and the staff experience for times moving forward.” 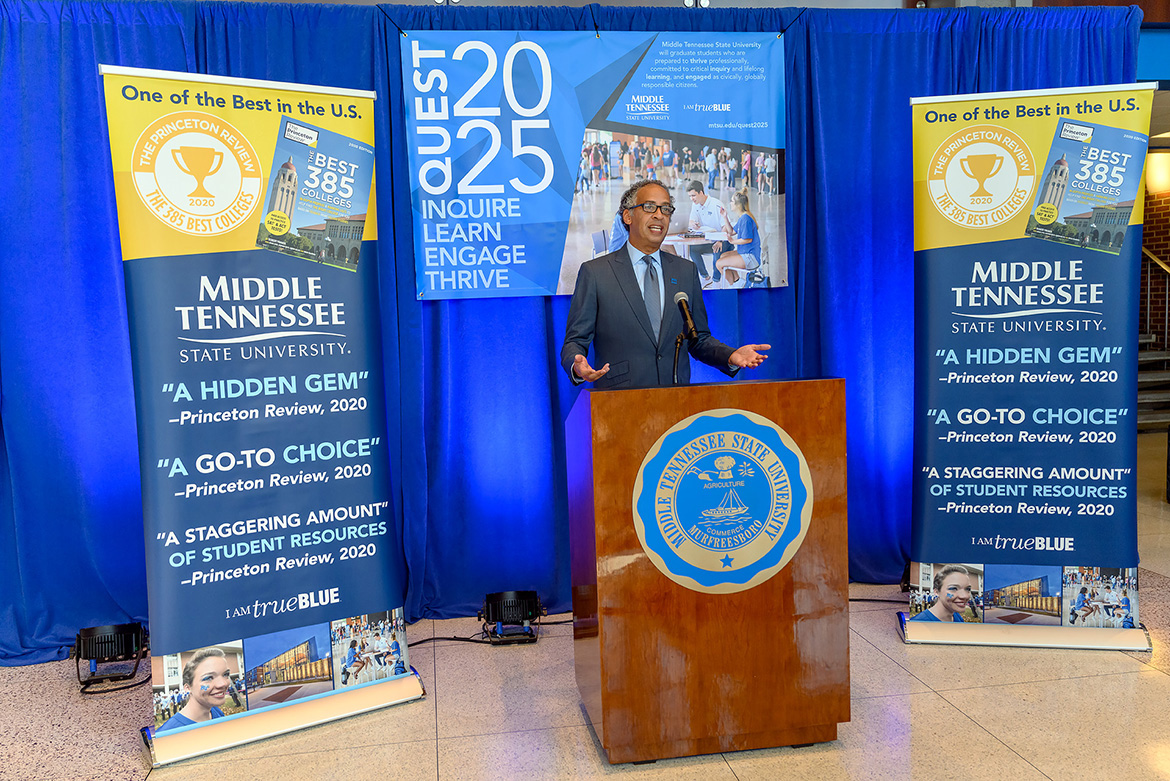 Rosser, a marketing major from Memphis, Tennessee, and an Office of Student Success peer mentor to incoming freshmen, said that he’s extremely excited about the Quest 2025 launch and being able to represent the student body at the event.

“Why am I excited? Because I should be,” he said. “I am excited MTSU is paying attention to me, to faculty, to staff and to the campus. I’m excited that MTSU understands my success is its success.

“I’m excited that thousands of students will reap the benefits of all the effort that will go into implementing the Quest. I’m excited that even during a pandemic, MTSU has decided to move forward on this project. That’s what leadership is all about.”

In thanking McPhee for “his support and leading MTSU in the right direction,” Rosser said this fall has presented “a tough and different kind of semester. The pressure, stress, load and work are real. But I know we’ll make it through this and whatever else comes our way. My generation is strong. We have a unique ability to adapt to most situations. We’ll be just fine.”

Quest 2025 extends efforts that began with the original Quest in 2013, which led to the establishment of the Office of Student Success in Peck Hall and incorporated a more robust use of analytics to better identify at-risk students early in their academic careers and develop more effective strategies to keep them on track.

Since the launch of the first Quest, MTSU’s seen these changes:

• And the university has graduated just under 30,000 students. 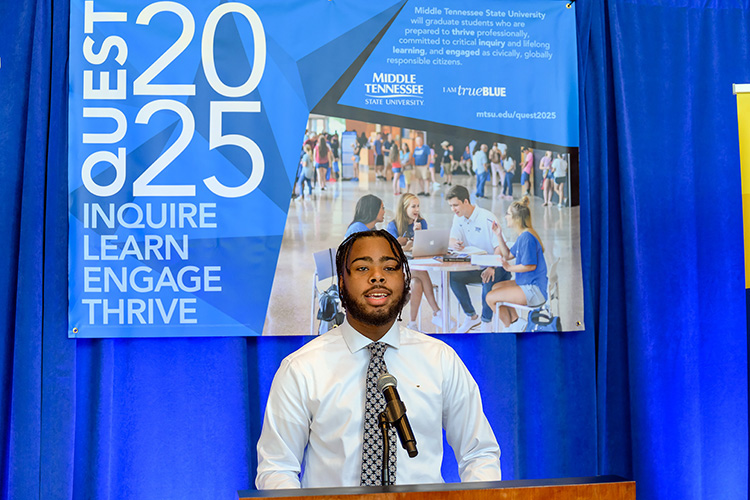 MTSU junior Will Rosser, a marketing major from Memphis, Tenn., and an Office of Student Success peer mentor to incoming freshmen, expresses his excitement about the Quest 2025 initiative announced via livestream Wednesday, Oct. 21, from the Cope Administration Building lobby. (MTSU photo by J. Intintoli)

Through Quest 2025, McPhee said “we will increase our efforts to engage students in the learning process, we will create distinctive and effective student experiences that enable students to build self-confidence and we vow to prepare students to succeed in both their careers and as involved civically and globally minded citizens.”

McPhee mentioned the early, formidable challenges set by the state of Tennessee: The Complete College Tennessee Act of 2010, the Drive to 55 Initiative to increase the number of Tennesseans with postsecondary degrees to 55%, and the Tennessee Promise, which provided two years of free tuition at any of the state’s community and technical colleges.

“MTSU has never been one to back away from a challenge,” he said. “We added to the state’s expectations our own aspirations and goals for enhancing student success. …

“we created a comprehensive, multi-layered approach to support MTSU students to stay the course and achieve their educational goals. In so doing, we became a national model for student success.” 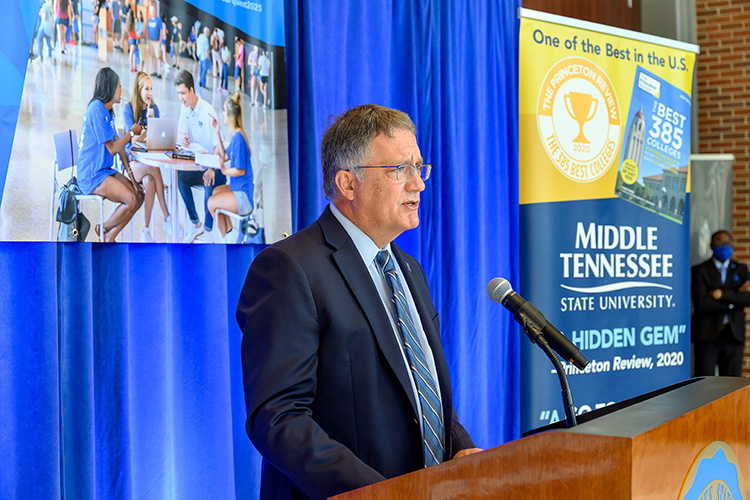 MTSU Provost Mark Byrnes discusses the goals of the Quest 2025 initiative announced via livestream Wednesday, Oct. 21, from the lobby of the Cope Administration Building. (MTSU photo by J. Intintoli) 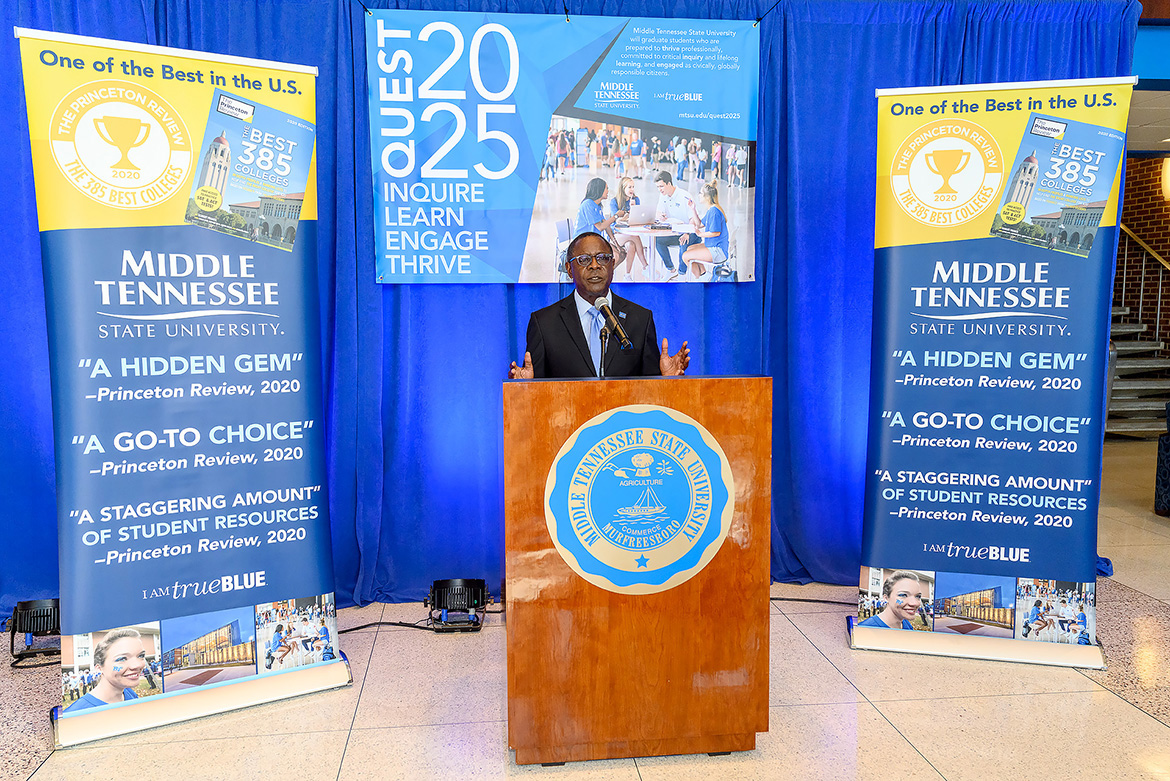 MTSU President Sidney A. McPhee discusses the goals of the Quest 2025 initiative announced via livestream Wednesday, Oct. 21, from the lobby of the Cope Administration Building. (MTSU photo by J. Intintoli)