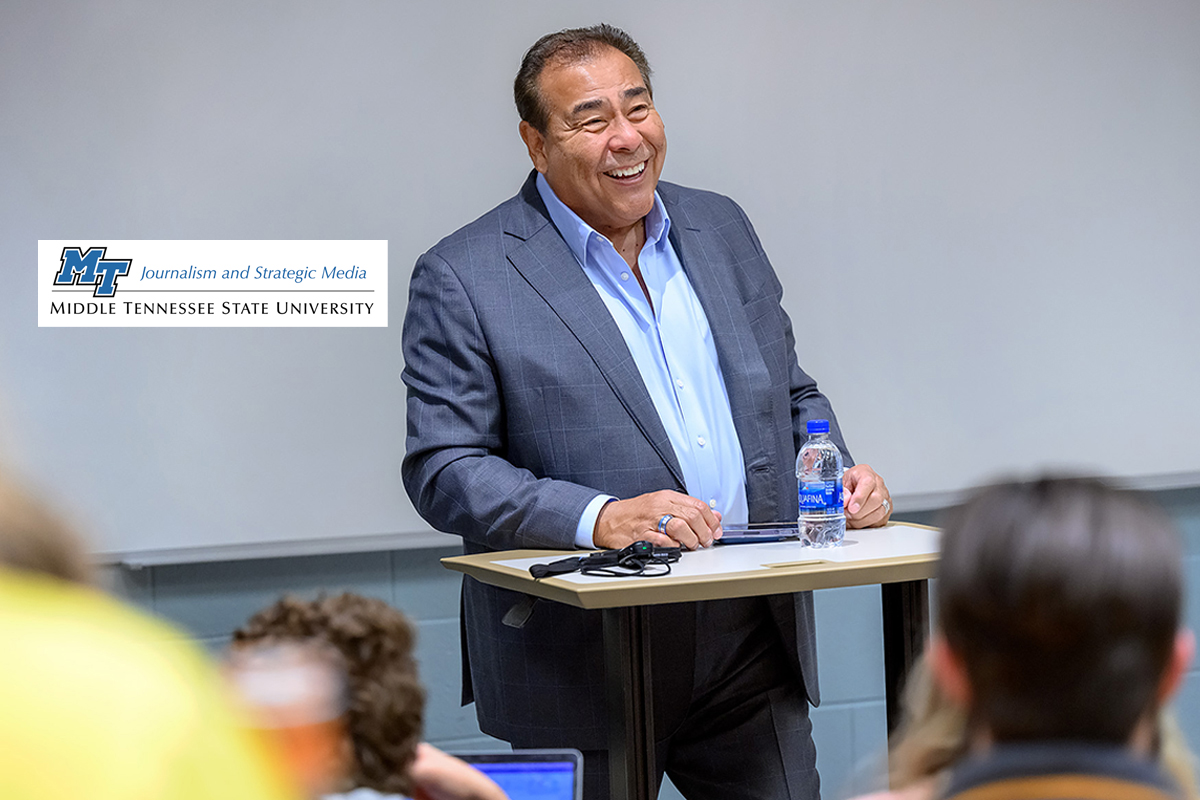 What would you do if Emmy- and Peabody Award-winning ABC News co-anchor, host and correspondent John Quiñones was your professor for an hour?

A group of students in MTSU’s School of Journalism and Strategic Media jumped at the learning opportunity Oct. 19, peppering the host of ABC’s “What Would You Do?” hidden-camera TV series with questions about his journey from a migrant farm-working family to his 30-plus years at ABC and his work to ensure fairness and accuracy in reporting.

“Tell the truth. Make sure that the stories you write aren’t your opinion, that they’re not commentary, that you’re not letting that seep into the story,” Quiñones said, “because I think what kills us as reporters is when we lose our credibility.

“If people believe you as a reporter telling the truth, you’ll have a better shot at educating them and bringing the news to them.”

Quiñones, a San Antonio native, has earned his credibility by reporting on stories that he understands intimately. He spoke only Spanish until he started first grade, but his parents’ insistence on the value of education helped him overcome the language barrier and thrive. When his father lost his job, then-13-year-old Quiñones and his family hit the road, traveling to Michigan and Ohio with other migrant workers to pick cherries and tomatoes.

After thwarting his teachers’ unfairly low expectations, working with the Upward Bound program and earning a bachelor’s degree in speech communication from St. Mary’s University and later a master’s degree from Columbia University School of Journalism, Quiñones, who’d started his career at a Houston radio station, began working in TV in Chicago.

For one assignment, he went back home to Texas to tell the story of immigrants risking their lives to work in the United States. Hidden cameras recorded him literally swimming across the Rio Grande, then finding jobs where he and his co-workers were mistreated and abused.

He won the first of his seven Emmy Awards for the story.

“We exposed the wrongdoing,” Quiñones told the MTSU students. “The owner of the restaurant where I worked had seven Mexican workers working for him as dishwashers and cooks, and he had not paid them in 17 weeks. And every time they complained, he would say, ’Hey, guys, you get to sleep. You’re in the basement. You get to eat all the food you want. You keep complaining. I’ll call immigration and have you deported.’ And that still happens in this country.”

Quiñones’ Emmy-winning work played a role in landing his first ABC job covering Central America in 1982, as did his ability to speak Spanish, after networks realized, following the murder of an American correspondent by Nicaraguan soldiers, that reporters should speak the language of the country they were covering.

His continuing success led to the co-anchor desk on ABC’s “Primetime,” reporting for “20/20,” “ABC World News Tonight,” “Nightline” and “Good Morning America,” and what became a 16-year role as host of “What Would You Do?” He won a 1999 George Foster Peabody Award as part of the ABC News team that created “ABC 2000,” the 23-hours-plus coverage of the new millennium celebrations worldwide.

Even with the hidden cameras and public settings of “What Would You Do?”, where actors play scenes of conflict and illegal behavior and unaware passers-by become involved, Quiñones works to ensure people are presented fairly.

“We want their permission to include them. If someone says something racist or ugly, … we don’t want to be that show that causes you to lose your job because we caught you on hidden camera at a bar and maybe you had a few drinks and you said something and I’m going to put it on my show because it was great reaction,” he said.

Quiñones, who was the keynote speaker for the Tennessee Board of Regents “We All Rise” Biennial Conference on Equity and Completion just before his MTSU visit, wanted to talk with journalism students while he was nearby.

The TBR contacted MTSU’s College of Media and Entertainment, which made the arrangements with the journalism school for Quiñones’ talk.

“It was a wonderful opportunity for our students and faculty to hear from John Quiñones,” said Greg Pitts, director of the School of Journalism.

“He reminded them of the positive impact that comes from community journalism and that there remains an important opportunity for students to become contributors to their communities as journalists.”

To learn more about the School of Journalism and Strategic Media at MTSU, visit www.mtsu.edu/journalism. More information about the College of Media and Entertainment and its programs is available at www.mtsu.edu/media.