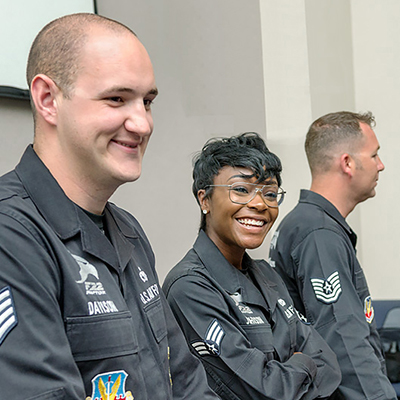 After listening and watching the U.S. Air Force F-22 Raptor demonstration team discuss their careers and the power of the stealth aircraft, MTSU senior Mohammed Alzahrani called it “just impressive.”

With about 100 people in attendance, including nearly 45 members of area Tennessee Wing Civil Air Patrol composite squadrons for teenagers, Raptor team members left quite an impression on adults and young people alike.

The Raptors, who spoke in the Business and Aerospace Building’s State Farm Lecture Hall, are in Rutherford County for the 2016 Great Tennessee Airshow Saturday and Sunday, June 4-5, at Smyrna Airport.

The U.S. Navy Blue Angels were to appear at MTSU, but the group canceled all airshow-related appearances after a June 2 crash that killed U.S. Marine pilot Capt. Jeff Kuss, a Durango, Colorado, native.

U.S. Air Force Staff Sgt. Steven Davison, left, and senior airman/weapons specialist Kyara Johnson smile as they listen to a guest discuss their visit to MTSU June 3. Davison and Johnson are part of a 13-member F-22 Raptor team in the area for the Great Tennessee Airshow June 4-5 at Smyrna. (MTSU photos by J. Intintoli)

Before the Raptor presentation, a moment of silence was held to honor Kuss “for his service to our nation,” said Andrew Oppmann, MTSU vice president of marketing and communications.

Raptor demo teams are known for performing precision aerial maneuvers to demonstrate the unique capabilities of the F-22, which is the world’s only operational fifth-generation fighter aircraft capable at flying at great speeds and altitudes.

The presenters showed video of Dan Dickinson, the scheduled Smyrna airshow demonstration pilot, who was unable to attend because of air show commitments. Dickinson said he has a “special spot in his heart for ROTC cadets. I encourage you to press forward. … It’s an awesome path and opportunity.”

MTSU offers military science in the College of Basic and Applied Sciences and annually produces an outstanding group of ROTC cadets.

Alzahrani, 24, an aerospace professional pilot major from Jeddah, Saudi Arabia, said attending the presentation “has been a great experience … to know about their lives, what everyone’s duty is and learn about the air show this weekend.”

Cowan, who is a home-schooled student, is a member of the Civil Air Patrol Smyrna Composite Squadron and an aspiring pilot. Cowan won’t be able to attend the air show because of an encampment activity.

“I’m definitely interested in flying, so being here has helped me learn more about it,” Cowan said. “It was good to know their side of things and how much they enjoy it. It made me regret that I’m not going to make it to the air show.”

“We see him long before he knows we are there,” he said.

The team fielded questions from audience members. Billie, who said they enjoy “Heritage Flights,” which pair the F-22s with World War II-type aircraft, noted that he and his colleagues were amazed by several of the teenagers’ detailed questions.

MTSU is the presenting sponsor of the Raptor team’s appearance at the airshow. The Department of Aerospace will have an information booth and aircraft display set up at the Smyrna event.

Raptor air show demonstrations include the power loop, split and tail side as well as a high-speed pass and dedication pass. The maneuvers are based on those designed for combat operations, but performed at much lower altitudes than most pilots are certified to attain.

U.S. Air Force Tech. Sgt. Jonathan Billie explains about maneuverability and other aspects of the F-22 Raptor while speaking June 3 in the Business and Aerospace Building’s State Farm Lecture Hall.