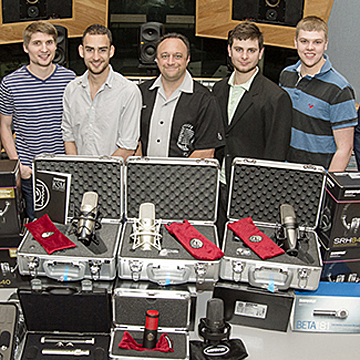 MTSU’s Studio A looked and sounded a bit like Christmas morning as a team of seniors from the Department of Recording Industry tore open boxes of grand-prize equipment from Shure Inc.’s national “Fantastic Scholastic Recording Competition.”

“Oooh, I wanted this! This is great!” said Sam Hillman of Frederick, Maryland, holding up one of the microphones included in a “microphone locker” of Shure equipment valued at more than $11,000 — the second top prize for MTSU in as many years.

He and team members Frank Gerdts of Alpharetta, Georgia, and Charlie Garcia of Roswell, Georgia, immediately began discussing potential locations for the equipment in one of MTSU’s world-class audio recording studios, known as “Studio A” and “Studio B.”

When teammate Jimmy Mansfield of Murfreesboro, Tennessee, arrived, they began recalling the flurry of texts and emails that followed the news that they’d won. “People were in class and yelling ‘OH YEAH!’” Gerdts joked.

Shure, based in Niles, Ill., is the leading manufacturer of microphones and audio electronics. The competition allowed student musicians to record in studios with the same gear used by professional musicians and engineers.

MTSU and nine other student teams from across the country and Canada competed with recording projects that required them to track and mix a performance using a Shure “microphone locker,” or collection of mics suitable for an array of different recording needs.

Each team submitted an unmastered stereo mix for review by a panel of industry professionals, who then evaluated the work for overall fidelity, clarity and sonic balance as well as selection and placement of microphones.

You can listen to the song at http://ow.ly/wxY5r.

Another group of MTSU recording industry students also took home the national grand prize in 2012. MTSU wasn’t eligible to compete in 2013 but returned determined to win this year’s competition, too.

“We’re really appreciative to Shure for this competition, because it’s a great motivator for our program,” said Dr. Doug Bielmeier, an assistant professor of recording industry and the project’s adviser.

“The best part of this is being nominated by our faculty, knowing that we’ve earned their respect,” explained Garcia, who’s set to graduate with classmate Hillman this Saturday, May 10, with a recording industry degree.

Bill Crabtree, an associate professor of recording industry at MTSU, said faculty selected these four, as well as the preceding group, “because their names just kept coming up. We’re familiar with them doing great work in class, so we knew they’d do a great job on this project.”

As the winning school, the MTSU recording industry department now gets to keep the “microphone locker” of Shure equipment. Each member of the winning team also will receive a Shure microphone package valued at almost $1,000.

“We’ve learned a lot on the Shure mics we received in the last contest,” Crabtree said. “It’s always great to update equipment to give our students a better experience. We still have some equipment here in this studio that was used over in Haynes House more than 25 years ago.”

Haynes House was a university-owned home on East Main Street that served as the department’s first recording studio in 1980. The Department of Recording Industry moved into its current headquarters — and studio space — in the Bragg Mass Communication Building when it opened in 1991.

The Lethbridge team was named runner-up in the 2014 competition, and the Central Missouri team received an honorable mention.

“This definitely helps to solidify the reputation that MTSU students are getting a very good education and putting it to good use,” said Ryan Smith, Shure’s regional manager for artist relations in Nashville, who presented the award to the team.

“Obviously, the education and training students are getting at MTSU was reflected in the results of this competition with outside judges. We like to give students opportunities to hear and use recording equipment they might not always hear.”

For more information about MTSU’s Department of Recording Industry, one of the largest and best equipped in the country, visit http://recordingindustry.mtsu.edu.