Grad student bones up on women..

Ah, Christmas … a time for family, friends, food and gift-giving. Gifts usually are wrapped in paper, and cardboard and plastic often are part of the original packing process.

Living rooms, dens and family rooms can become full of wrapping paper and other clutter that could be considered trash but actually should be recycled.

Daniel Stonebrook, left, and Tyler Carter prepare to lift paper and place it in one of the MTSU Recycling Program bins on Greenland Drive next to the Tennessee Livestock Center. (Photos by MTSU News and Media Relations)

Rather than having it head for the Rutherford County Landfill in Walter Hill, consider recycling paper, newspaper, plastic, cardboard and aluminum at the MTSU community bins on Greenland Drive; any of the 13 county convenience centers; the Murfreesboro convenience center on West Main Street; or the recycling center on Haley Road.

“After Christmas, we would really like people to be conscientious of where they put their items,” said Linda Hardymon, manager of the MTSU Recycling Program, recommending that they recycle.

The Greenland Drive recycling area, which is adjacent to the Tennessee Livestock Center and near the Dean A. Hayes Track and Soccer Stadium, is open 24 hours a day, seven days a week. It is not a manned site, “so we depend on people to do it right,” Hardymon said.

“People are here at all hours,” said Hardymon, who also serves as assistant manager for the Center for Energy Efficiency. “We’re glad they come to recycle. We do a really good job with what we have to work with, and we’re appreciative of everybody who recycles.” 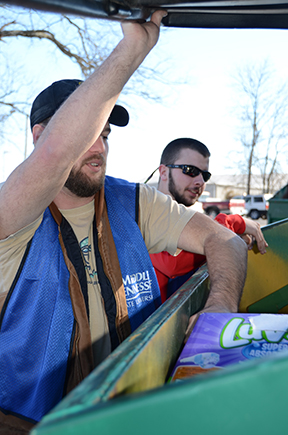 During the Christmas and New Year’s holidays and because both MTSU employees and the recycling companies’ pickup drivers also have time off, Hardymon asks the public to be considerate when leaving their items at the Greenland Drive location and to please take not of the posted guidelines.

“We would look for people to be somewhat more responsible, to sort their things and not leave their items on the grounds,” Hardymon said. “The recycling materials will be picked up while we are off.”

Responsibility would include breaking down cardboard, allowing for more to be placed in bins by others.

An online search for “plastics and number symbols” will provide more information about the Society of Plastics Industry identification coding system.

There’s also a metal cage unit for people to deposit their aluminum cans and products. MTSU does not recycle metal cans or glass; those items can be dropped off at the city and county sites.

Hardymon receives student support for the program year-round. In September, they began wearing MTSU recycling vests “for security and identification,” she said.

Carter, an animal science major who said he became a recycler after joining the program, said he wishes people, particularly students, would not toss trash into any recycling container.

“A lot of students throw trash, cans and food waste in bins, and we’ll have to sort through it in buildings,” Carter said.

If the bins are too contaminated, it just becomes trash, Hardymon added.

Professor emeritus Dr. Pat Doyle began the recycling program in 1972 as part of a Biology Club initiative. Before retiring in 2002, he and the program received a national Daily Point of Light Award in 1999.

To learn more — including a brief history of how recycling began at MTSU, the program’s objectives and frequently asked questions and interesting facts — visit www.mtsu.edu/cee/RPO.php