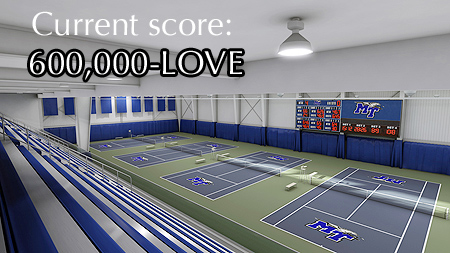 Blue Raider Director of Athletics Chris Massaro has announced the official start of a campaign to provide an indoor tennis facility for MTSU to be built in the Murfreesboro area.

The project, part of the university’s $80 million Centennial Campaign announced April 13, is already under way, thanks to a jump-start from the family of the late Carolyn Boatwright Reeves (MTSU ’63, ’72, ’91), an alumna and avid tennis player.

The family asked that friends and loved ones honor her by making donations toward building the MTSU Indoor Tennis Center, and, knowing how much she loved tennis and the university, Reeves’s friends did as her family requested.

Her children, Shane (B.S. ’91) and Marsha, have already made a donation to the fund, and the family also has committed to another gift that will be made at a later date.

“Rutherford County has needed a first-class indoor tennis facility for a long time,” said Shane Reeves. “My sister, Marsha, and I both know that Mom would be thrilled that she is playing a big part in getting this project started.”

The university, working with the Blue Raider Athletic Association, is engaging supporters to fund a six-court facility for the Middle Tennessee men’s and women’s tennis teams and for public use, too. Discussions have been ongoing with the City of Murfreesboro concerning land as well as the possibility of creating an on-campus venue.

President Sidney A. McPhee said the university has collaborated successfully with the city in past projects, including enhancements and faciliites that helped secure TSSAA prep sports tournaments and lure tourist dollars.

“One of the four priorities of our Centennial Campaign is to raise money to help us complete at the highest level of athletics,” McPhee said. “I am hopeful that this effort by athletics, as part of our overall campaign effort, will garner strong support from donors and partners.”

“The city of Auburn, Ala., and Auburn University have such a partnership, and it is a win-win situation for everyone,” Massaro added. “Our teams presently practice and play indoor tennis in Davidson County, so this facility will provide a tremendous local venue.”

An architect’s rendering of an idea for the planned Middle Tennessee State Tennis Complex is shown in exterior detail, above, and interior detail, right.

“I’ve been dreaming about what it would be like to have indoor tennis courts locally, and the impact it would have on our tennis program at Middle Tennessee and in Murfreesboro would be enormous,” said Borendame.

“As far as recruiting is concerned, it would put us in the ball game for every top-tier recruit. We’d no longer have to answer questions about where we play indoor tennis or what do we do when it rains. That will make a huge difference.”

The proposed facility, which Middle Tennessee would build, would be nearly 47,000 square feet and include six courts, locker rooms for men and women, a lobby, a viewing area for spectators, a laundry room and an electronic scoreboard.

There are numerous naming opportunities available, such as the courts, locker room, grandstand, lobby, plaza and even the facility itself.

Such a facility would allow Murfreesboro and Rutherford County to host Intercollegiate Tennis Association and TSSAA tournaments as well as other events that would provide new tax revenue to the city and county.

Associate Athletic Director Alan Farley, who grew up with Shane Reeves, knew Carolyn Reeves for years and called her a “special person who loved her family and tennis.”

“She would be proud to know that so many people gave money in her name to promote the sport of tennis. She has kick-started this project because her family and friends have stepped forward to make substantial gifts to the campaign,” Farley said.

“We currently have $600,000 on hand, plus some pledges that will be paid out over the next few years. Our goal is to raise as much money as we can up front, then secure pledge commitments for the rest.”

Anyone wishing to contribute to the Middle Tennessee Indoor Tennis Fund or learn more about it may contact Farley at 615-898-2210.