Sudanese ‘lost boy’ travels from anarchy to academia ‘On the Record’ 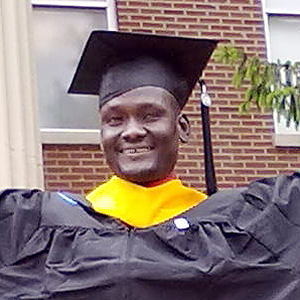 Johnson Reng celebrates on the steps of Kirksey Old Main after his May 2011 graduation from MTSU with a master’s degree. (photo submitted)

Johnson Reng, one of the “Lost Boys of Sudan” and an MTSU graduate, recently spoke about his inspiring life  on “MTSU On the Record” with host Gina Logue on WMOT-FM (89.5 and www.wmot.org).

You can listen to their conversation here.

Reng fled his native Sudan during the Second Sudanese Civil War and lived in refugee camps until he was able to obtain passage to the United States through nongovernmental humanitarian groups.

He earned his bachelor’s degree in neuroscience at the University of Texas at Dallas in 2008 and his master’s degree in professional science with a concentration in biostatistics from MTSU in 2011.

A former graduate teaching assistant at MTSU, he now works in the University’s Department of Mathematical Sciences as an instructor.

To listen to more archived “MTSU On the Record” programs, go to the “Audio Clips” box on the right side of mtsunews.com and click on “more” under the “On the Record” item.