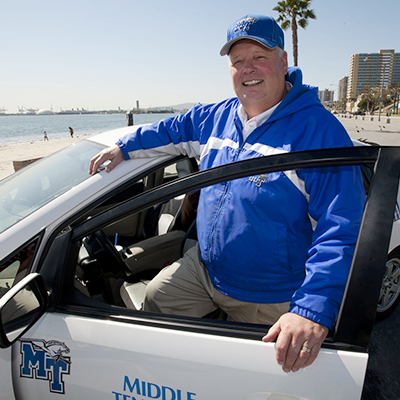 As an MTSU alternative fuels researcher, Dr. Cliff Ricketts believes he stands on the edge of history.

On Saturday, March 9, Ricketts will begin a five-day, 2,600-mile journey to drive coast-to-coast using no gas.

MTSU alternative fuels researcher Dr. Cliff Ricketts steps out of his Toyota Prius at the edge of the Pacific Ocean in Long Beach, Calif., on March 8, 2012at the end of a 2,600-mile journey. (File photo by David Bro for MTSU News and Media Relations)

How can he do it? After driving across the country in March 2012 using only 2.15 gallons of gas, Ricketts has the solution: His fuel sources for the 1994 Toyota Tercel and 2005 Toyota Prius will be hydrogen from water separated by solar power, all produced on the MTSU campus.

“We’re showing how America could be energy independent if the need arises,” Ricketts said. “We don’t need any foreign oil. … What we achieved last year was less pollution and less dependent on foreign oil.

“Hydrogen can be made from natural gas,” he added. “Our hydrogen comes from water. With hydrogen, everything’s natural. The solar is all natural and it’s sustaining.”

Ricketts’ trip comes after gas prices rose significantly in February, passing $5 a gallon for regular in several states. As of March 7, AAA said the national average was $3.72 for a gallon of regular gas.

The journey — or “expedition,” as Ricketts refers to it — will begin March 9 on the beach at Tybee Island, Ga., near Savannah. It is scheduled to end Thursday, March 14, on the shores of the Pacific Ocean in Long Beach, Calif., a state where gas is more than $5 a gallon.

If all systems are working properly with the two primary vehicles, Ricketts said he plans to refuel them overnight. The group is carrying hydrogen, because it is not available everywhere.

MTSU senior Arad Alexander of Houston, Texas, will be part of the travel team. He was in Ricketts’ alternative fuels class last fall, and his group’s class project involved turning a donated golf cart into a solar electric vehicle.

In addition to Young and Alexander, crew members include Travis Owen of Woodbury, Mike Sims of Jackson, Mich., and the professor’s youngest son, Paul Ricketts of Versailles, Ky.

Owen, who attended MTSU, is a student at the Tennessee Technology Center at Murfreesboro. Several of Ricketts’ former students, who were involved with his years of research, also plan to participate.

In 2012, Ricketts and Young combined to drive 1,700 miles using 95 percent ethanol, or 43 gallons of E95, and 5 percent gas. The remaining 900 miles was driven using hydrogen from water separated by solar power, all produced at MTSU.

On Nov. 1, 2010, Ricketts drove the Tercel, nicknamed “Forces of Nature,” approximately 500 miles from Bristol, Va., to West Memphis, Ark., fueled by solar and hydrogen from water, all produced on campus.

Ricketts, a native of Mt. Juliet, Tenn., has spent 37 years in higher education, including 35 in alternative fuels research. He teaches a variety of agriculture classes for the MTSU School of Agribusiness and Agriscience in the College of Basic and Applied Sciences.

In 2006, Ricketts was asked to testify before the 109thU.S. Congress’ Committee on Science and Energy regarding multi-fuel plug-in hybrids.