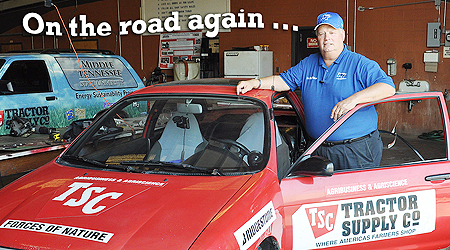 Long Beach, Calif.—MTSU Agribusiness Professor Cliff Ricketts is confident that his experience growing up on a dairy farm is at the core of the University’s recent achievement in alternative-fuels research: a 2,582-mile trek from coast to coast.

Ricketts put his theory to work in the days leading up to his research team’s planned departure from Tybee Island, Ga., on March 4. Badly needed parts did not arrive in time to let his small crew of students and volunteers make some final preparations.

But, leading by example, Ricketts dipped his toes in the Atlantic Ocean on schedule, resorted to “backup plans two and three,” and left with three vehicles, instead of just one, to make the trip.

MTSU Professor Cliff Ricketts walks into the Pacific Ocean on March 8 to end a spring-break cross-country journey the same way he and his alternative-fuels research team started it at the Atlantic Ocean on March 4. (MTSU photo by David Bro)

Even when a wheel bearing on a chase truck went out early on, the group transitioned to their remaining van and continued on, averaging around 60 mph over the course of the journey that finished in Long Beach, Calif., the afternoon of March 8.

The effort, spread across the three research vehicles, used solar power through energy credits supplied by solar panels arrayed on the roof of the University, which put power back in the grid of the Tennessee Valley Authority. That allowed the team to simply charge the 2007 Prius’s two large banks of batteries overnight, using a standard residential electrical outlet.

Ricketts said he used the University’s regular water supply from the Murfreesboro Water Department as the starting point for the alternative fuel. After electrolysis and filtering, the hydrogen provided power to the vehicle’s stock internal-combustion engine.

he original plan was to use tanks pulled by a trailer to recharge the hydrogen-fueled Prius. When those parts did not arrive, Ricketts and his team decided to use three cars instead of just one.

In addition to the solar electric batteries and the hydrogen plant, the Prius also was outfitted to use an ethanol/gas mix, which accounted for about 90 total miles of the trip’s progress or about 2.15 gallons of fuel, according to Ricketts.

The group had estimated a total use of 10 gallons of gas, but road conditions allowed for much lower consumption. Technically, the ethanol/gas mix is not considered back-up power but is used when road conditions, like steep hills or heavy winds, would quickly deplete the batteries and hydrogen gas.

Ricketts said he hopes that the 50 or so students in MTSU’s agribusiness program and the half-dozen students that help out with alternative-fuel research each semester will pick up a concept that he calls fundamental to achieving any goal: never give up.

Ricketts was the only one to put his toes in the Atlantic before the trip began. The entire crew, students and volunteers, joined him in the shallow waters at the Pacific Ocean’s edge in Long Beach at the journey’s end.