They did it! MTSU student relishes role in ‘Southe...

They did it! MTSU student relishes role in ‘Southern Fried Fuel’ trip (+VIDEO) 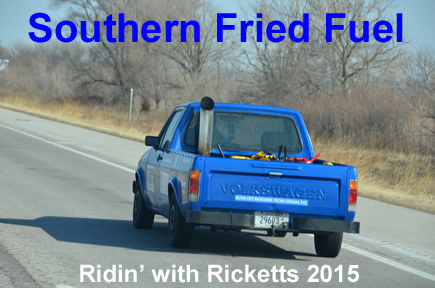 In what he calls the trip of a lifetime, Black, 21, said driving across the country was an awesome experience and it included driving a 100-mile portion after midnight March 9.

Ricketts’ research and objective was to show the fuels would be an alternative in the event foreign oil becomes scarce.

“The experience has been amazing,” said Black, who lives in Lascassas, Tennessee, will graduate in May and is already admitted to Belmont Law School in Nashville.

“It has really shown me that running a vehicle on animal fat is possible. I was a little skeptical at first, but now I know that it can be done.

“Don’t get me wrong. It has been a lot of hard work — long nights, breakdowns and setbacks, but it has been worth it to show people that this is a viable fuel and way of powering a vehicle,” he added.

“I always like helping students discover their own country and the world,” he said. “There is more to college than books and studying. And Ben contributed to our success.”

It marks another career milestone for Ricketts, 66, who is in his 38th year as a member of the School of Agribusiness and Agriscience faculty.

Backup plans included buying a second vehicle, a 1991 Dodge Ram diesel, in case the primary vehicle, a 1981 Volkswagen Rabbit diesel, went out of commission, and buying parts to repair the Rabbit if needed.

The VW Rabbit experienced a mechanical issue March 9 and necessitated the need to use the Dodge Ram for the remainder of the trip.

Black, who is earning a minor in general agriculture, admits he knew little about operation of the Rabbit, but he helped when opportunities presented themselves.

“I’m still able to help with some mechanical things, handling tools, find parts at parts stores and I’ve been assigned to do all the navigating and ‘googling’ things while on the trip,” he said. “I think my contribution has been in helping the group stay on course and doing various other jobs.”

Joining Ricketts and Black on the trip were Terry Young of Woodbury, Tennessee; Mike Sims of Jackson, Michigan; and Ricketts’ son, Paul, who is from Versailles, Kentucky.

The expedition began Nov. 8, 2014, in Key West, Florida. It ended Nov. 11 near Kansas City, Missouri, when a transmission issue halted the trip. It resumed March 8 in Grain Valley, Missouri.

BUTTE, Mont. — As the 594 miles from Wall, South Dakota, to Butte, Montana, on the “Southern Fried Fuel” expedition rolled by, Middle Tennessee State University researcher Cliff Ricketts realized a decision he made months ago was a wise one.

After a suggestion by an MTSU agriculture student, he bought a 1991 Dodge Ram diesel pickup as the backup for the 1981 Volkswagen Rabbit diesel.

When the Rabbit continued to have water pump, radiator and overheating issues, Ricketts, in baseball terms, called on his ace reliever to earn the save of the day.

In reaching Billings, he drove 364 miles on one-half tank of biodiesel from chicken fat — and plenty left in the tank as the team moved forward in hopes of completing driving 3,500 miles from Key West, Florida, to Seattle, Washington, on the fuel, which has been perfect and had no part in the mechanical issues.

“It’s been great,” Ricketts said of the Dodge Ram coming through in the clutch. “We cashed in on the expectations of the backup vehicle. We’re getting excellent mileage — 20 miles per gallon or more.”

The group, which includes MTSU senior Ben Black of Lascassas, Tennessee, will attempt the final 600 miles to Seattle Tuesday, March 10. Other team members include Terry Young of Woodbury, Tennessee; Paul Ricketts of Versailles, Kentucky; and Mike Sims of Jackson, Michigan.

Knowing petroleum prices will rise again, Ricketts, an MTSU School of Agribusiness and Agriscience faculty member, wants his “research to show and test the viability of animal fat as a fuel, using it 100 percent and comparing it to the performance of biodiesel from vegetable oil.”

“More importantly, my research is to show and illustrate that there are other viable alternatives to petroleum oil from the agricultural industry,” he added. “This animal fat is another alternative fuel that could be used in time of a national emergency.”

The MTSU professor uses older vehicles to stay within his budget. His original ’81 Rabbit was destroyed in 2014 when a student working on the truck inadvertently blew the engine.

Butte temperatures dropped to 22 degrees by early morning March 10, causing concern for the team. They left the truck running overnight to keep the fuel from gelling.

For at least a nearly 100-mile stretch of Interstate 90 in Idaho, the team will use MTSU dining facilities’ used cooking oil.

The “Southern Fried Fuel” expedition will go through Spokane, Washington, then they will drive more than 250 miles to reach Seattle Tuesday to complete the 1,850-mile second leg of the trip.

Since March 8, they have driven through Missouri, Iowa and South Dakota.

WALL, South Dakota — The day began with renewed promise and bright sunshine. Later, frustations grew because overheating issues reminded some team members of the problems they experienced in November.

Aware that gas prices will rise again, the MTSU School of Agribusiness and Agriscience faculty member says pure biodiesel is a nontoxic, biodegradable, sulfur-free renewable fuel, and using it could have a major impact on U.S. petroleum consumption.

“We had a slow start with overheating issues with the truck again,” Ricketts said of the sluggish beginning of the trip from Kansas City, Missouri, to Wall, South Dakota, home to Wall Drug and the nearby Badlands National Park.

“The issues are pretty much resolved. We didn’t waste more than an hour total. So, overall, it was a good day. Very successful.”

Ricketts, who has spent 38 years at MTSU — researching alternative fuels most of that time — said the weather “thankfully, is working in our favor” with spring-like daytime temperatures reaching into the upper 50s and lower 60s.

The March 9 leg of the trip includes driving through a northeast portion of Wyoming on I-90 and on into Montana, eventually arriving in Missoula.

Ricketts and his team will cover 1,850 miles on the second leg, which is scheduled to end Tuesday, March 10, in Seattle, Washington.

The first segment of the expedition from Key West, Florida, to Seattle ended Nov. 11 in Grain Valley. A transmission issue postponed the trip for nearly four months.

MTSU senior Ben Black, 21, of Lascassas, Tennessee, prepares to add coolant to the radiator at a March 8 stopover in Council Bluffs, Iowa, on the first day of professor Cliff Ricketts’ “Southern Fried Fuel” expedition. Ricketts is trying to complete the final 1,850 miles of the journey using biodiesel from waste animal fat.

Middle Tennessee State University professor Cliff Ricketts is not accustomed to failure. It is not a part of his vocabulary.

MTSU professor Cliff Ricketts holds a plastic bottle containing pure biodiesel made from chicken fat that he will use as a fuel source to finish a roughly 3,550-mile, coast-to-coast trip from Key West, Florida, to Seattle, Washington, between March 8 and 10. (MTSU file photos by News and Media Relations)

So when the 38-year-veteran MTSU alternative fuels researcher had his 2014 “Southern Fried Fuel” expedition aborted by a transmission problem near Kansas City last November, he was extremely frustrated, but he also remained firmly optimistic.

“Attempting to drive from Key West to Seattle has been an adventure,” he said then of the journey, in which he intended to drive from the tip of the Florida Keys to near the Pacific coast in Washington. “We’ll postpone it to a later date.”

The “later date” for completing the 1,850-mile drive comes Sunday through Tuesday, March 8-10, during spring break for MTSU students and faculty members.

To fuel his journey, Ricketts is using biodiesel from waste chicken fat obtained from an Arkansas processing plant and used vegetable oil from MTSU dining facilities.

Aware that gas prices will rise again, the School of Agribusiness and Agriscience faculty member said he knows pure biodiesel is a nontoxic, biodegradable, sulfur-free, renewable fuel, and using it could have a major impact on U.S. petroleum consumption.

“My goal and passion is to keep the United States from using foreign oil. I’m optimistic we can finish the expedition and reach Seattle,” said Ricketts, who will be driving a 1981 Volkswagen Rabbit diesel using the two biodiesel fuels.

“We got the vehicle fixed. It’s better than it was before,” he continued. “Plus, we’ve got a backup vehicle in case we have any issues.”

MTSU professor Cliff Ricketts stands next to the 1981 Volkswagen Rabbit diesel pickup truck he is driving from Key West, Fla., to Seattle, Washington.

The professor said he and his team are “even more confident than the last time” and are “better prepared for any cold weather we might encounter,” thanks to heating systems they’ve added to keep the fuel warm.

With a five-member team — including MTSU senior Ben Black of Lascassas, Tennessee — accompanying him, Ricketts will resume the trip about 20 miles east of Kansas City.

The plan is to drive through Iowa, South Dakota, Wyoming, Montana, Idaho and across Washington before finishing March 10 in Seattle.