Models make it professional at.. 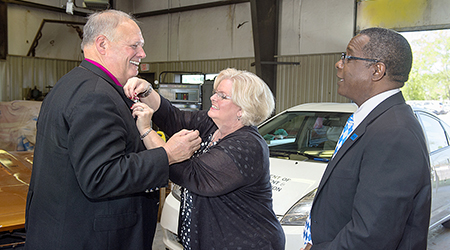 Dr. Cliff Ricketts’ five decades of alternative fuels research and exemplary classroom teaching have been acknowledged in a special way by MTSU President Sidney A. McPhee.

McPhee surprised the 37-year MTSU School of Agribusiness and Agriscience faculty member today when he presented Ricketts with the President’s Silver Column Award in a brief ceremony at the Vocational Agriculture Building on Lightning Way. You can watch a brief  video from the event below.

Ricketts becomes the sixth Silver Column Award honoree since the president established the award in 2004.

“We are what we are because of people like you,” McPhee said. “The President’s Column Award goes out to faculty, staff and employees who go truly beyond the call of duty, in bringing recognition to the university, or for unsung heroes.

“And I just consider you for years being one of our ‘unsung heroes.’ You just go about and do your job. You don’t expect the cameras. You don’t ask for anything other than a little support to keep your work going.

“I’ve watched you since I’ve been at this university do so much for our students, the relationship you have with our students, the ground-breaking research in an area so badly needed in our country with your fuel efficiency work and most recently, your travels around the country that have drawn attention to the university from all sources around the world.”

Ricketts said he felt “so honored to receive this award,” later adding, “we’re here for the students. We need to do all we can to help them.”

McPhee said that when selecting graduation speakers and President’s Silver Column Award recipients, he is a committee of one.

“This is very, very special in that not everyone gets to wear this,” he said, explaining that the pin’s silver column accented in blue symbolizes the enduring columns of Kirksey Old Main, one of MTSU’s four original campus buildings.

“This is for you, for quietly, behind the scenes, being an extraordinary person, an extraordinary professor and an incredible researcher in terms of the work that you’re doing that’s really going to change lives and be a major contribution, not only to the state, but the country.”

Dr. Cliff Ricketts, left, and his wife, Nancy, laugh as she affixes the President’s Silver Column Award pin to his lapel April 30. MTSU President Sidney A. McPhee, who presented the pin to the longtime educator and alternative fuels researcher, is at right. (MTSU photo by J. Intintoli)

Neely told McPhee that she “owes a lot — 80 percent — to Dr. Ricketts” for helping her adjust from student to instructor to coordinator of the dual-credit program in the department.

Ricketts and his support teams have made back-to-back, 2,600-mile trips. In March, the journey was made without gasoline, using hydrogen from water separated by the sun, all processed on campus. In 2012, they used only 2.15 gallons of gas to complete the trip.

MTSU professor Cliff Ricketts stands next to a sign showing gas prices at a Mobil gasoline station just off an I-40 west exit near Newberry Springs, Calif., on March 14 en route to Long Beach, Calif., and the end of a 2013 cross-country car trip without gasoline. (MTSU file photo)

A native of Mt. Juliet, Tenn., Ricketts earned degrees from the University of Tennessee-Knoxville and Ohio State University. He joined the MTSU faculty in August 1976.