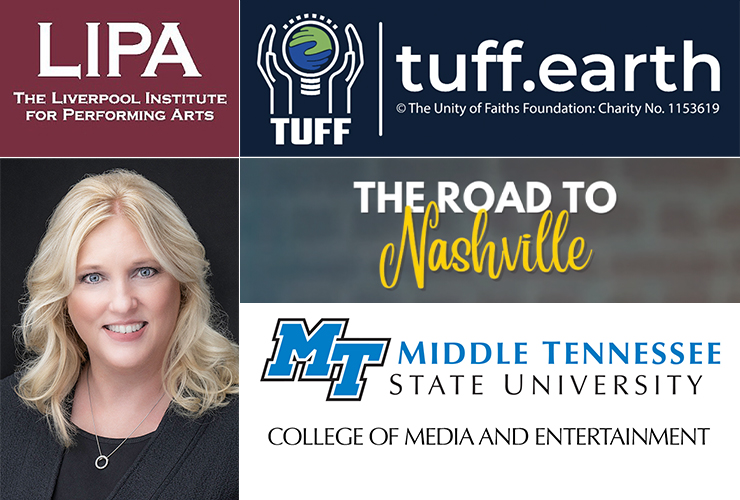 Middle Tennessee State University has joined the alliance of the Liverpool Institute for Performing Arts along with TUFF (The Unity of Faiths Foundation) Earth for the upcoming global music project promoting mental health titled The Road to Nashville – Liverpool International Song Contest 2022.

The project, which officially launched May 9, has attracted 14,411 artists to date who have submitted nearly 15,500 songs representing talent from 29 countries. Of those who have submitted a song, over 16% (approximately 2,300) have applied for the complimentary mental health services and counseling provided by professionals, according to a TUFF’s news release.

MTSU’s College of Media and Entertainment and LIPA support TUFF Earth to locate student musicians and songwriters in need of mental health services and make them aware of the opportunity The Road to Nashville presents. Submissions closed Aug. 31, and the top 10 finalists will perform live before judges in Nashville, Tennessee, at the renowned EXIT/IN on John Lennon‘s birthday Oct. 9.

Beverly Keel, dean of MTSU’s College of Music and Entertainment, said it was important for her that the university joined The Road to Nashville collaboration “because the internationally acclaimed program shares our values.”

“Of course, MTSU has one of the world’s best music business programs, so we embrace the contest that encourages songwriters to share their music with the world,” Keel said. “But it’s the mental health component that sets Road to Nashville apart from other competitions. We help students become whole, healthy and happy adults, no matter what their desired careers are, and mental health is certainly a vital component of that.

“I am proud that MTSU is affiliated with a program that puts mental health first and creates a sense of community.”

Located in the United Kingdom, LIPA is a world leading center of excellence for the training of those who make performance possible. An international community of performers, creatives, technicians, filmmakers and business people who learn by working together with industry partners on fully realized productions and projects. LIPA is world renowned as a leading provider of university level creative and performing arts training with a portfolio of ambitious and popular courses.

“As the ‘World Capital City of Pop’ it’s great to see Liverpool in a new song writing collaboration with the world Music City, Nashville,” said Martin Isherwood, head of music for LIPA. “These two great song cities are the home and source of some of the world’s best songwriters and songs. Together, they are leading the song writing world to inspire songwriters to use their skill and creativity to promote what the world needs now more than ever: human kindness.

“As well as using the power of music and songs to lift our spirits, The Road to Nashville Liverpool International song contest, also offers support to all songwriter entrants with mental health issues.”

Isherwood discusses the effort in this brief video: https://www.youtube.com/shorts/h-UVsBGrGok.

Alyssa Bonagura, recording artist, songwriter and graduate of LIPA, talked about the importance of music and the link to mental health.

“I spent three years, 2006 to 2009, attending the Liverpool Institute for the Performing Arts. When I was over there, I had never felt more at home by the Liverpool people,” Bonagura said. “You are combining two magical cities because music is at the heart of both of them. One of my biggest songs of my career was written in Liverpool called ‘I Make My Own Sunshine’. I was going through a tough time being far away from my family when I wrote that song. This is such an important cause.

About The Road to Nashville – Liverpool International Song Contest

The Road to Nashville 2022 was birthed from the 2020-21 Liverpool International Song Contest, aimed at tackling discrimination and stigma around mental illness specifically tailored towards those in the creative sector. Created by TUFF (The Unity of Faiths Foundation) and backed by both the Nashville Metro City Council and the Liverpool City Council, the 2022 Road to Nashville Contest started with the global #KIND20 campaign. During the pandemic, TUFF’s global #KIND20 campaign was a way to demonstrate and promote social integration and reached a staggering 6.7 million people worldwide. From here, the Road to Nashville – Liverpool International Song Contest expanded to address TUFF’s wider goals of empowering young people and promoting acceptance, equality and respect for other cultures.

About TUFF – the co-organizer

The Unity of Faiths Foundation, or TUFF, is a British secular charitable organization working in four continents. TUFF bridges community sectors, organizations and government by rebuilding social integration and global community cohesion. TUFF empowers youth through participation in sports, music and science, as well as teaching education in human values such individual liberty, gender equality and respect for other cultures. TUFF was established in 2011 and has the support and acknowledgments of many dignitaries including Pope Francis, the Queen of England, and former President Barack Obama to name a few. The ultimate goal is to share kindness and facilitate the integration and empowerment of those people who do not have a voice, due to numerous challenges and obstacles they face in their daily lives.