MTSU Theatre students are stepping off the traditional scripted stage Feb. 25-28 and moving into virtual rooms they’ve created for audiences — and themselves — for thought-provoking interactive discussions in the first spring 2021 production, “What’s My Role?”

Guided by Department of Theatre and Dance lecturer and director Jaclynn Jutting and associate director Candace-Omnira Lafayette, the 12-member ensemble of “What’s My Role?” will welcome audiences via Zoom beginning at 7:30 p.m. Central Thursday-Saturday, Feb. 25-27, and at 2 p.m. Sunday, Feb. 28.

There’s no charge for tickets, but audience members must reserve a “seat” for the live virtual productions here at the “MTSU Arts” ticketing site.

Each of the four “What’s My Role?” performances will be in a different “room” with a different focus on stories of Black, Indigenous and people of color. Each combines performance, design, dance, film and drama and invites audience participation with the ensemble.

The “devised work,” as it’s known in theater, relies on an ensemble collaborating on a common theme to create a performance for their production. “What’s My Role?” includes incorporating conversations and participation with their audiences.

“We’ve been creating and exploring bridges between talking, dreaming and change,” Jutting explains.

She adds that “What’s My Role?” originated from a departmentwide survey, asking what stories they needed to tell and, in the wake of a growing awareness of different peoples’ experiences, how those stories have brought and can bring social change.

“We’ve been working almost entirely remotely and weren’t all in the same room together, safely, until Feb. 9,” says Jutting, the former director of Belmont University’s Bachelor of Fine Arts-Directing Program who now directs and teaches in the Nashville and Chicago areas.

“We had students dreaming up interviews with Cicely Tyson, Ida B. Wells … and other historic figures and their impact one night, and the next, we’re literally filming it.”

The “What’s My Role?” ensemble includes:

When they’ve been working together in person, the cast and crew have continued to follow the department’s strict backstage and onstage guidelines for masking, distancing, sanitation and testing. The rules are adapted from multiple professional sources, Actors Equity, the U.S. Occupational Safety and Health Administration and the Centers for Disease Control and Prevention. 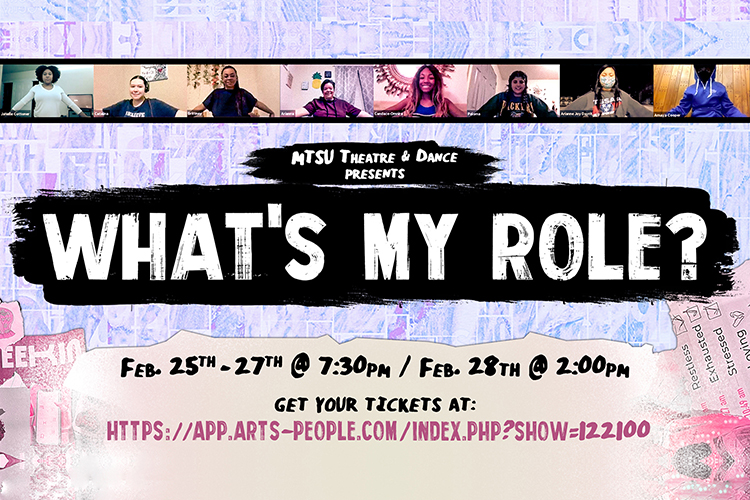 Click on the image to reserve free show tickets.

Their fall 2020 productions — “Romeo and Juliet,” “Failure: A Love Story” and “Ride the Cyclone” — had online audiences thanks to help from students in Department of Media Arts professor Bob Gordon’s advanced multi-camera TV production course in the College of Media and Entertainment.

This spring’s MTSU Theatre productions also include the “10 Minute Play Festival,” set March 25-28 online and in the Anderson Studio Theatre inside the Boutwell Dramatic Arts Auditorium, and the musical “Godspell” April 8-11 online and in Tucker Theatre.

For more details on the shows, visit www.mtsu.edu/theatreanddance/currentseason.php.