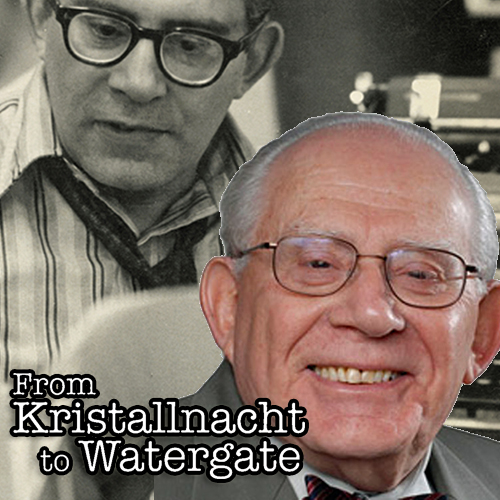 From the war-torn streets of Berlin to the monument-lined streets of Washington, D.C., Harry Rosenfeld has been an eyewitness to history.

The survivor of Nazi Germany and former managing editor of The Washington Post’s metro desk during the Watergate scandal will recall anecdotes from his fascinating life in “From Kristallnacht to Watergate,” a free public event, at 6:30 p.m. Wednesday, Oct. 8, in the State Farm Lecture Hall of MTSU’s Business and Aerospace Building.

Rosenfeld will discuss his memoirs with Gina Logue, producer for the university’s Office of News and Media Relations and host of WMOT-FM’s “MTSU On the Record.”

The son of a furrier, Rosenfeld was only 9 years old when his father was rousted out of bed in the middle of the night by Nazi officials and taken away on Oct. 28, 1938.

For three days, the family did not know whether Solomon Rosenfeld was dead or alive. Finally, the elder Rosenfeld called from Warsaw to say he and other Jews had been expelled to Poland, their country of origin.

Harry Rosenfeld also saw his family’s synagogue in Berlin destroyed on Nov. 9, 1938. This time of rampant coordinated destruction of Jewish stores, temples and homes became known as Kristallnacht, “The Night of Broken Glass.”

“We can read a thousand factual books about the Holocaust, but we can viscerally understand the horror of the Holocaust only by understanding the people who experienced it,” said Dr. Nancy Rupprecht, chair of the MTSU Holocaust Studies Committee and a history professor at the university.

In 1939, when Harry was 10 years old, the Rosenfeld family made it to America. His journalism career began in 1948 as a shipping clerk in the syndicate department of the New York Herald Tribune.

With the exception of U.S. Army service during the Korean War and a brief stint writing for CBS News, Rosenfeld worked for the Herald Tribune until the newsroom’s demise in 1966.

Initially hired for the night foreign desk at The Washington Post in 1966, Rosenfeld was transferred to the metro section in 1970.

As head of the metro desk, Rosenfeld’s instincts told him that little-known reporters Bob Woodward and Carl Bernstein were up to the challenge of unearthing the facts about the Watergate scandal. It was Rosenfeld’s job to keep them on course and make sure they were accurate.

Only in their 20s when burglars broke into the Democratic Party’s national headquarters in 1972, Woodward and Bernstein’s reportage connected the crime to other illegal activities and a cover-up that extended into the highest levels of the federal government.

Ultimately, their revelations and those of other journalists sparked congressional investigations and prompted President Richard Nixon to announce his resignation on Aug. 8, 1974.

“America was fortunate that a journalist as vigilant and committed as Rosenfeld was at the helm of local news reporting when the Watergate break-in occurred, initiating an investigation that truly fulfilled the First Amendment mission of a free press,” said Ken Paulson, dean of MTSU’s College of Mass Communication.

Following the Oct. 8 conversation with Rosenfeld, the audience can participate in a question-and-answer session.

Now editor-at-large for the Albany Times-Union, Rosenfeld also will autograph copies of his book, “From Kristallnacht to Watergate: Memoirs of a Newspaperman.” MTSU’s Phillips Bookstore will have available for purchase.