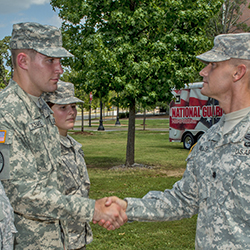 Four new cadets have contracted to be a part of the Blue Raider Battalion in MTSU’s outstanding military science program.

They were sworn in Thursday by U.S. Army Lt. Col. Joel Miller, who serves as professor of military science and guides the program, during a small formal ceremony.

Miller, right, shakes hands with freshman cadet Pleake Thursday after the swearing-in ceremony as the other new cadets look on. From left are junior Slocum and sophomores Hurt and Boyce. leake will major in food nutrition science and minor in German. Slocum will study exercise science; Hurt plans to study psychology; and Boyce plans to study English.