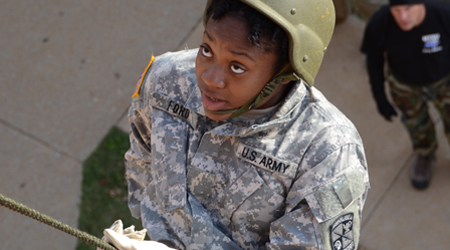 Freshman ROTC cadet Eljahmar Benson rappels down the side of Forrest Hall. (MTSU photos by News and Media Relations)

At least 50 MTSU freshmen and sophomore ROTC cadets found themselves rappelling Oct. 30 off the two-story Forrest Hall, where they take military science courses.

“It was very exhilarating, after the initial flop,” said Cadet Somalia Ford, a freshman exercise science major from Memphis.

Freshman ROTC Cadet Somalia Ford recovers from a quick flip and continues rappelling off the side of Forrest Hall.

Ford was one of several cadets who flipped upside down but regained their balance to complete the drill. Most were rappelling for the first time.

“I pulled myself back up,” she added. “It was fun. It was way smooth and felt natural after that flop. I was more anxious than scared when I was flopping upside down. After that, it was more exciting.”

Cadet Eljahmar Benson, a freshman from Memphis who is majoring in the aerospace program’s professional pilot concentration, said the adventure was “all right.”

“It was pretty cool after I got off the ledge,” he added.

“It was a good day — cold but successful,” Miller said, adding that about 50 students also received goody bags with military-related items.

“We had several groups stop and talk to us. We have several promising leads, but it takes time to see if they come through.”

ROTC cadet Robert Gerrard finds himself halfway to his destination after rappelling off the two-story Forrest Hall.