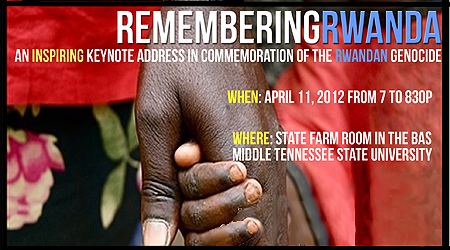 Alice Gatebuke, co-founder and communications director of the African Great Lakes Action Network, will commemorate the April 1994 onset of the Rwandan genocide in an address at MTSU on Wednesday, April 11.

Gatebuke’s free public address will begin at 7 p.m. in the State Farm Lecture Hall of MTSU’s Business and Aerospace Building.

An estimated 800,000 people perished in the bitter fighting between the majority Hutu tribe and the rival Tutsis, who had controlled the country for centuries.

According to AGLAN’s website (www.aglan.org), the group’s mission is “helping to build a world in which there is universal access to peace, justice and prosperity in the African Great Lakes region.” This area roughly encompasses Rwanda, Burundi, Uganda, northwestern Kenya and Tanzania and northeastern Democratic Republic of the Congo.

Gatebuke, a survivor of the Rwandan genocide, is a graduate of Cornell University, where she majored in Africana Studies with a concentration in law and society.

The lecture is sponsored by Students United for Africa and the Study of Africa. For more information, contact SUASA President Stephane Kabelu at 615-968-4277 or sjk2r@mtsu.edu.