‘MTSU On the Record’ goes wild with animal educato...

‘MTSU On the Record’ goes wild with animal educator-entertainer 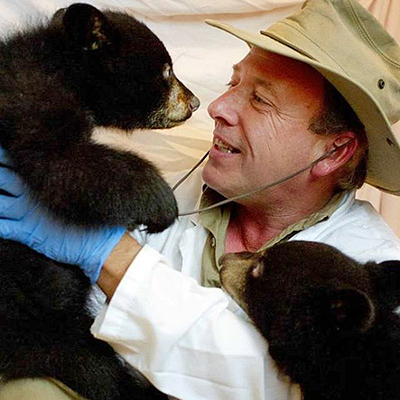 A former MTSU student whose love of animals led him into a wild career was the guest on a recent “MTSU On the Record” radio program.

“Safari Greg” Carter enjoys the company of two baby bears who are being nurtured at the Austin Zoo and Animal Sanctuary in Austin, Texas. (Photo submitted)

Host Gina Logue’s interview with “Safari Greg” Carter first aired Feb. 8 on WMOT-FM (89.5 and www.wmot.org ). You can listen to their conversation below.

Carter, former animal ambassador for the Austin Zoo and Animal Sanctuary in Austin, Texas, now performs his “Amazing Urban Safari” with critters in tow for schools, churches, fairs and festivals throughout the country.

A former student of animal and wildlife sciences at MTSU who now lives in the Austin area, Carter honed his skills while living in Nashville, Tennessee. He is a two-time winner of the Tennessee Governor’s Award of Excellence in Education.

Over the past 20 years, Carter’s adventures have included nurturing a baby kangaroo by keeping her in a makeshift pouch tied around his neck and rescuing a huge yellow python snake from under a motel bed. Carter adopted the snake and named him “Banana Bill.”

He has incorporated stories of his animal encounters into assemblies on topics ranging from life sciences to bullying for clients such as the Nashville Predators, the Tennessee Titans, Texas Parks & Wildlife, the National Children’s Museum and the U.S. Department of Defense.

“I honestly have to say that (retired MTSU horse science program director) Dave Whitaker probably had one of the biggest impacts on me during my college years,” said Carter.

“Not only did I do the horse judging, but I also did the livestock judging there as well. And that gave me an opportunity to speak in front of crowds and develop my ability to get up and speak in front of people.”