‘MTSU On the Record’ flips ove.. 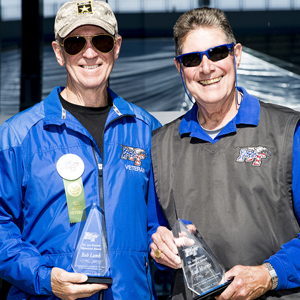 Lifelong friends Bob Lamb and Bud Morris were shocked and humbled when they learned they would be the 2016 co-recipients of the Joe Nunley Award presented at the conclusion of the 35th annual Salute to Veterans and Armed Services picnic Saturday, Nov. 5. 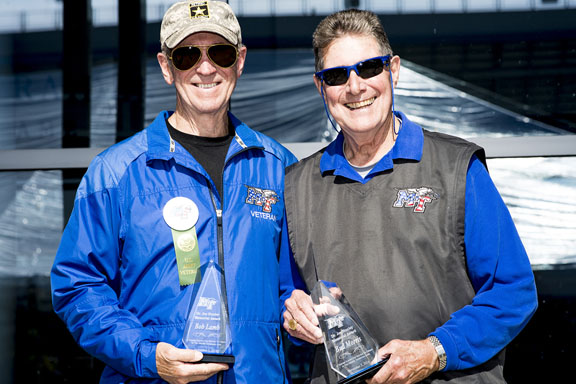 Longtime friends and MTSU alumni Bob Lamb, left, and Bud Morris share the limelight as 2016 Joe Nunley Sr. Award winners. They were recognized Nov. 5 after the Salute to Veterans and Armed Services picnic as part of game-related activities to honor veterans. (MTSU photo by Eric Sutton)

Since 1982, MTSU has dedicated one football game each season to thank U.S. servicemen and servicewomen in the U.S. Army, Navy, Air Force, Marines and Coast Guard for their sacrifices for Americans’ freedom. This year, the Blue Raiders hosted the University of Texas-San Antonio in a Conference USA matchup.

“So many people deserve this,” said Morris, an MTSU alumnus (1968 and ’75) and insurance agent for 45 years in Murfreesboro. “We’re just representing the many people who do all the hard work. I’m humbled to just be nominated for this. I’m very honored to be part of this award.”

Lamb, a 1969 and ’77 alumnus in the real estate business 44 years, called the recognition “very humbling.”

“I was shocked when I learned from Joe Nunley Jr. they were honoring us,” Lamb said. “I am honored to share this with Bud. I just felt like there were so more deserving than I was. … I love my university and I’m very appreciative of this honor.”

Because of recent heart surgery, Nunley was unable to attend the event, held outside the Rose and Emmett Kennon Hall of Fame. The award is named in honor of his father, Joe Nunley Sr., a World War II veteran, former education professor and alumni relations director.

Keith M. Huber, senior adviser for veterans and leadership initiatives at MTSU, was guest speaker for the memorial service. Huber retired as a lieutenant general after nearly 40 years in the U.S. Army. 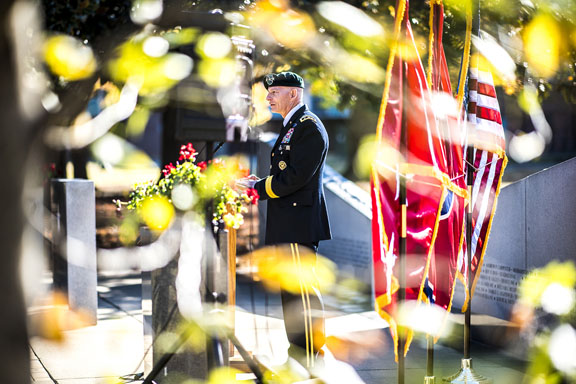 “We find ourselves faced still in combat,” Huber said, referring to the Middle East and Gulf War conflict. “That is what we should remember.”

“It is through the efforts of the leadership of President (Sidney A.) McPhee and the leadership of this university and the support of the community that allows us to continue collectively to serve our veterans and their precious family members,” he added.

“And this is a clear demonstration of that commitment to serve. We who have worn a uniform, we who wear uniforms now are honored to serve our nation, and it’s our responsibility to demonstrate to those who have not served that we are worthy of their support and respect.” 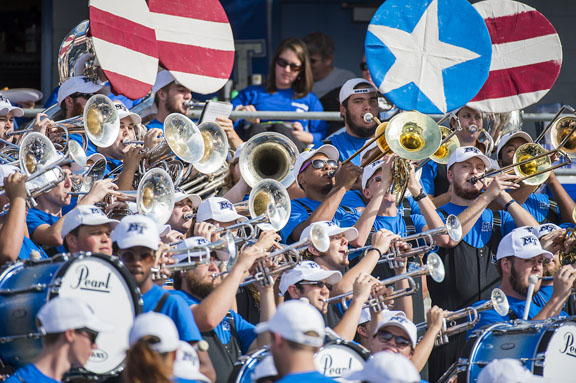 MTSU Band of Blue plays each U.S. military branch’s song as veterans and active duty members walk onto the field at Floyd Stadium at halftime of the MTSU vs. University of Texas-San Antonio game Saturday, Nov. 5, as part of the MTSU Salute to Veterans and Armed Services. (MTSU photo by Kimi Conro)

The 300-plus member Band of Blue performed the theme songs for the various branches of the military, as veterans paraded across the field.

More than 600 veterans and their family members attended the picnic and game. Organizers provide about 500 hamburgers and 500 hot dogs, condiments, chips, soft drinks and water for the special guests.

State Farm sponsored the game tickets given to the veterans and their family members. U.S. Marines collected Toys for Tots at various parts of the stadium before the game.

An autographed Charlie Daniels fiddle and a Blue Raider football helmet were the primary items available during a silent auction. Daniels has donated $120,000 to what is now named the Charlie and Hazel Daniels Veterans and Military Family Center inside the Keathley University Center. Funds raised will go to the center.

The university and athletics marketing department coordinate game-day events and the planning and preparation leading up to the game. 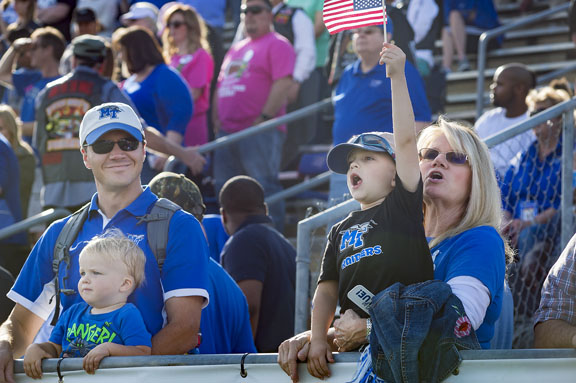 A young Blue Raider fan waves the American flag as military veterans and active duty members take the field at halftime of the MTSU vs. University of Texas-San Antonio game Saturday, Nov. 5, as part of the MTSU Salute to Veterans and Armed Services. (MTSU photo by Kimi Conro) 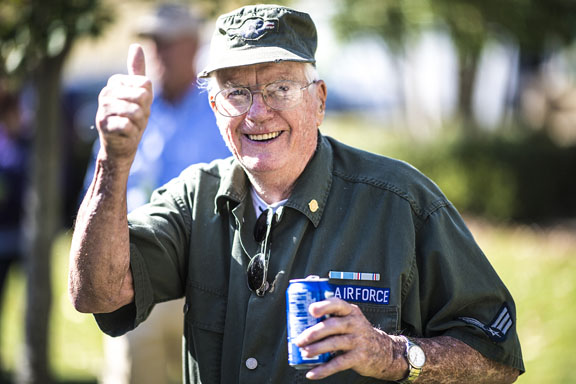 A U.S. Air Force veteran gives a thumbs up showing his enjoyment during picnic activities for the 35th annual MTSU Salute to Veterans and Armed Services game Nov. 5. (MTSU photo by Eric Sutton) 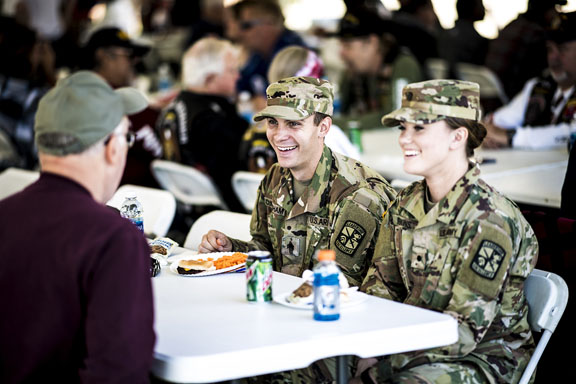 MTSU ROTC cadets enjoy their time with a veteran during the Salute to Veterans and Armed Services picnic Nov. 5 outside the Kennon Hall of Fame. (MTSU photo by Eric Sutton) 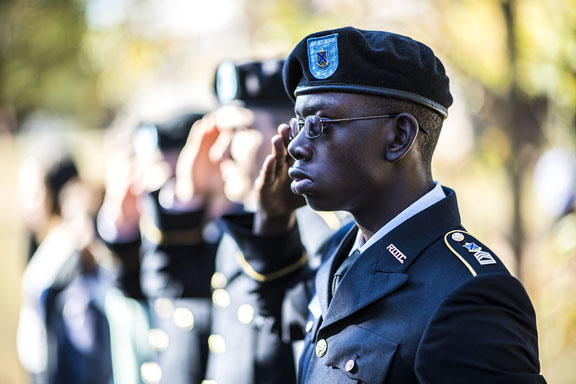 A member of the MTSU ROTC cadet corps stands at attention during the formal ceremony as part of Salute to Veterans and Armed Services events Nov. 5 outside the Tom H. Jackson Building. (MTSU photo by Eric Sutton)