On the Leading Edge 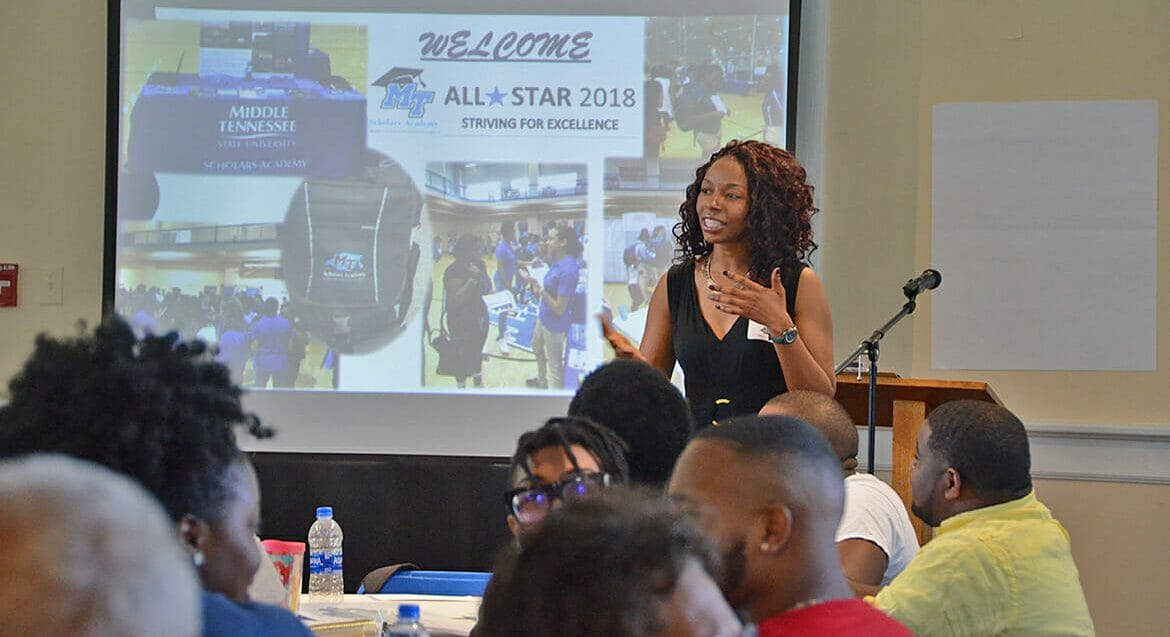 This year’s class of scholars for the academy’s Freshman Summer Institute consists of a record 460 students from more than 10 states, a significant increase from the 357 students enrolled last summer in the two-week immersion program for incoming first-time freshmen.

Pictured, from left, are incoming MTSU freshmen Alisia Chandler, a psychology major, and Dashawndra Stripling, a nursing major. Both students are from Knoxville, Tenn., and are participating in the 2018 Scholars Academy Freshman Summer Institute coordinated by the Office of Student Success. (MTSU photo by K. Simpson)

Incoming freshman Alisia Chandler is excited to get a head start before the start of fall classes in a few weeks.

“I learned about the institute through CUSTOMS this summer,” said Chandler, 17, of Knoxville, Tennessee. “I became interested when I realized it would get me ahead in my classes, and introduce me to new people.”

Designed to serve as a bridge to help students transition from high school to college, the Scholars Academy through the Office of Student Success seeks to enhance the learning experience by providing academic, social and long-term benefits. It was created to serve all students, emphasizing the needs of first-generation and Pell Grant-eligible students.

Brelinda Johnson, manager of the Scholars Academy, has been with the program two years and is excited about new events such as a financial literacy class, new campus/community projects, and a Campus Recreation Center program.

This year the Scholars Academy features eight guest speakers and 50 mentors, while institute students are also again participating in the summer reading program, which features the book “Just Mercy: A Story of Justice and Redemption” by author Bryan Stevenson.

“Scholars Academy gives incoming freshmen nothing but benefits,” Johnson said. “It gives them exposure to the campus, better knowledge over the resources we have, a chance to learn time management, and more.”

Jared Bryson, an 18-year-old psychology major from Chattanooga, Tennessee, said he’s glad to be able to familiarize himself with the sprawling campus.

“I knew that by being in this program meant that I could learn the campus early,” he said. “I made sure to pick a dorm near all of my classes, and I’m looking forward to meeting everyone.”