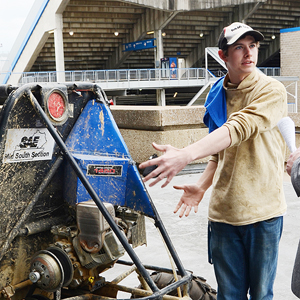 A record 331 students presented posters during the Universitywide conclusion to Scholars Week, which was held in Murphy Center. Twenty-six MTSU faculty members and 15 centers from across campus also participated.

“This gets bigger, more sophisticated and better organized every year,” said Dr. Mike Allen, dean of the College of Graduate Studies and vice provost for research.

“I’ve only seen two (Scholars Weeks) and both were great,” added University Provost Brad Bartel. “The poster sessions were high-caliber. So many disciplines were represented. All in all, it was a great, great week.”

Dr. Kaylene Gebert, former provost and now a Department of Speech and Theatre faculty member, said Scholars Week “gets better every year. You see more students participating this year. I believe some of the labs were asking their students to come and take notes. There were a lot of students talking and taking notes and saying, ‘This is cool.’ They were really engaged.”

Cody Elliott, a sophomore aerospace-maintenance management major, explains the SAE Mini Baja car to Dr. Norman Weatherby of the Department of Health and Human Performance during the 2012 Scholars Day finale.

Dr. Amy Sayward, chair of the history department, has served four years as one of the many volunteer judges.

“This is wonderful because of the variety of projects,” she said. “It’s hard to compare and contrast those. They are different projects with different thought processes behind them.

“I love the idea that we come together as a University community. To know that we have this kind of research going on is why I volunteer.”

During the week, all of the colleges within the University conducted their own Scholars Days. (Read about one such event here.)

“There is a lot of great work going on at MTSU in many different fields,” said Dr. Andrienne Friedli, chair of the Scholars Week committee, a chemistry department faculty member and director for the Center for Advancement of Research Scholarship.

“It’s an opportunity for students to showcase their accomplishments and see what others are doing.”

A list of Scholars Week 2012 award winners is below, as well as a video about the event.

College of Basic and Applied Sciences

College of Behavioral and Health Sciences

Jennings A. Jones College of Business