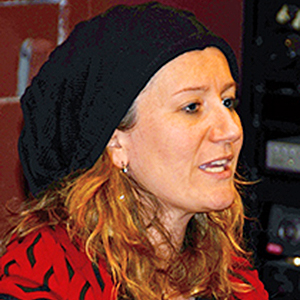 To a group of MTSU mass communication students attending a question-and-answer session with one of the nation’s foremost experts in social media, danah boyd spoke their language.

“Just to have someone of her caliber speak is pretty amazing,” said Tina Shang, a junior nontraditional student from Tullahoma, Tenn. “… She’s very thorough in her research and investigations.”

Boyd, a principal researcher at Microsoft Research and a research assistant professor in media, culture and communication at New York University, appeared March 19 as part of the MTSU Scholars Week activities. She later provided a keynote address in the Student Union Ballroom  and signed copies of her new book, “It’s Complicated: The Social Lives of Networked Teens.”

When engaging students and faculty in a Q-and-A setting, boyd has one objective.

“More than anything, an appreciation for curiosity,” she said. “Go out and be curious. Try and understand how the world works. What are the different things that will help you explain phenomenon you see? Try to question everything, and that kind of critical perspective’s not owned by any discipline or single methodology.”

The New York resident said the fun thing about a Q-and-A is you move between faculty and students, and of course people’s experiences and understandings of these are so radically different.

“And, of course, I’m a sucker for questions from students,” she said. “So I was excited when they started jumping in and asking questions about what I see of social media. And part of it they’re all living it and they get to see the good, bad and ugly of it.”

Boyd, an anthropologist chosen by Time magazine as one of the top 40 “Most Influential Minds in Tech” in 2013, showed her passion for social media knowledge during the entire 60-minute session.

“I love what I do,” she said. “I love research and want other people to be excited about what they’re working on or how they’re seeing the world around them. I don’t think you could do this kind of work and spend these kinds of hours if you didn’t love it. “

“It’s the weakness of anthropological work,” she added. “You fall in love with the people who help inform you. And you want to make certain their world is better off because of what you do. I try to be really true to the teenagers that I’ve spent so much time with, who’ve spent so much time telling me their stories and hope that I can give back and make the world better for them and the next generation.”

As a new media communications major in the College of Mass Communication, Shang said her course concentration falls in line with the academic exploration and pursuits by boyd, who has become mainstream media’s go-to person regarding social media, particularly with teenagers.

“I didn’t ask any questions,” said Shang, a University Honors College transfer fellow. “I particularly was interested in the conversation (between boyd, students, faculty and visitors) and listening to her. My Honors thesis is on women in technology, and I actually follow her online.”

With five children ranging in age from 5 to 23 and three grandchildren ages 2, 4 and 6, the 42-year-old Shang has a vested interest in all social media.

“I think the fears of an addiction to technology are unfounded and the research she’s done shows that,” Shang said.

“She gets it,” Paraiso said of Boyd’s research and methods of public explanation through writing and verbal communication. “She’s very perceptive and has embraced social media. She’s recognized it has changed the way we conduct business and education, and influenced politics.”

Senior computer science major Sarai Price of Christiana, Tenn., who posed a question, said her takeaway from the  Q-and-A dialog was that “each generation is separated based on how America has formed” and social media “closes those gaps because it gives children the ability to communicate with people older than them.”

“She (boyd) said when a person gets on a social media account, if they have more than one, essentially they create a map. And the map spreads with the more social media accounts you have,” Price said. “… It’s all about connections and creating maps.”

The eighth annual Scholars Week continued Thursday, March 20, and Friday, March 21. For a complete schedule, visit www.mtsu.edu/research/scholarsWeek/index.php. All events are open to the public.

The March 21 Universitywide Scholars Day will showcase students’ research from 12:40 to 3 p.m. in the Student Union Ballroom. It is open to the public.

About 180 posters will be presented during Friday’s finale event. Posters awarded first place by judges will be on exhibit March 24-30 in Walker Library.