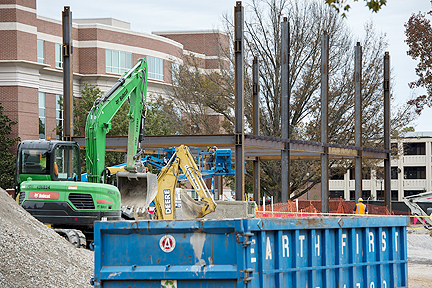 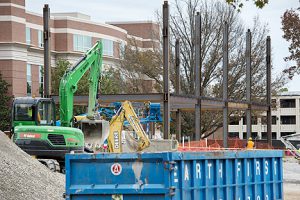 Employees for Turner Construction Co. raise the first beams Oct. 11 on MTSU’s new $147 million Science Building. The new building will provide more than 250,000 gross square feet of teaching, faculty and student research laboratories and collaborative learning spaces. Spring 2015 is the expected completion date for the project. The project was placed on the Tennessee Board of Regents capital outlay priority list in 1998, and remained MTSUâs and the TBRâs No. 1 priority on the list, as well as the Tennessee Higher Education Commission’s highest priority on its five-year capital projects plan. The university’s existing Wiser-Patten and Davis science buildings were built in 1932 and 1967, respectively, and have only 75,332 net square feet. Turner Construction Co. is headquartered in New York City and has a local office in Brentwood, Tenn. (MTSU photo by Andy Heidt)