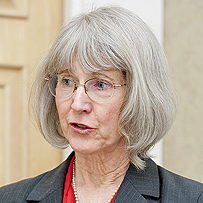 But because politics is involved, Scott said, she expects the Legislature to pass them.

“These bills are a bad idea pedagogically. They’re a bad idea legally,” said Scott, a physical anthropologist who was in Murfreesboro and at MTSU March 23 for her Scholars Week keynote address, “Controversy Over the Teaching of Evolution.”

“The best thing would be for these bills to be withdrawn and forgotten about, but it looks like they’re going to pass.”

Scott was referring to Tennessee HB368 and SB893, which, as introduced, “protects a teacher from discipline for teaching scientific subjects in an objective manner.”

The measure now awaits action by Gov. Bill Haslam after the state House of Representatives approved it with a 72-23 vote late March 23. The Senate bill, with an amendment clarifying that science teaching must remain “within the framework of the curriculum” set by the Board of Education, passed March 19. Haslam has said he will discuss the bill with the state Board of Education.

Scott, executive director of the National Center for Science Education in Oakland, Calif., has been a researcher and an activist in the creationism/evolution controversy for more than 25 years.

Possibly by coincidence with her appearance at MTSU—where she met and talked to students in biology and philosophy classrooms in the morning, had a mid-afternoon session with media and then made her hourlong presentation to students, faculty, staff and people from the surrounding community—the news section at her center’s website (http://ncse.com) highlighted the Tennessee controversy multiple times March 23 and 24.

“These bills are part of a group of bills called ‘Academic Freedom Acts’ that have been making the rounds for about the last five, six, seven years,” Scott said. “There’s about 40 of them that have been proposed in various state legislatures, including several here in Tennessee.”

“What these bills do is provide a backdoor way for creationism to be taught. They are couched in terms of critical thinking; they’re couched in terms of these very user-friendly ideas of the importance of students critically analyzing or engaging with the data. And everybody thinks that’s fine.

“The trouble is … if you look at the history of these bills and you see how these bills have evolved, they really evolved in response to illegal decisions that have curtailed the teaching of creation, creationism and intelligent design in the public schools,” Scott continued. “And they are an effort to duck under the First Amendment and see if they can’t legally encourage teachers to bring them into the classroom.”

Scott definitely is not sold on the legislators’ thought process.

“And it’s also unconstitutional. Our public schools should be religiously neutral
places, where regardless of your religious view, or no religion at all, you should feel free to come and not be proselytized by somebody else’s sectarian religious views.”

As far as the politics of the issue, Scott said public-school teachers are caught in the middle of what she believes is a wrong decision by legislators.

“The creation and evolution issue is a culture-war issue,” she said, “and it’s being played out on the backs of high-school and middle-school teachers. They shouldn’t be made to bear that burden.

“If you want to argue about creation and evolution, fine. Do it outside the science classroom. The science classroom should be a place where kids learn basic standard science that isn’t being turned inside out because some legislators or some state school-board members are trying to satisfy political constituencies. It’s just gravely unfair to do that.”

Watch a brief video about Scott’s visit below.