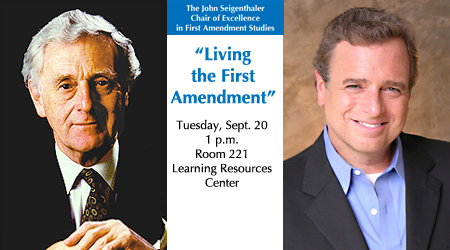 The news industry’s finest father-son team will discuss how they’ve been “Living the First Amendment” on Tuesday, Sept. 20, at MTSU.

The free public event will begin at 1 p.m. in Room 221 of the McWherter Learning Resources Center on campus. It is sponsored by the John Seigenthaler Chair of Excellence in First Amendment Studies.

“Both men have enjoyed extensive and highly impressive professional careers, serving as role models in living and promoting the First Amendment. Their interactive dialogue on the history, current status and future as well as the rights and responsibilities of this cornerstone of our democracy will be highly interesting and insightful.”

John Seigenthaler was a reporter, editor, publisher and CEO of The Tennessean as well as an administrative assistant for then-U.S. Attorney General Robert F. Kennedy. After serving as founding editorial director for USA Today, the elder journalist established the First Amendment Center at Vanderbilt University, which promotes dialogue about freedoms of speech, press and religion, in 1991.

In 1986, MTSU established the John Seigenthaler Chair of Excellence in First Amendment Studies, honoring the veteran journalist’s lifelong commitment to free expression. The Seigenthaler Chair, housed in the College of Mass Communication, supports a variety of activities related to free speech and free press rights.

John Seigenthaler Jr. spent more than 28 years as a broadcast journalist. For nearly a decade he was the anchor of the top-rated “NBC Nightly News” weekend broadcasts. He covered some of the top stories of our time, including the 9/11 terror attacks in New York, Hurricane Katrina, the tsunami in Sri Lanka, terror attacks in Europe and the Middle East, U.S. presidential campaigns and national political conventions.

As the CEO of Seigenthaler Public Relations – New York, the younger Seigenthaler now develops strategic communication plans for his clients. He also is a member of the College of Mass Communication’s Board of Professional Advisors.