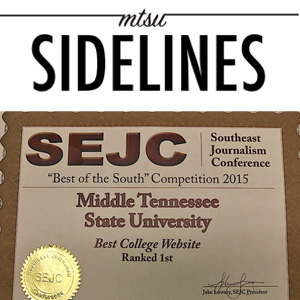 MTSU student journalists are celebrating the first-place win for www.mtsusidelines.com in the Best College Website category at the 2015 Southeast Journalism Competition. (Photo courtesy of MTSU Sidelines)

Rounding out the top honors was first place in the Best College Website event, honoring the redesign of www.mtsusidelines.com that went online in 2015. Students were judged on their work published between November 2014 and November 2015.

“I couldn’t be happier about the awards brought home by our student journalists,” said Leon Alligood, faculty adviser to Sidelines. “It’s very rewarding to see their hard work recognized.”

Sarah Taylor won three awards: a second in the Best News Writer category, a third in Best Multimedia Reporter and a 10th in the College Journalist of the Year categories.