Six Steps to Getting Your Grad.. 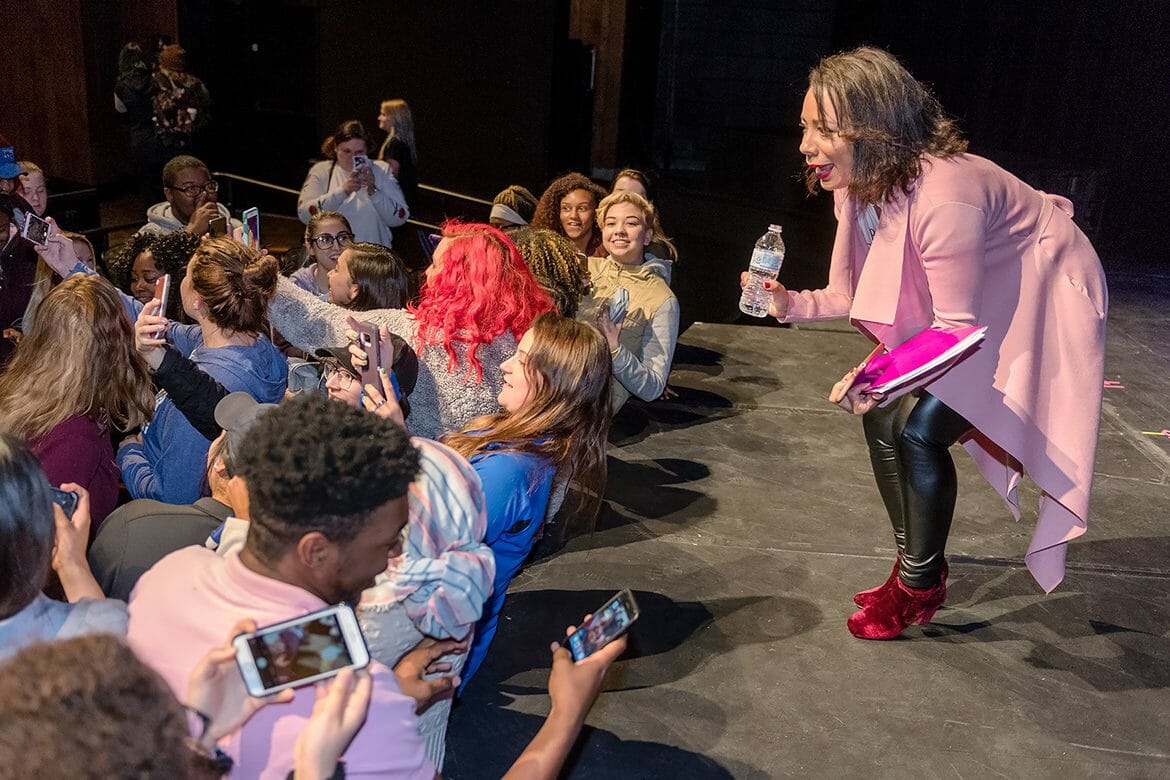 Growing up in the Bronx, New York, Selenis Leyva didn’t see herself as the poverty-stricken 13-year-old girl others treated her from childhood to adulthood.

“I had my locker vandalized with all these nasty words spray-painted on it and I realized, ‘Wow! I thought I had been accepted, but clearly that’s not the feeling,'” Leyva said during her April 9 address in Tucker Theatre.

Leyva, who portrays jail inmate Gloria Mendoza in Netflix’s “Orange is the New Black,” was this year’s keynote speaker for students, faculty and staff for MTSU’s celebration of National Women’s History Month.

The actress spoke on the importance of representation both on and off the screen.

“I knew from a very early age that people would look at me, judge, and say ‘you’re not enough,’ tall enough, light enough, dark enough, old enough — enough.”

Barbara Scales, right, director of MTSU’s June Anderson Center for Women and Nontraditional Students, smiles as she has her poster autographed by MTSU Women’s History Month keynote speaker Selenis Leyva, one of the breakout stars of Netflix’s hit series “Orange Is The New Black.” Leyva shared her thoughts about self-image, diversity and inclusion April 9 inside MTSU’s Tucker Theatre. (MTSU photo by J. Intintoli)

The “Special Achievement Award” recipient, presented by the Association of Latinos as Motivating Action,considered getting a “normal job” after 20-plus years of trying to achieve a steady career as an actress. Instead she took a different route.

“I have to work hard because I don’t have the same opportunities. … I don’t want someone to tell me that I got to where I’m at because of diversity,” Leyva said.

Logan Noah, a MTSU junior textiles, merchandising and design major from Jonesboro, Tennessee, said she feels that Leyva’s speech empowered her to in turn empower friends around her.

“She was able to show me how my differences make me stand out in a good way … for her to say that I can be anybody and be enough spoke to me because I am plus-sized and feel like I face a lot of criticism because of it”, Noah said.

Leyva considers herself an Afro-Latina woman on a mission to defeat critics in life through determination and resilience.

“I hope telling my story will inspire and give fuel to people. … I wish that somebody would have spoken to me when I was younger so I wouldn’t have felt by myself or alone in many situations,” Leyva said.

After graduating from the Fiorello H. LaGuardia High School of Music & Art and its performing arts acting program, Leyva said she decided it was all right to play roles as a maid or servant, which she says are stereotypical, Latino-driven parts. She knew, however, that she could and would do more.

“Little did I know those would be my roles, but things have changed and progressed,” Leyva said.

Leyva noted that, even though stories of Afro-Latina women haven’t been fully told, opportunities such as speaking to college students give her the chance to change this issue.

“I love speaking to young people because you guys have so much power, and we’re living in a really powerful time for either great change or failure,” Leyva exclaimed.