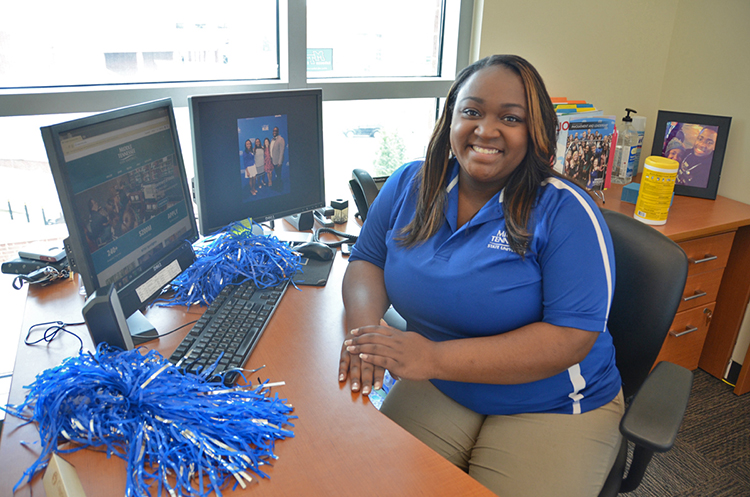 New Student Government Association President Courtney Brandon is standing by the words of the True Blue Pledge — “I am a valuable contributor” — as she steers the Blue Raider student body toward a stronger voice on campus.

The senior exercise science major hopes to hone her leadership skills as she helps shape the campus environment during her SGA president tenure.

“We have over 20,000 students, and showing them that they’re able to make an impact just by being a student … they have a platform,” Brandon said.

During the academic year, her agenda includes giving students the opportunity to thoroughly understand how to make changes they would like to see happen around campus.

“My mission is to create an educational program for students, which includes teaching them how to make legislation, bills and resolutions that will improve this campus,” Brandon said.

The Nashville native devoted herself to the organization after serving as a representative for Hume-Fogg Magnet’s SGA in high school.

“SGA was all I ever knew about because of my involvement in high school … I continued my journey by serving on freshman council (at MTSU) and fell in love with the experience,” she said.

Along with the SGA Senate, Brandon said she believes her hands-on initiative will promote improvements for the university. The philanthropic, internal affairs, and student life committees are a few of the subgroups that make up the SGA, which serves as the official liaison between the student body and the university administration.

“My senators are amazing, and I can tell we have a ton of leaders,” she said. “When it comes to empowering them, I always let them know that I’m here, whether they call or text me — I always try to make myself available in order to help my senate.”

“Courtney has hit the ground running as the 2017-18 SGA president,” Kelley said. “I have also been impressed with some of the new initiatives Courtney’s team is planning, which include increasing the visibility of SGA via Meet Your Senator events and informational sessions for various student organizations.”

It’s been an interesting journey for Brandon, who initially had other plans when deciding on which college to attend a few years ago.

“Originally, I had told myself that I was going to Georgia State University,” she said.

In the end, after going through CUSTOMS new student orientation in summer 2014, she chose True Blue. Soon she grew fond of everything MTSU had to offer.

“I thought that maybe it was a sign I need to be closer to home, and since then, MTSU has given me a quality education,” Brandon said.

Growing up in a single-parent household, Brandon attributes much of her own growth in both maturity and leadership skills to her mother, Ruby Brandon.

“Watching her grow and raise three children by herself … I think I had no choice but to realize some of my own abilities, because I see so much of her in me,” she said.

Brandon, who is a member of Delta Sigma Theta Sorority Inc., has a twin sister and older brother who also attend MTSU.

That’s a comfort for her “just knowing another person is always here,” she said.

For more information about MTSU’s Student Government Association, go to www.mtsu.edu/sga. To contact Brandon, email sgapres@mtsu.edu or call the SGA office at 615-898-2464.