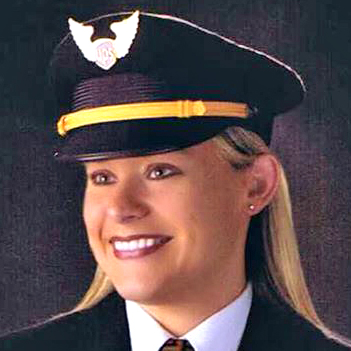 By all accounts, she had a deep passion to fly. Family and friends of Middle Tennessee State University alumna and UPS pilot Shanda Carney Fanning want to honor that passion by establishing a scholarship in her memory.

A Lynchburg, Tenn., resident and Shelbyville, Tenn., native, Fanning was one of two pilots killed Aug. 14 when their United Parcel Service airplane crashed in Birmingham, Ala. She was 37.

MTSU alumna and UPS pilot Shanda Carney Fanning, shown here in uniform, was killed in an Aug. 14, 2013, crash in Birmingham, Ala. MTSU is establishing an aviation scholarship in her memory; click on the photo above to make a donation. (Photo submitted)

Like many, best friend Whitney Dix, also a pilot and currently a dispatch manager with Southwest Airlines in Texas, was devastated by Fanning’s death. But Dix is determined to keep her memory alive by spearheading a drive to establish a scholarship at their alma mater — The Shanda Carney Fanning Aviation Memorial Scholarship.

Fanning graduated from Shelbyville High School before earning her bachelor’s degree in aerospace administration from MTSU in 1999. Her husband, Brett, works in distribution at the Jack Daniels Distillery in Lynchburg.

“I want to give back to the aviation community and keep her memory and love of aviation alive,” Dix said.

Amy Hardin, development director with the MTSU College of Basic and Applied Sciences, explained that a minimum of $25,000 must be raised to endow the scholarship, which would be awarded annually to aviation students studying in MTSU’s nationally known aerospace program.

Hardin said Dix approached her with the scholarship idea following the memorial ceremony for Fanning.

“This scholarship is very important to me because Shanda was my best friend for 18 years and I want her name to live on at MTSU,” Dix said. “We shared a love of aviation and our alma mater. MTSU and the Aerospace Department were a huge part of who we became as individuals and ultimately shaped our lives, our friendship and our careers.”

Dix has begun contacting organizations interested in donating to the scholarship fund, which is being managed by the MTSU Development and Foundation Office.

Hardin said details on the scholarship guidelines are still being finalized, but the goal is to begin awarding it for the 2014-15 academic year. The long-term goal is to increase the award to the university’s Centennial Scholarship level, which requires a $100,000 endowment.

Anyone interested in giving to The Shanda Carney Fanning Aviation Memorial Scholarship can do so online at www.mtsu.edu/fanningscholarship or by calling Amy Hardin at 615-898-5003 or via email at amy.hardin@mtsu.edu.