A Murfreesboro high school provided evidence of how a connection with higher education can make its students far more prepared for college and for life.

The Siegel Humanities Academy concluded its first semester Tuesday, April 26, with a celebration of scholarship and partnership attended by school and university officials. The academy is a collaboration between Murfreesboro’s Siegel High School and MTSU.

“It gives high school students the opportunity to prepare for college and career … so that they can be successful in their next step in life,” said Leah Lyons, dean of the MTSU College of Liberal Arts. 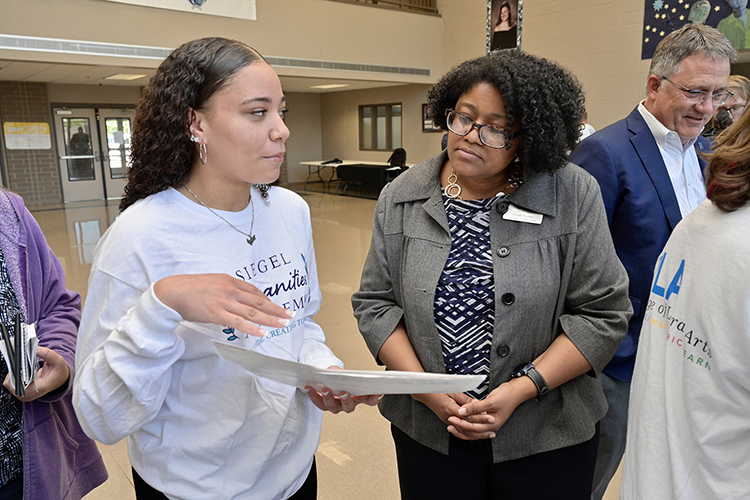 Jaxyn Luscinski, a Siegel High School junior, explains her Siegel Humanities Academy project to Leah Lyons, dean of the MTSU College of Liberal Arts. The academy, a collaboration between the high school and the university, celebrated the conclusion of its first semester in an April 26 ceremony at the high school. (MTSU photo by Andy Heidt) 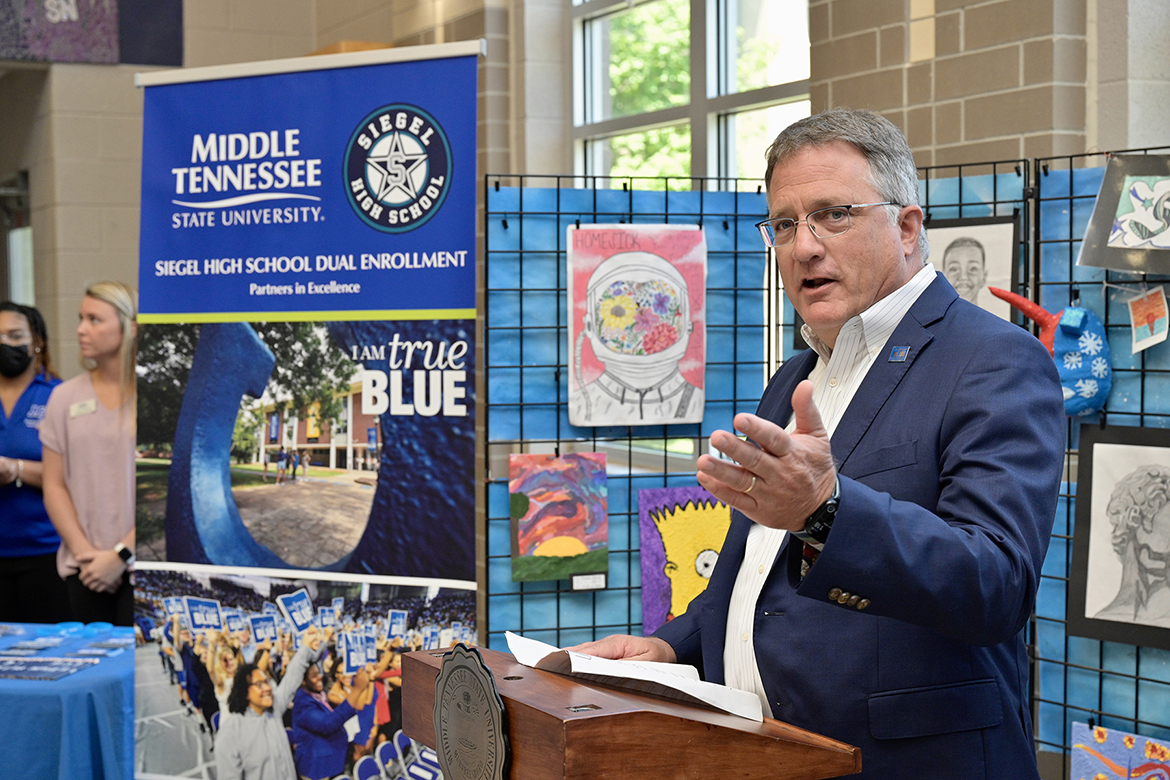 Standing before a display of student art work, MTSU Provost Mark Byrnes touts the success of the Siegel Humanities Academy, a collaboration between MTSU and Siegel High School, during an April 26 ceremony at Siegel. (MTSU photo by Andy Heidt)

Lucy Langworthy, assistant to the dean and a pivotal force in the academy’s creation, told the students they will receive the assistance they need.

“We’ve got MTSU people here that are supporting you guys and are ready to help you with that next step after high school,” Langworthy said.

MTSU Provost Mark Byrnes, who was a member of the Rutherford County School Board for eight years, said the foundation is based on teaching creativity, communication, critical thinking and community.

“Our goal is to help your students learn humanities skills demanded by today’s careers, form strong bonds with academy teachers and advisers, connect with community partners and complete a rigorous program of study,” Byrnes said.

“This partnership allows our students learn more about career choices offered in the humanities pathways,” Creasy said. “MTSU is providing opportunities for our students to meet and learn with former MTSU alumni by empowering our students with soft skills needed to navigate in society and the work force to become global citizens.”

Several academy students’ projects were displayed in the first-floor lobby.

Senior Benjamin Martin’s poster, titled “The Electric Chair,” was about the execution method invented in 1881 by Alfred Southwick.

The poster presented the device as a technological innovation that might have been touted during the Industrial Revolution, long before society began to consider electrocution an unconstitutional form of “cruel and unusual punishment.”

“I actually was very introverted when I came here, but joining the (academy) and being involved with all these projects, communicating with people and doing all the research and coming up with ideas together, has made me so much more extroverted,” Martin said. 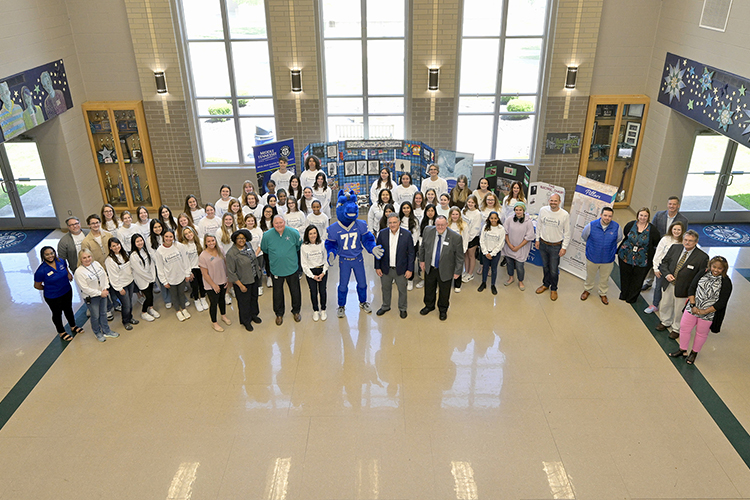 Representatives of MTSU and Murfreesboro’s Siegel High School, as well as students of the Siegel Humanities Academy, celebrate the conclusion of the academy’s first semester at an April 26 ceremony in the high school’s first-floor lobby. (MTSU photo by Andy Heidt)

Junior Jaxyn Luscinski produced a one-page presentation about American Cold War society, which covered various aspects of the era from McCarthyism to the threat of nuclear warfare. She included an original poem.

“Everyone’s mind was on Communism/Next thing you know, we got McCarthyism/Elvis came about to rock and roll/Only the best recorded at Sun Studios,” Luscinski’s poem read in part.

All students who enter the academy are required to complete three humanities/fine arts elective credits and attend three academy talks per year on such topics as career opportunities, interview skills and work etiquette.

• Involvement in at least one academic school-sponsored club each year.

• One job-shadowing experience per year in the 10th through 12th grades.

Byrnes said he hopes the program becomes a model for other high schools to follow.

“We are looking for special relationships with every high school here in Rutherford County,” Byrnes said. 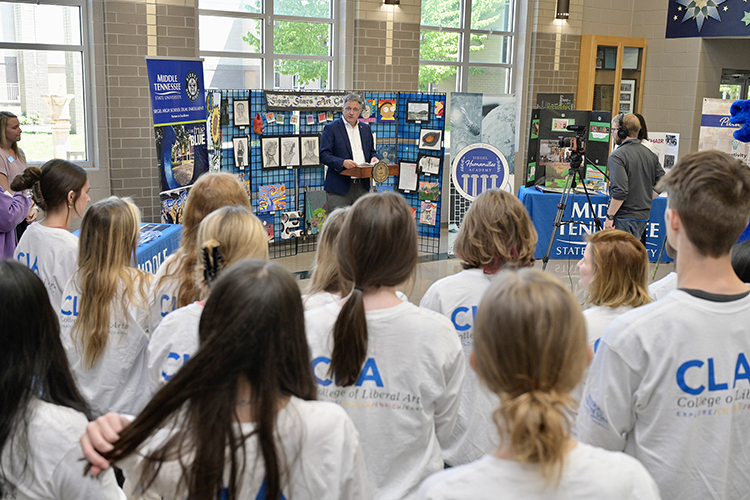 MTSU Provost Mark Byrnes praises students of the Siegel Humanities Academy for their accomplishments at the end of the program’s first semester. Byrnes spoke at an April 26 ceremony at Siegel High School in Murfreesboro. (MTSU photo by Andy Heidt)