MTSU In the News: Teaching, st.. 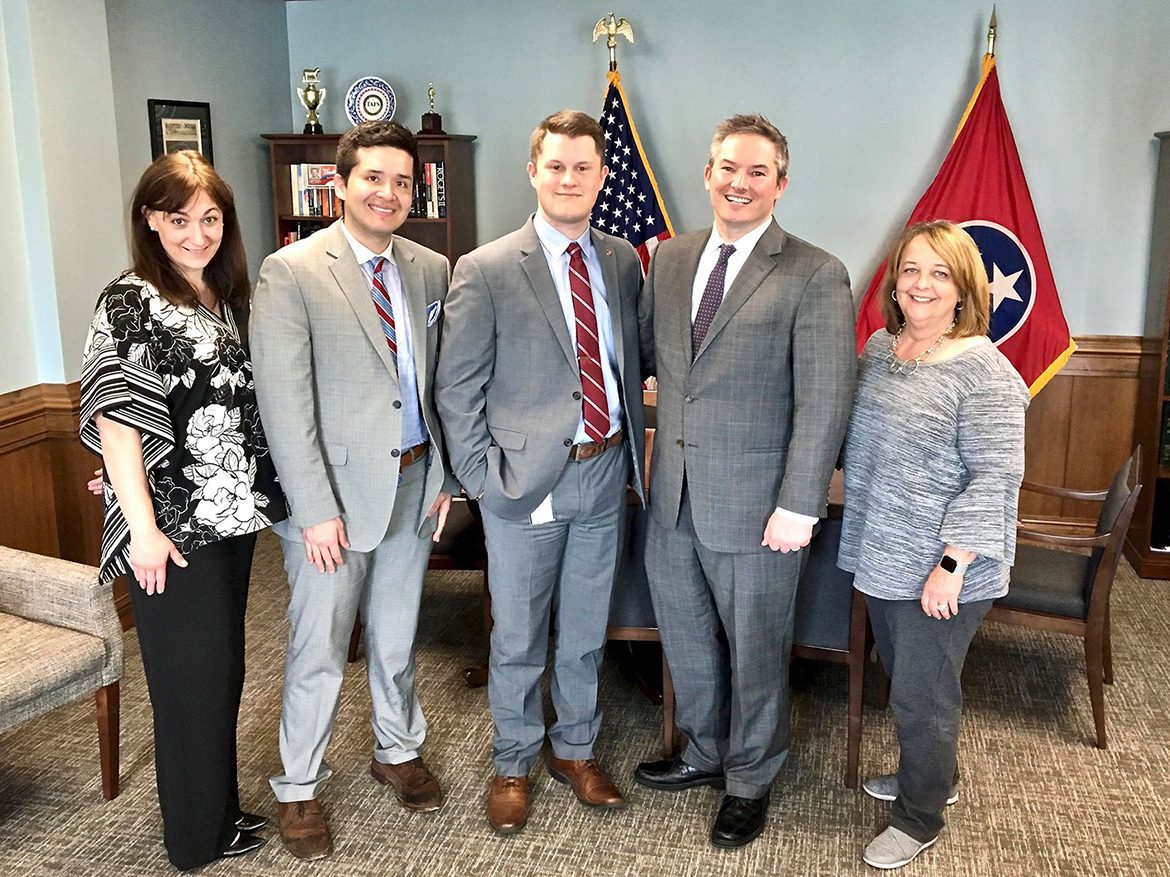 To say recent Middle Tennessee State University spring graduate Dalton Slatton “fit the bill” during his legislative internship would be somewhat of an understatement.

Slatton, 21, of Whitwell, Tennessee, interned during the most recent session of the Tennessee General Assembly in Nashville, Tennessee, for state Sen. Jeff Yarbro, the Senate Democratic leader.

Before graduating in early May with a degree in political science (pre-law concentration) and a minor in criminal justice, Slatton finished up his paid internship knowing that he had successfully crafted and lobbied for a bill that passed both houses of the General Assembly — a feat veteran Capitol staffers told him may very well have been a first for an intern. 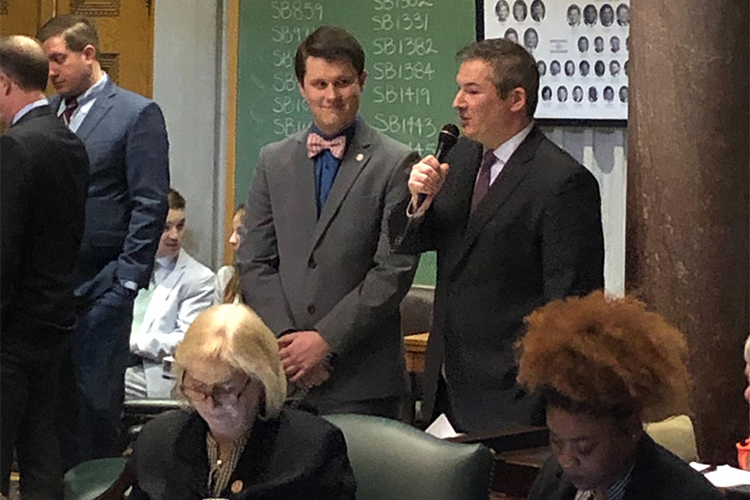 While there doesn’t appear to be an official record about such intern activities, Slatton said he’s “OK with being on that short list of people that have accomplished this … It was a very unique experience.”

The legislation, which passed unanimously in both houses, amends state law to increase the maximum number of dual-enrollment courses that high school juniors and seniors can take from eight to 10, meaning a motivated high school student could complete 30 credit hours of coursework before graduating high school — thus knocking off a full year of college before setting foot on campus.

Said Yarbro: “This year I tried something different with my intern. I asked him to come up with an idea for a bill, tasked him to get it drafted, find co-sponsors, and work on getting it passed. Dalton took my task to heart, and now because of his efforts, students will have more opportunities to expand their education through the dual enrollment field than ever before.”

It all started, Slatton recalled, when Yarbro’s senior policy adviser Lauren Agee, also an MTSU alumnus, approached Slatton with an assignment. With Yarbro’s blessing, Slatton would draft a piece of legislation for consideration. It was the week of the filing deadline for legislation, so Slatton had to think relatively fast.

“I was trying to think of something that was a small change, but that would help people, and have a low fiscal note … because the cost of legislation is a key consideration for lawmakers,” he said.

Relying on his personal experience, Slatton recalled taking dual enrollment courses during his junior and senior years at Whitwell High School in Marion County, Tennessee, through a partnership with Chattanooga State Community College. He enrolled at MTSU with 24 credit hours already under his belt and the reasonable possibility of graduating in only three years for a motivated student such as himself.

But to do so, Slatton ended up tacking on two extra courses his first year at MTSU, leading to 18-credit hour semesters— and the loss of a 4.0 GPA because of the workload. That wouldn’t have been an issue had Slatton and other high school students been allowed to take up to 30 credit hours while still in high school.

Yarbro sponsored the bill in the state Senate, but Slatton also needed a House sponsor, which he found in a hometown lawmaker, state Rep. Iris Rudder of District 39. Slatton was grateful that Yarbro not only allowed him to draft legislation, but also lobby for its approval by visiting a host of lawmakers who sat on the various committees and subcommittees that would have to first review and approve the legislation. 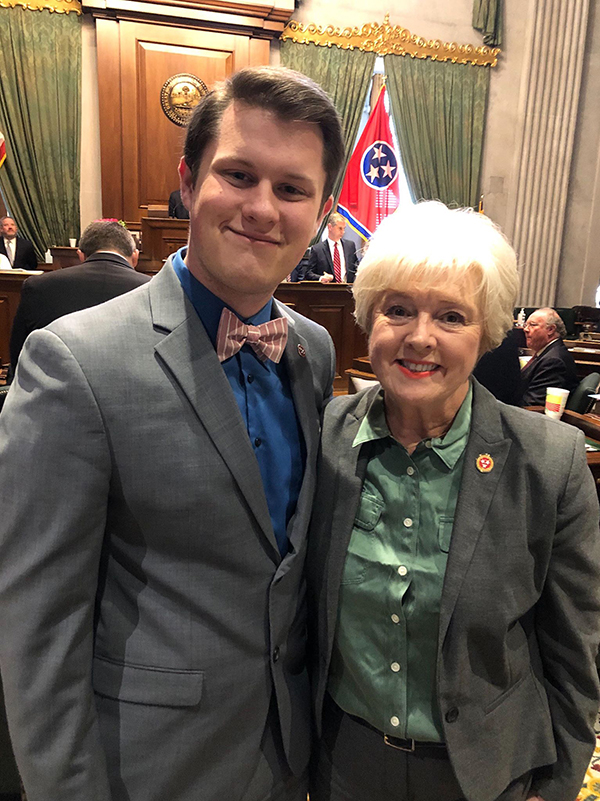 MTSU spring graduate Dalton Slatton, left, of Whitwell, Tenn., is shown at the Tennessee Capitol in Nashville with state Sen. Janice Bowling, R-Tullahoma, earlier this spring during his legislative internship. Slatton, who graduated in May with a political science degree, interned for state Sen. Jeff Yarbro, D-Nashville. (Submitted photo)

“We have almost 2,000 bills filed in the General Assembly each year and Dalton found out exactly how difficult it is to actually get one passed,” Yarbro said. “This bill alone went through eight committees between the House and the Senate and passed on the floor in both chambers, and because there was a small fiscal cost we had to get it funded in the budget, which is no easy task.

“I am proud of the bipartisan work Dalton put forward to expand our dual enrollment program and I truly think the legislation we passed will benefit future students, just like Dalton, who put in the extra time and hard work to go further in life.”

Slatton was impressed with “how nice, genuine and receptive the lawmakers and their staffs were” to him since “interns are low on the totem pole.” But he thoroughly enjoyed the experience and noted that lawmakers from both parties “are generally cordial and hundreds of bills get passed without the rancor and squabbling that, rightfully, make the news.”

“Sen. Yarbro and Rep. Rudder allowed me to meet with their colleagues and pitch the idea, and do all of the research, and come up with one-pagers for them to present on the floor,” Slatton said, noting that amendments were required to sync language from his bill with that from the governor’s office. “I was very hands on in the process.”

Slatton’s internship lasted from early January through early May when the session ended. He earned 12 credit hours for the internship and is grateful the College of Liberal Arts participates. The college is involved in two paid legislative internship programs: a competitive one administered through the legislature where students across the state apply for assignment to any lawmaker and another that MTSU administers for its students that is tied specifically to lawmakers representing Rutherford County.

“Even before he came to the university, Dalton had been deeply involved in community activities in Chattanooga, and he continued his commitment to activism and involvement here at MTSU,” Carleton said. “… What really stood out was his deep involvement in university and community activities — in the SGA, Mock Trial, student organizations, working on multiple political campaigns and community volunteer efforts.

“He believes in being a part of and building a meaningful community, and he works constructively to build this type of community.”

Carleton said the internship program allows students to “gain a real appreciation of the details and nuances of politics and public policy that go well beyond what we can do in the traditional classroom. The experience is hands-on, direct, and personal. Even more, the legislative interns develop the skills and habits for a professional workplace, they find mentors, they network with legislators, state executives, lobbyists, and community leaders, and they hone their communication skills.”

He continued: “The program is invaluable in developing hard skills, knowledge about politics, policy, and governance, and the crucial soft skills that are needed in all work settings, dealing with professional attitudes, habits, demeanor, and communication. Legislative interns are thus much better prepared to move into their professional lives after graduating from MTSU.”

Added Slatton: “It’s really a cornerstone of the political science department and they really push that … if you’re able to do the internship and it fits in your schedule, they really encourage you to do it, and I’m glad they did because it was tremendously helpful (with) networking and building communication skills. It’s an overall experience that most people never get.”

Since graduation, Slatton’s back home enjoying the outdoors for the summer before starting law school in the fall at the College of William and Mary in Williamsburg, Virginia. Before this internship, his career plan was to “be a bureaucrat” involved in privacy issues and constitutional law after having his interest piqued by a homeland security course the previous semester.

“But this internship did show me that I do have a love for public service. I’d kind of known that growing up — I did a lot of community service and tried to help where I could. It’s different walking away from this internship, there’s something different about how I look at elected officials and serving in that capacity,” he said.

“It is definitely something that in future, if it’s in the cards, that I’m able to serve wherever I am, whether that’s coming back to my hometown and practicing law while serving as a state representative or state senator.”

While public cynicism about politicians continues to grow, Slatton prefers to focus on the positive impact that representative government can have on the lives of citizens, from health care to jobs to education and numerous areas in between.

“I think the government is there to help and not hurt and I would enjoy helping people making sure their lives are easier, and more beneficial and productive and their overall quality is better.” 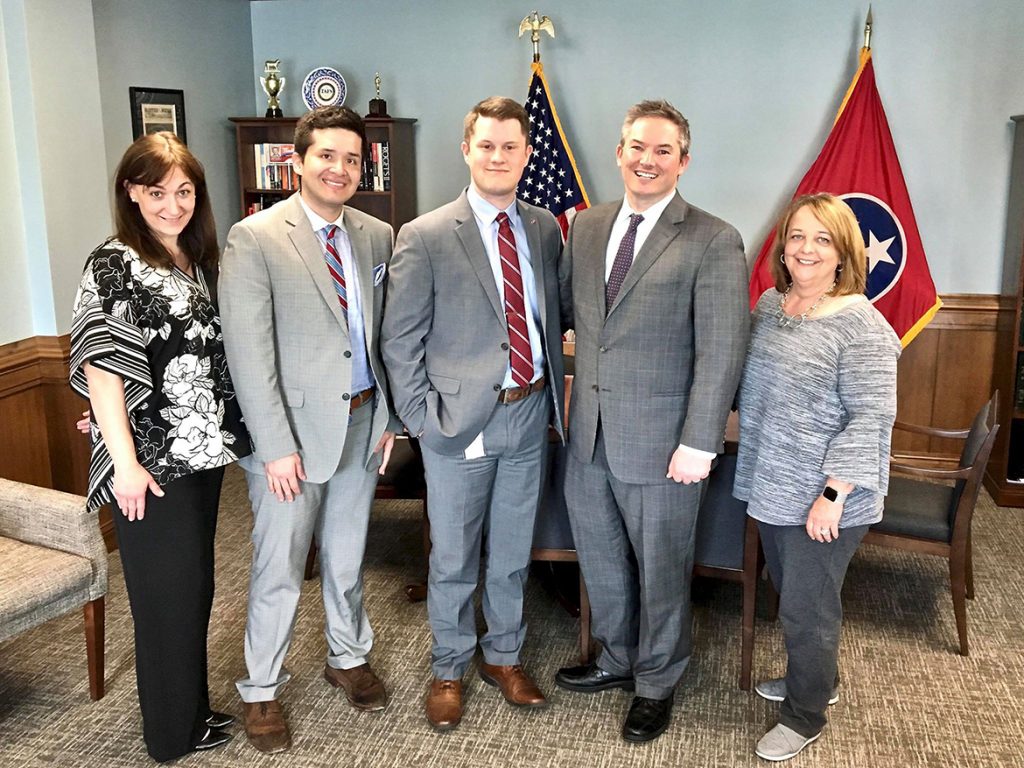