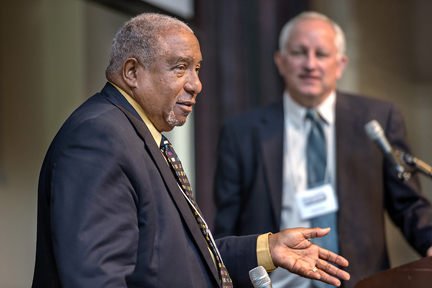 Soft-spoken but oozing a hardened resolve, civil rights legend Bernard Lafayette Jr. captivated his MTSU audience Thursday, Oct. 29, with memories of growing up in the throes of segregation while fueled by a burning desire to fight for equality for all.

This year’s symposium theme, “Voting Rights 1965-2015: Commemorating 50 Years,” recognized the anniversary of the nation’s Voting Rights Act while looking at challenges today. All events were free and open to the public.

With current youth-led movements such as Black Lives Matter harkening back to the activism of the 1960s and stirring controversy anew, perhaps it was fitting for a predominantly MTSU-student audience to hear wisdom from a man who was arrested 30 times, kidnapped twice and was with Dr. Martin Luther King Jr. in Memphis on the morning of his assassination.

The 75-year-old Lafayette shared the story of the “life-changing moment,” when he was 7 years old, that planted the seeds of his activism.

He was with his grandmother in Florida, trying to catch a segregated streetcar. Though black riders paid the conductor at the front entrance of the car, they had to enter the rear door and sit in back. It wasn’t unusual, he said, for black riders to be left standing in the street by a conductor as they made their way alongside the car to enter in back.

To prevent this, the young Lafayette would usually run ahead of his grandmother to put his foot on the steps to the rear door to keep it open so they could board the streetcar. On this particular day, however, as they ran toward the back door, his grandmother fell in the street. He recalled reaching for her and the door as the streetcar pulled away.

“I was not able to do either successfully,” he said, “and I remember how I felt. That emotional memory will never go away. It felt like a sword had cut me in half. I was the victim in that sense.

“I said to myself, ‘When I get grown, I’m going to do something about this problem,’” he continued. “So my motivation for getting involved in the movement was not so much so that my grandchildren could have a better life. I wanted it immediately so that my grandmother would be able to have the opportunity to be treated as a human being after all the years she had lived.”

In the audience was Lafayette’s friend and fellow civil rights soldier Ernest “Rip” Patton, both veterans of the Nashville lunch counter sit-in movement and Freedom Rides.

Patton also shared his memories from the front lines during a voting-rights panel discussion held Oct. 28 in same room. Both men were trained in nonviolent protests by the Rev. James Lawson, a lion of the movement who visited MTSU last month with his fellow activist, the Rev. C.T. Vivian.

Lafayette spoke of the social symbolism behind the lunch counters during segregation and how segregationists knew that if black and white people had the opportunity to frequently sit down to a meal together, everyone would soon enough find out that “difference really doesn’t make a difference.”

Pat Embry, director of the John Seigenthaler Chair of Excellence in First Amendment Studies at MTSU, served as moderator for Lafayette’s appearance. In introducing him to the audience, he read a quote from the late Pulitzer Prize-winning journalist David Halberstam, who covered the Nashville civil rights movement for The Tennessean.

“(Halberstam) said, ‘Of all the people in the civil rights movement, Bernard Lafayette was the easiest one to underestimate. He’s a very quiet American hero,’” Embry said.

Lafayette was only in his early 20s when he co-founded the Student Nonviolent Coordinating Committee and was a key organizer of the Selma voting rights campaign and the “Bloody Sunday” march depicted in the movie “Selma,” which was shown Oct. 28 during the symposium.

“There comes a time when you have to take a stand and be recognized as a human being,” Lafayette said.

While cautioning those with activist ambitions to remember that you can’t accomplish all of your goals all at once, he also reminded the audience that there are still segregationist laws on the books in the state of Tennessee that have not been repealed.

Since 2006, Lafayette has served as Distinguished Senior Scholar in Residence at the Candler School of Theology at Emory University in Atlanta. He is chairman of the board of the Southern Christian Leadership Conference, founded by Dr. Martin Luther King Jr.

The MTSU Social Science Symposium has been held every year since 1991 to provide MTSU students with a forum for presenting their research.

With a theme of “Voting Rights 1965-2015: Commemorating 50 Years,” this year’s symposium will celebrate the anniversary of the Voting Rights Act while looking at the work that still needs to be done, organizers said.

All events are free and open to the public.

A searchable campus parking map is available at http://tinyurl.com/MTSUParking2015-16. Off-campus visitors attending events should obtain a special one-day permit from MTSU’s Office of Parking and Transportation at http://www.mtsu.edu/parking/visit.php.

The symposium has been held every year since 1991 to provide MTSU students with a forum for presenting their research. Student paper sessions will be held from 8 a.m. until noon both days in the Hazlewood Room and Dining Room C. Symposium activities end at 4 p.m. both days.

Following the panel, the movie “Selma” will be shown, followed by a Q&A session moderated by Dr. Louis Woods, an associate professor of African-American history at MTSU.

Lafayette, 75, has been a civil rights movement activist, minister, educator, lecturer and is an authority on the strategy on nonviolent social change. You can listen to his recent interview on the “MTSU on the Record” radio program at www.mtsunews.com/Lafayette-civil-rights-2015.

Among the many leadership positions held during more than a half-century of service, Lafayette is a former president of the American Baptist College of ABT Seminary in Nashville, Tennessee and former Scholar in Residence at the Martin Luther King Jr. Center for Nonviolent Social Change in Atlanta.

In presenting the National Civil Rights Museum’s National Freedom Award for 2012, the following statement was made about Lafayette: “He never stopped believing in the future even when he was arrested with other riders in Jackson, Mississippi, and jailed in Parchman State Prison Farm in 1961.”

Lafayette is the author of the newly published “In Peace and Freedom: My Journey in Selma.”

Georgia Congressman and fellow civil rights legend John Lewis, in his foreword to the book, states, “A powerful history of struggle, commitment, and hope. No one, but no one, who lived through the creation and development of the movement for voting rights in Selma is better prepared to tell this story than Bernard Lafayette himself.”

Since 2006, Lafayette has served as Distinguished Senior Scholar in Residence at the Candler School of Theology at Emory University in Atlanta. He is chairman of the board of the Southern Christian Leadership Conference, founded by Dr. Martin Luther King Jr.

For more information about the symposium, contact Dr. Andrew Wyatt at 615-904-8487 or Andrew.Wyatt@mtsu.edu or Connie Huddleston at 615-494-7914 or Connie.Huddleston@mtsu.edu or visit www.mtsu.edu/soc/socsymp.