School of Agribusiness and Agr.. 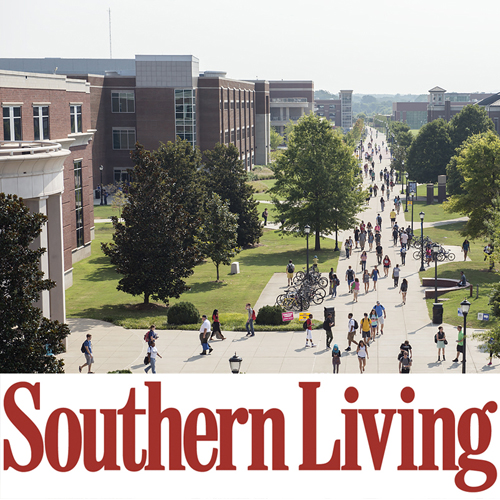 Citing its “small-town charm,” impressive growth and a university in MTSU that is beloved by its alumni, fan base and supporters, Murfreesboro has been named by Southern Living magazine among the “South’s Best College Towns.”

Murfreesboro was among the 21 “small towns” described by the magazine in its travel section as “some true hidden gems of the South.” The magazine defined “small town” as a city of 350,000 people or less and places in which “the college is a driving force in the character of the town,” notes the listing on www.southernliving.com.

In describing Murfreesboro, the magazine noted MTSU’s “well-respected” recording industry program and its close proximity to Music City Nashville, making it easy to find live music in parks and restaurants as well as at events such as Main Street Murfreesboro’s JazzFest, strongly supported by the MTSU School of Music.

The magazine also noted that Middle Tennessee State University and the other selected schools were “exploring truly exciting academics and research that promise to reach the wider world.” The University of Tennessee-Knoxville was the only other Tennessee town on the list. See the full list at http://tinyurl.com/zg24w47.