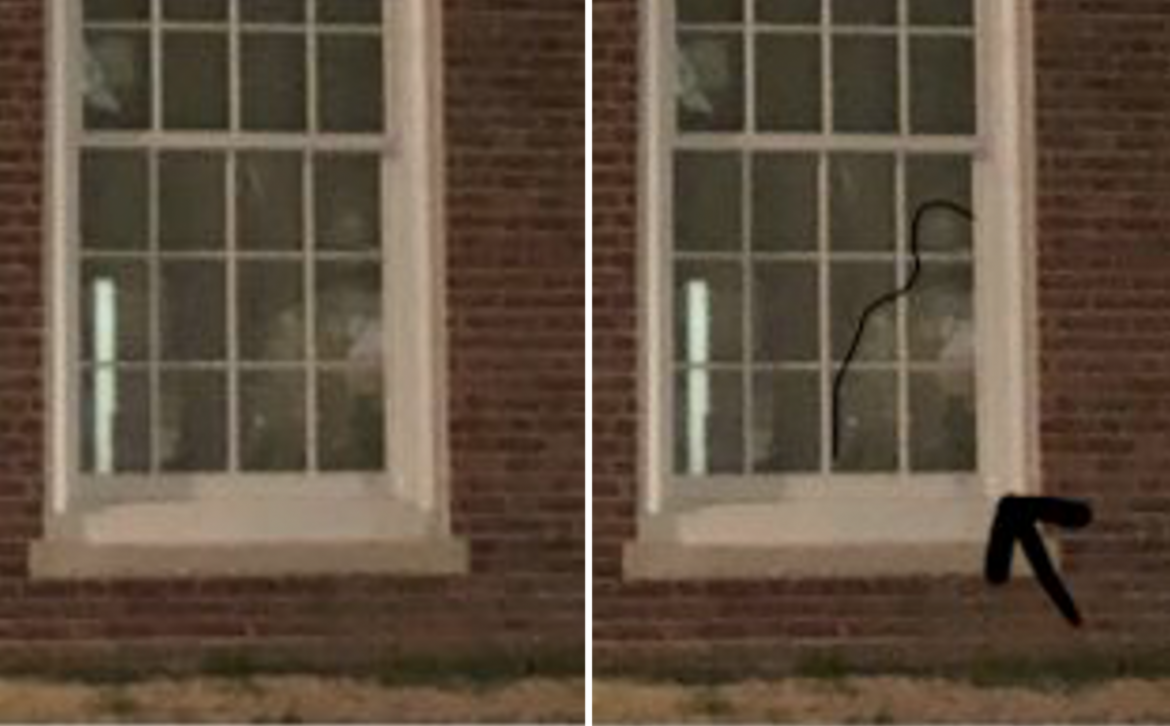 October is a time for leaves to change, pumpkin spice everything, and getting spooked. With Halloween just around the corner, I wanted to be festive. Our campus is over 100 years old. That leaves a lot for history to tell. So, in honor of the spooky season, here are all of the campus ghost stories I was able to find. All of these stories are either recorded in campus records or eyewitness accounts. Are they true? Well, that’s not for me to decide.

A Dead Body at Stark

Don’t worry—not a human body. Just a horse. The story is actually quite wholesome. Wilson’s Allen was a famous walking horse born in 1914. He had a total of 482 foals and of the 70 horses that have won the World Grand Championship, it is believed that only three of them are not directly related to the famous horse. When Wilson’s Allen died, he was buried in Coffee County. However, his body was later exhumed and eventually re-buried in front of Stark Agricultural Building.

There have been several reports of horse hooves galloping down the sidewalk. Of course, there is no horse in sight. So, be careful the next time you’re walking in that area at night. And don’t worry—it’s not someone trying to spook you, it’s just a cute little walking horse with a prestigious family line. 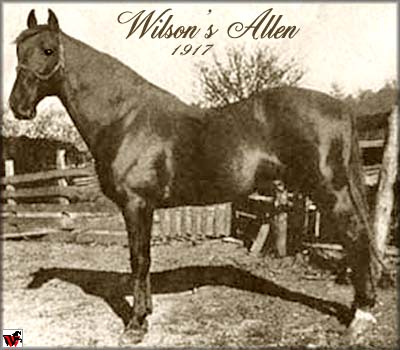 An Encore at Tucker Theatre

There’s just something about theaters, man. Why are they always haunted? As if things in Tucker Theatre couldn’t get dramatic enough, there are two ghosts rumored to haunt the theater.

The first ghost is believed to be a former MTSU professor. The professor allegedly died on a commute to Nashville years prior. A lighting designer was in the theater at night and felt cigarette ashes on his arm. According to a Sidelines’ article from 2019, “[the lighting tech and his friend] would hear movement and see a seat lower in the rows as if someone was sitting in it. Then the smell of cigarette smoke would hit them.” Eventually, the seat would go back up and the smell of the cigarette smoke would disappear. No worries, just an old professor hanging out in the theatre with a cigarette to de-stress after a long day in the afterlife.

The second ghost, also witnessed by the same lighting tech, is a young woman rumored to have died in the theatre. He and a professor were working on a show late at night, the tech witnessed what he thought was a young woman walking up the aisle. The tech also said that she would touch him and do things to get his attention. The tech has reportedly seen the girl multiple times. The same ghost has also been reported to poke people.

The Woman in the Bathroom and Our Seemingly Fearless Lighting Tech

Behind Tucker Theatre is the Boutwell Dramatic Arts Building. One night at around 2 a.m., three students were working on designs for a play in the language lab on the third floor. One of the students was the same lighting tech from the above story. After they were done, the students decided to stick around to see if they could find anything creepy. 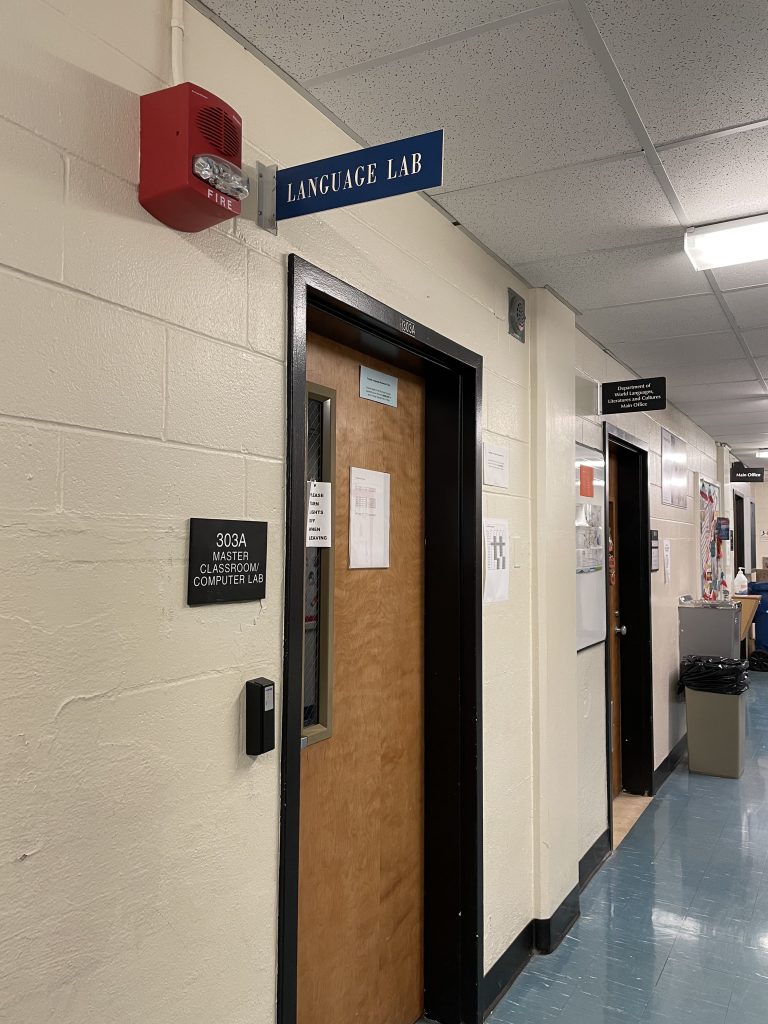 They left the language lab to walk down the hallway. As they were walking back, the door to the language lab – which had been closed – popped open. They decided to follow the activity and enter the lab once again. After being in there for a few moments, the other two students were unconvinced of any activity and began to leave the room. However, they noticed the third student—the lighting tech—wasn’t following them. 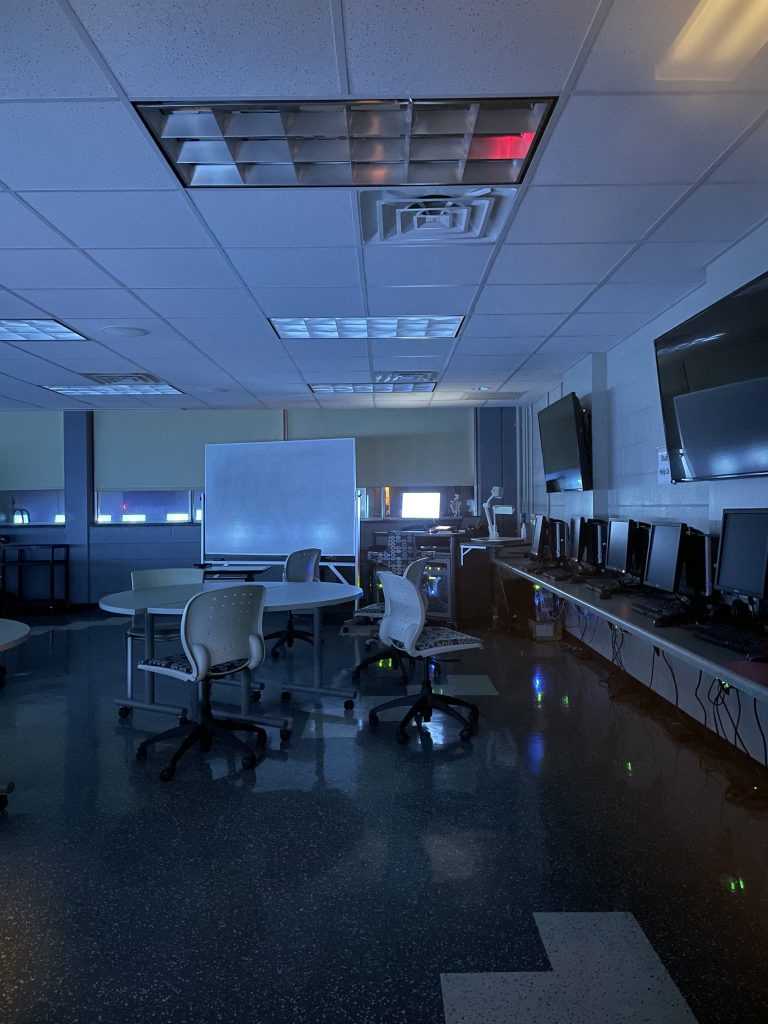 The other two turned back to find him against the far wall. The tech instructed one of them to touch his chest. As the student did so, they noted that the tech felt very hot to the touch. A moment later, the tech began to cry hysterically. He later admitted that he had no clue why it was happening and that he could not control it. Just as suddenly as the crying started, it vanished. The tech regained his composure, uttering a spine-chilling, “She left me.”

The three students began to leave the room again but stopped at the sound of footsteps going down the hallway. Footsteps leading to the women’s bathroom. Only one of the three students was female, so she was the unlucky one that went into the bathroom. Upon entering, she noticed one of the two stall doors was closed. The girl bent down, and sure enough, there were a pair of feet clad with white tennis shoes and pale white ankles. The girl exited the bathroom and joined the two boys again. When she told them there was someone in there, they responded with, “It’s two in the morning. Who would be in there?” 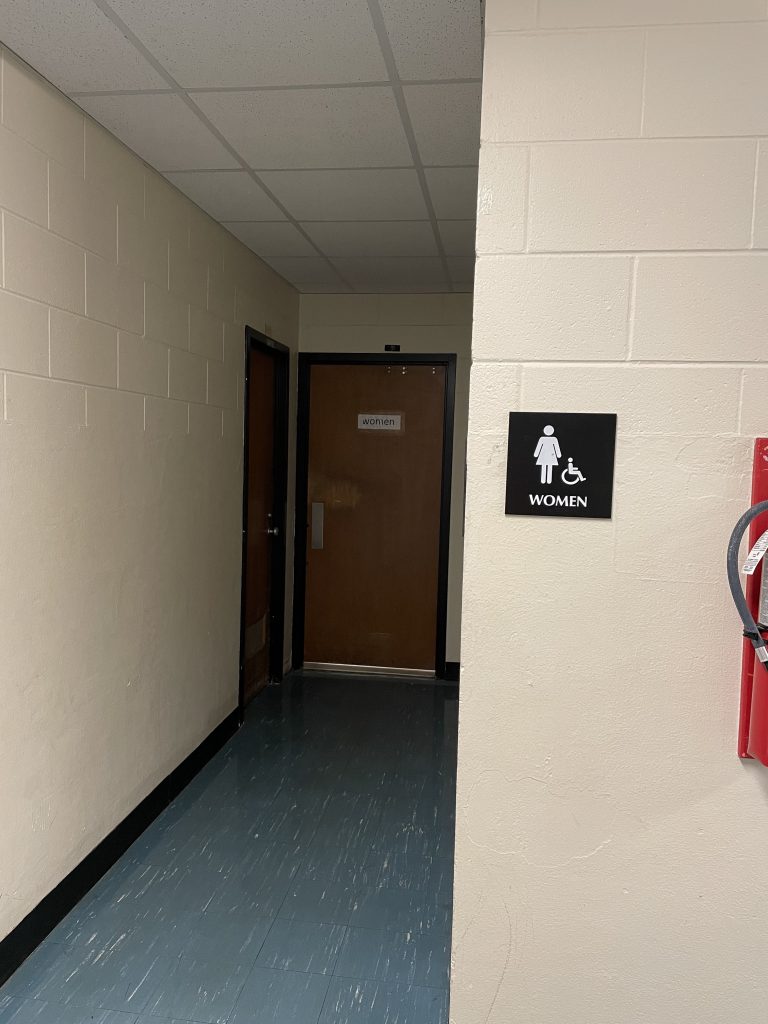 The story then goes on to say that the tech put his hand on the door and received what’s described as a mental “flash.” He saw a college-aged woman with straight black hair wearing a red and white polka-dot dress with white tennis shoes. The tech later said that she looked “absolutely terrified.” He didn’t tell the other boy and girl who were with him at the time. After that, they decided to end the night.

They got in their truck and drove the back way. On the way out, they looked up at the bathroom window. In the window, there was a figure looking out. As the girl sees this figure, a mental image pops into her head. Unlike the tech, she mentions that a picture just appeared in her mind of a young Asian woman with straight black hair and a red and white polka-dot dress.

A couple of nights later, the tech was driving with a friend on campus at night. He slammed on his brakes because a black mass of some sort darted out in front of his truck. Reminded of the woman, the tech then decided to drive around the BDA once again, his curiosity getting the best of him. As they drive and look up into that very same window, there she is. Standing. Staring straight at them.

Only then, did he become scared.

A Bump in the Night at Jones Hall

In doing my research for this article, you know I had to go back to the Albert Gore Research Center. Donna J. Baker and the rest of the staff in the Gore Research Center are absolute blessings and helped me so much. Although we don’t have many ghost stories recorded in campus records, Donna J. Baker, former archivist at the Gore Center, was able to tell me that Jones Hall is one of the buildings on campus that is known for being, well, strange to say the least. “The one building on campus where I have heard strange things happening…is Jones Hall right beside the Gore Center,” Baker said. 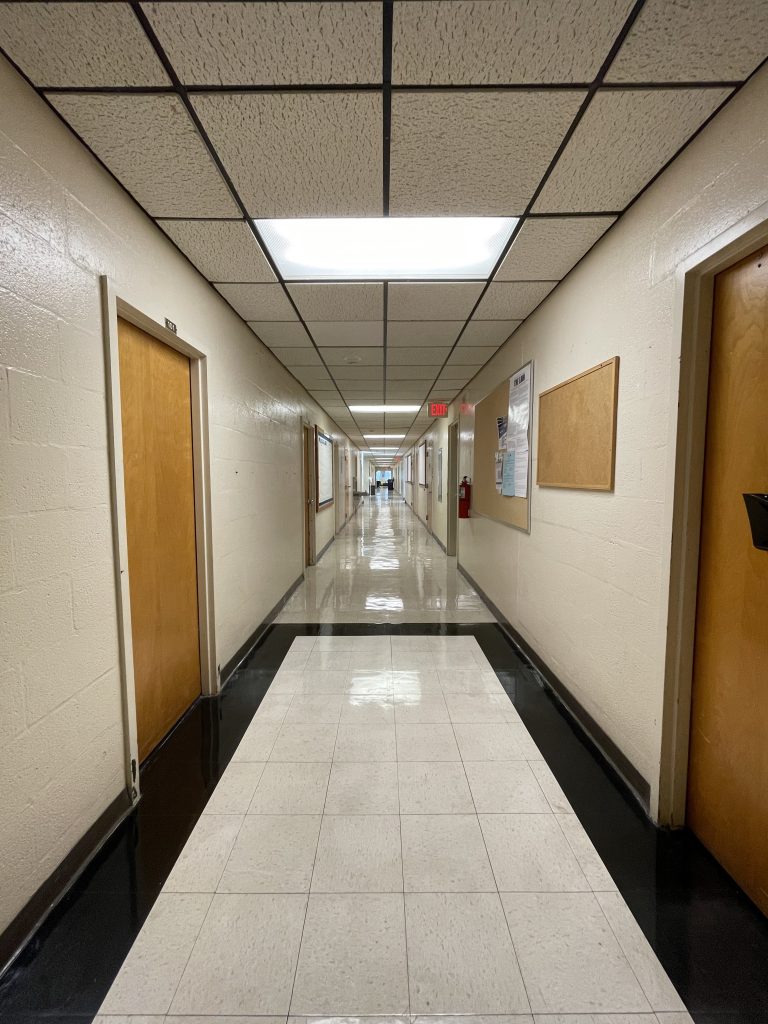 Thank goodness I took this picture during the day and not at night. (Photo: Nicole Alexander)

It’s your typical run-of-the-mill haunting. Doors open and close on their own, lights flash, and footsteps can be heard when—you guessed it – there’s no one in sight! I had to go there not too long ago to meet with a professor and let me tell you, the elevator alone is enough to make me lay awake at night. 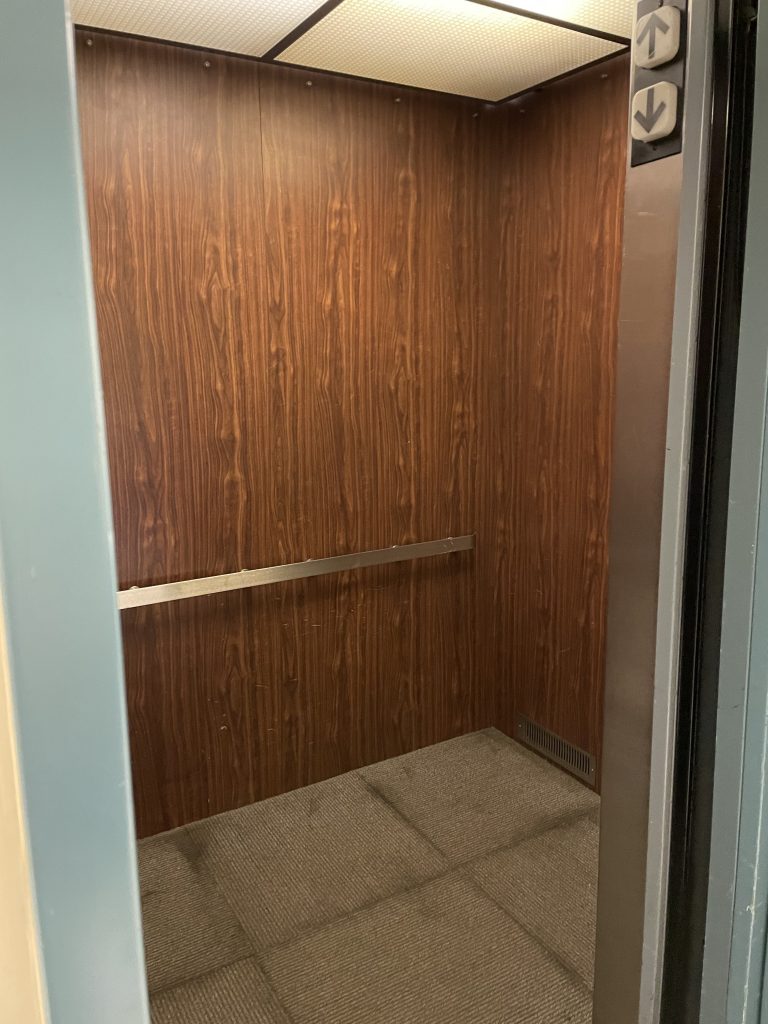 The culprit for these Scooby-Doo-esque hauntings is unknown, but staff like to joke about it being Bob Womack. Womack was a former student that graduated in 1948. He then taught at MTSU as a professor for more than 36 years. Sources joke that he was quite the character.

One of the only spirits by name believed to still linger on campus is Jessie Pauline Alsup. Alsup tragically died in 1922 from complications of pneumonia. She acted as the president of the Young Woman’s Christian Association on campus. The association was passionate about the empowerment of women and combatting racism. She was seemingly loved by everyone on campus and even called “one of the most popular co-eds of the 1920-1921 school year.” (Sidelines, 1950.)

Sometimes when in this area at night, people report movement in the dark, strange shadows and whispering. Many believe it could be Alsup still hanging around the campus she was so invested in all those years ago. 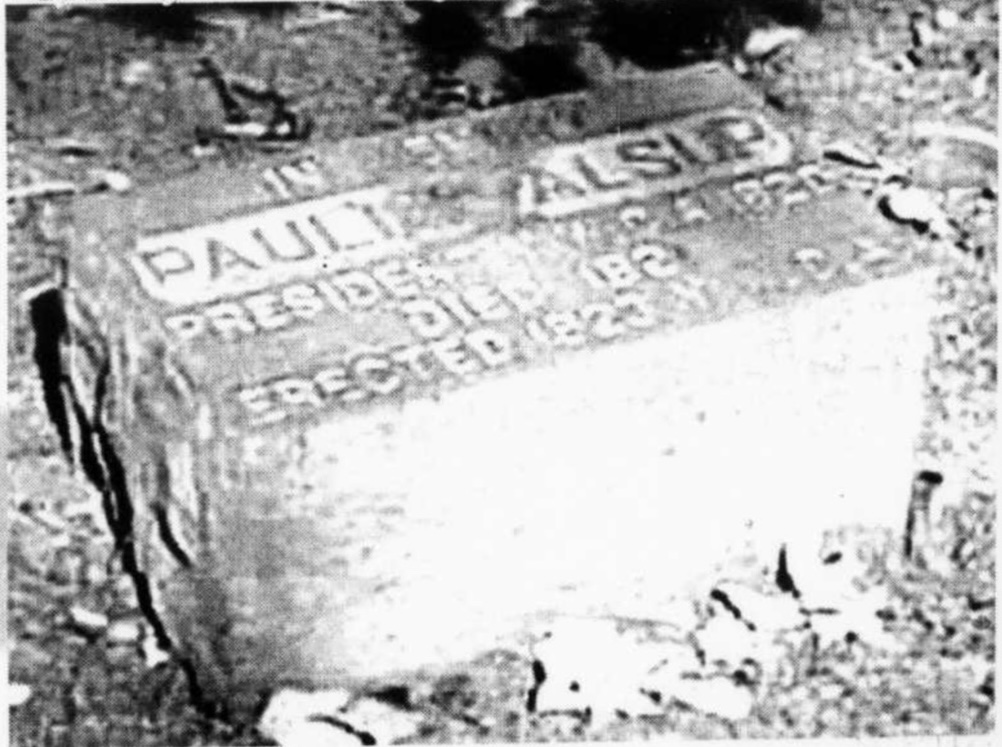 The Memorial for Alsup. Some say it still exists. After searching for hours, I have yet to see it. (Photo: Sidelines)

A Ghost in the Window

One night in 2018, Nathan Igot was skating around campus. He stopped to take a break next to the south side of Wiser-Patten Science Hall. It was 9:40 p.m. and all of the doors to the building were locked, as classes were finished for the day. Yet, Igot noticed a figure in the window. He pulled out his phone to take a picture and uploaded it to the MTSU Class of 2020 Facebook page. Many other students confirmed that they were seeing what he was seeing; it was a clear figure of a man in the first-floor window of Wiser-Patten Science Hall. 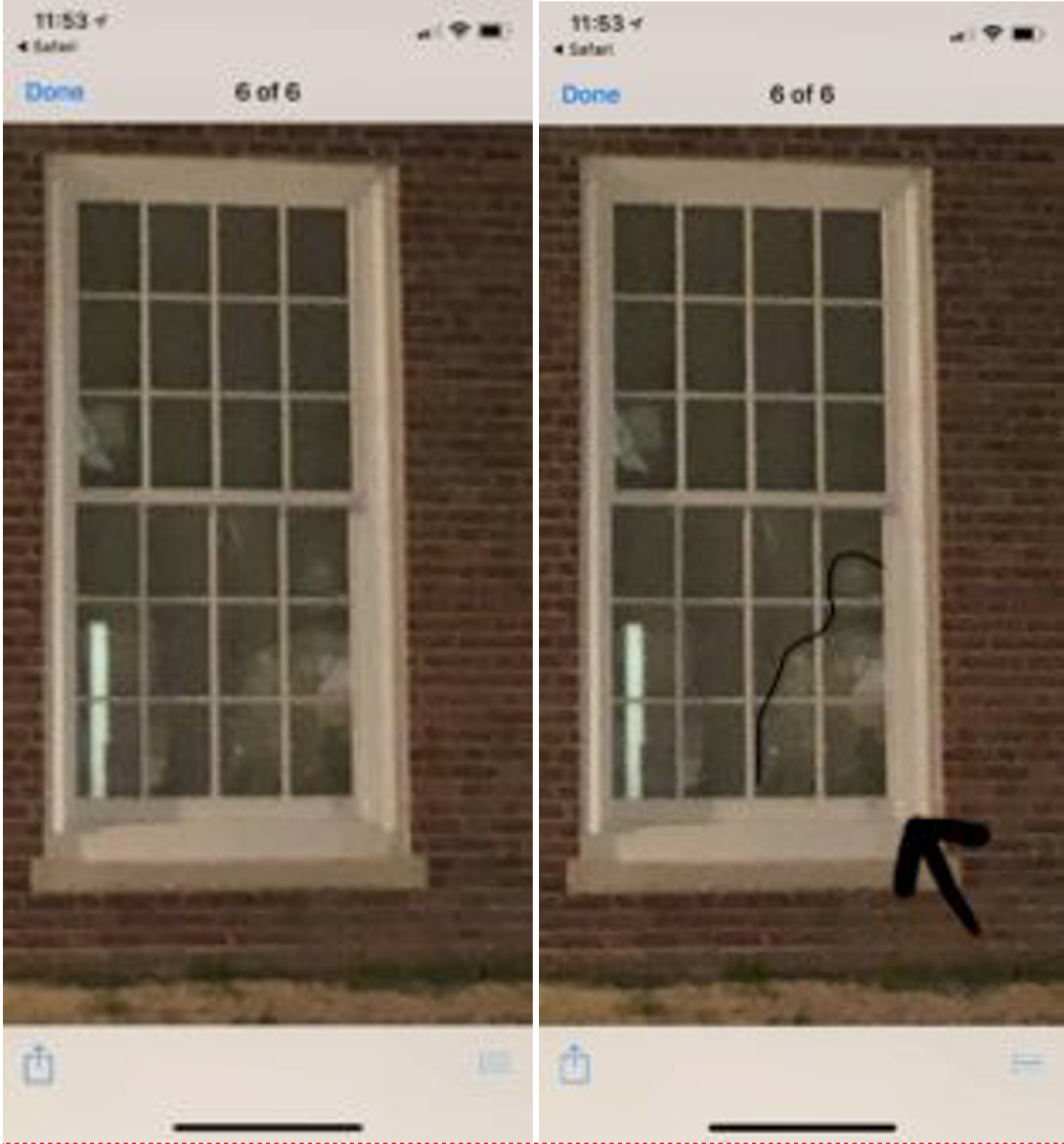 So, who is this man? We may never know.

When gathering information for this article, I had a lot of help from the likes of the Gore Center, the Alumni Association, and the MTSU History club. In other news, I may or may not be sleeping with a light on tonight. Although we may never know if these hauntings are true, there will always be that question of “what if?” Regardless of whether or not it’s “real,” I can tell you confidently that I will not be using the bathroom on the third floor of the BDA anytime soon.