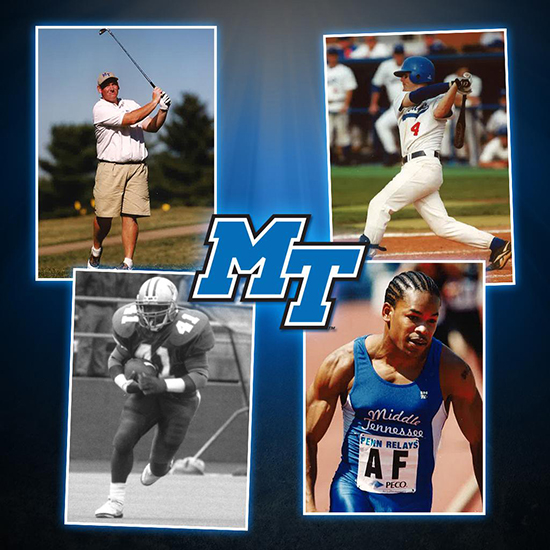 The 2015 class of the Middle Tennessee State University Blue Raider Athletic Hall of Fame features four stars from the past, each rightfully earning the label “champion” during his playing days on campus.

Their induction ceremony is set for Saturday, Oct. 17, at the Kennon Sports Hall of Fame building on the MTSU campus, before the Blue Raiders’ football game with Florida International University.

This year’s group of honorees brings to 131 the number of former MTSU athletes, coaches, administrators and contributors in the Blue Raider Hall of Fame.

Bayless, one of former football head coach Boots Donnelly’s bevy of highly gifted running backs, proved to be an elite multi-purpose threat as he caught and carried the ball and returned kickoffs, amassing more than 4,000 total yards in his career from 1991 to 1994.

With this total, he ended his career ranked fifth all-time in total yards gained. On 16 occasions in his career, the Knoxville, Tennessee, native darted and dashed his way past the 100-yard mark.

Renick spent two years with the Blue Raiders at the turn of the 21st century (2000-01) and quickly made his mark on the baseball diamond, helping MT to Ohio Valley and Sun Belt conference championships and two NCAA regional appearances.

An outstanding second baseman, batsman and base-stealer, the Sarasota, Florida, native was the Sun Belt Conference’s player of the year in 2001 as well as a third-team All-American that year.

He ended his career with a .381 batting average, ranking him third all-time in the Blue Raider record book. In that 2001 season, Renick batted a stunning .420, third highest in school history.

Scales has the distinction as the only Blue Raider trackman to win an NCAA sprints championship. In 2003, he sprinted to the 100-meter dash title in a blistering time of 10.25, earning one of his seven career All-American honors.

In that same 2003 NCAA championship meet, Scales earned a second All-America honor as a member of the third-place 4 x 100 relay team, which also set a school record.

The Franklin, Tennessee, native was honored as the SBC Athlete of the Year in 2003. During his Blue Raider career, Scales helped MT win three Sun Belt Conference indoor titles and one outdoor title.

The Blue Raiders rallied around their top golfer each year and captured OVC team titles in 1998 and 2000 and a third-place finish in 1999. The 2000 Blue Raiders also earned an invitation to the NCAA East Regional and finished 18th.

In 2000, Alexander became the first Blue Raider golfer to be nationally ranked in NCAA Division 1 competition. He won six tournament titles for the Blue Raiders, a career total that ranks second in the school’s record book.

You can read a more detailed version of this story here.