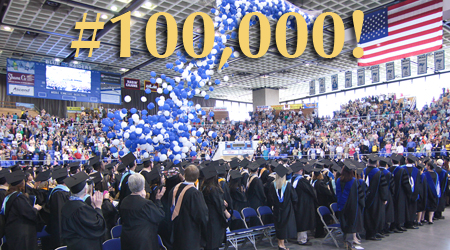 Balloons dropped, thousands cheered and a record new crop of graduates celebrated a milestone in their lives as Middle Tennessee State University awarded its 100,000th undergraduate degree during its Centennial commencement ceremonies May 5.

New MTSU graduates watch as balloons descend from the rafters of Murphy Center to celebrate the university’s issuance of the 100,000th undergraduate degree at the spring 2012 morning commencement. (MTSU photos by Classic Photography)

“This has been a remarkable year on our campus,” MTSU President Sidney A. McPhee said, citing a year of once-in-a-lifetime celebrations, events, special guests and accomplishments for the Murphy Center crowd and those watching worldwide via streaming Internet feed.

“For more than a century, MTSU has taken very seriously its responsibility to provide a high-quality, accessible education for the people of Tennessee and the region,” he said. “While the university’s growth has been exponential over the last two decades, we have never wavered from our commitment to the individual success of our students and to academic quality.

“As you (graduates) become increasingly more successful and make your mark on the world, remember this day. You now are a part of our tradition of excellence. … This is just the beginning of even greater things to come.”

The university awarded a record 2,535 degrees from its eight colleges to students in dual ceremonies, including its first two doctorates in math and science education. The 100,000th undergraduate degree was conferred during the morning event.

NCAA President Dr. Mark A. Emmert pauses during his special comments to new MTSU graduates during the morning commencement ceremony.

With the Centennial commencement ceremonies, MTSU has graduated more than 110,000 students since its inception in 1911, awarding its first doctoral degrees in 1972.

“No single thing in your life will change your life more than what you are about to do today,” Dr. Mark A. Emmert, president of the National Collegiate Athletic Association and guest speaker for the morning commencement ceremony, told the degree recipients.

Emmert noted that because of America’s participation in competitive sports, new U.S. graduates are even more poised to compete in the international workforce.

“Other nations know their students are very good at math, at science, at mastering new skills, but they look at you and see people more experienced in teamwork, in leadership and competition,” the NCAA chief said. “The advantage you have is the American culture that supports a competitive spirit.”

Dr. Ribo Huang, president of Guangxi Academy of Sciences in China, encourages new MTSU graduates to “reach out to grab” opportunities during his afternoon commencement address May 5.

Middle Tennessee State Normal School opened in 1911 to educate Tennessee’s teachers. In that century, MTSU has grown one of three small state schools with 125 students on 100 acres to Tennessee’s largest undergraduate institution with more than 26,400 students on 500-plus acres.

Dr. Ribo Huang, president of Guangxi Academy of Sciences in China, encouraged graduates at the afternoon ceremony to “open yourselves up to opportunities and reach out to grab them.”

One such opportunity, he said, is the new partnership between MTSU and Guangxi Academy to create the Tennessee Center for Botanical Medical Research, which will study extracts from herbs used in traditional Chinese medicine and develop new medicines to combat disease.

“Great things will result from this collaboration,” Huang said, adding that MTSU is “renowned for its higher education with such an international outreach.”

“You laughed, you cried, you may have cursed, but you have accomplished a major goal in your life,” Huang told the new graduates. “There will be challenges, obstacles and difficulties in your life. Work hard for your family, your community and your country, and you will excel.”